ON THE GERMAN OCCUPATION LOAN FROM GREECE

- all those who forget the past cannot have a future 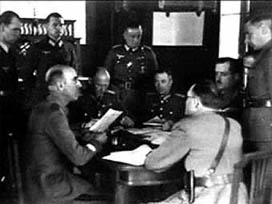 During the early 1940s, Berlin, in order to have financial means of securing its strategic objectives in the Balkans, the Mediterranean basin and Libya, had imposed the most strict conditions on Greece, under occupation, to finance and feed the German armies active in the area. Greek agriculture was almost entirely feeding the German armies in the Libyan front.

The German objective in Libya was oil…in Greece it was the protection of the Balkans which provided 20% of German military needs in Stibium and antimony hydride, 50% of mineral oils, 60% of boxite and 100 of nikel oxide and tungsten. At the same time Greece was the only entry point for the Allies to counteract German influence in the Balkans.

Consequently the imposed capitalisation of the German military by Greece was extremely harsh - even the Greek government of PM Tsolakoglou, an ally of the Germans, was coming under pressure as the financial weight on the people was unbearable. Mussolini, on the other hand, and German Chancellor Gunter Altenburg, based in Athens, had tried to intervene by advising Berlin to lower its expectations from Greece as things on the ground were coming to a head.

The unbearable weight of capitalisation of the German military by Greek finances was made worse by the complete pillage and looting of all movable goods by the occupation forces. The result was famine…..Altenburg had already contacted Berlin warning of the coming famine. At the same time, the Papal Nuncio A. Ronkali, later to become Pope John, had conducted a study indicating that deaths through famine had tripled in the Athens/Piraeus area during the winter of 1941- 42. Goebbels is known to have written in his diary: “Famine (in Greece) has become a serious problem - people are dying in their thousands in the streets of Athens….” London, on the other hand, had decided against supplying foodstuff to the Greek population “….in order to encourage them to resist”!!

Germany was confronting a contradictory situation: On the one hand, the need to increase and continue the capitalisation of their Armies by the Greek economy, on the other the famine that was leading the population to resist and fight. To resolve the issue the Occupation Forces, in October 1941, sent a number of financial experts to analyse and report on the situation. The problem was also high on the agenda of the Italian/German Financial Summit in Rome, during March 1942, where contradictory positions could not resolve the issue.

It was at this point that the Italian banker and Regent in Greece d’Agostini proposed that Greece borrows as a country in order to confront its problems. This meant that the impoverished Greek State, under occupation, would borrow from both Italy and Germany in order to be able to pay for the German military adventure.

The agreement for the loans was signed on March 14 1942 by Altenburg and Gidzi - Regents of the two occupying powers. There were no invitations issued to the Greek Government and there were no Greeks present. Altenburg announced the loan to the Greek Government through his note 160/23.3.1942 and Gidzi, d’Agostini’s second-in-command with his letter ??4/6406/461/23.3.1942.

The agreement stipulated the following:

This ‘agreement’ was drafted by the Italian and German governments and was imposed on the Greeks. The withdrawals was to be monthly, the amount of which remained fluid. There was no date set for the payment process. The Greek Minister of Finance, allied to the Germans, with his confidential memo 4092.4.1942, instructed the Managing Director of the Bank of Greece to prepare the relevant documents and begin the process of fund withdrawal. This initial draft, imposed on the Greek government, was over the following period slowly changed and finally became a standard loan, agreed by all the three signatory parties.

The first change was agreed on December 2 1942, about a year after the loan’s operation, specifying that the amount of the loan would be “predicated in the future” and payments would begin on April 1943 (Article b, paragraphs 2 and 3). While, originally, the Greek government paid two monthly instalments, the payments stopped after the third month, and the loan thus became overdue and started accumulating interest. According to the Bank of Greece figures, the unpaid and overdue element of the loan had reached over $ 2.27 million by 1944. Altenburg calculated the final figure was around 400 million DM - these figures would translate to tens of millions of € in today’s money.

In conclusion, this loan, taken by the Greek Government under occupation, is a standard loan with interest charged from April 1943. It is a standard obligation and responsibility of the German Government and does not fall into the context of the London Agreement in 1953 that stipulated that all German responsibilities for war reparations and compensations would come to an end.

C. Greek Claims on the loan

Greece, in all three international Conferences that took place following the defeat of Germany, i.e in 1945 in what was called the reparations conference, in the 1946 conference that took place in Paris and in the November 1947 Major Powers Conference, separated the issue of the loan from the question of war reparations and asked for its repayment. It has continued to demand the repayment of the loan ever since.

Germany has consistently rejected the Greek arguments. They first argued that the loan was covered by the 1953 London Agreement on reparations. Then they brought up the claim that the Greek PM Karamanlis had renounced on the claim - a question that was supposedly settled in 1967.
Their final argument has been that such claims have become redundant after 50 years - overlooking the fact that Greece first raised the issue in 1945.

The German arguments are of no legal or logical substance. The last remaining possible point that the German government today had no jurisdiction on a divided Germany has come to an end after Germany’s unification. It is our opinion that the claim on the loan is both legally and politically sound. The claim can be lodged by the Greek Government, by the Bank of Greece as well as the Greek people through their political representatives. There is also the precedence of Yugoslavia and Poland, in 1956 and 1971 respectively, whose governments were paid by Germany on the basis of similar loans imposed on them during the Nazi occupation

Germany today must remind itself that the very imposition of the loan was against Article 49 of the Hague Convention  (1909) which is still in force today. They imposed a loan on a State that they themselves had characterised as being indestructible and that the Nazis not only had never denied that the loan had taken place but started paying back parts of it, Let us also remind ourselves that in 1964 Chancellor Erhardt had agreed for the payment of the loan after the unification of his country.

Germany should remind itself that its occupation of Greece increased inflation in that country by 15.000.000% - a world record not broken since. Greece was also the only country under occupation to pay Germany war reparations…..for the number of German soldiers killed by the Greek Resistance.  The Italian Gidzi recognised this situation stating clearly that “Greece is being squeezed like a lemon”. Mussolini, himself, is quoted as saying: “Germans stole from the Greeks even their shoelaces”! And the German Minister of Finance Funk, in June 1943, wrote in an article: “Greece suffered from this war more than any other country”.

Greece was estimated that it needed 33 times its 1946 GDP in order to repair the damage the Germans wrought on it. This money could only be brought in through external borrowing. In this context, it is a great pity that the democratic and united Germany is still refusing to repay today the loan it imposed on the Greeks. This behaviour not only attacks and wounds any pro-German feelings of the Greek people, as mentioned by Chancellor Kohl, but creates a very negative environment in the current EU negotiations on the crisis.

This article by Tasos Iliadakis was first published on January 25 2010 in the daily paper ‘The Country’ in Crete. It was translated by Michael Youlton of ILR (March 1st 2010).

Tasos Iliadakis is a Mathematician and has a Phd in Sociology and Political Science. He also lecturers in the National Insurance and Security College. He was a member of the Greek delegation that participated in the London International Conference on Nazi gold (1997), a presenter on the Greek - German Conference in Delphi (2006) and the 2005 National Conference in Alexandroupoli in 2005 on the Public Debt.

This article was first published on January 25 2010 in the daily paper ‘The Country’ in Crete and was translated by Michael Youlton of ILR (March 1st 2010).

Photo is of Georgios Tsolakoglou discussing the third and final protocol of surrender of the Greek Army of Epirus with German General Alfred Jodl and Italian General Ferrero. Thessaloniki, 23 April 1941

Richest 1% bag nearly twice as much wealth as the rest of the world put together over the past two years by Oxfam The super-rich outstrip their extraordinary grab of half of all new wealth in...

The House Speaker Crisis and the Transformation of the Republican Party

The House Speaker Crisis and the Transformation of the Republican Party By oaklandsocialist The last two times members of the House of Representatives had to resort to multiple ballots to elect...