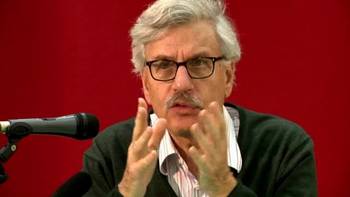 I. The ecological crisis is already the most important social and political question of the 21st century, and will become even more so in the coming months and years. The future of the planet, and thus of humanity, will be determined in the coming decades. Calculations by certain scientists as to scenarios for the year 2100 aren’t very useful for two reasons: a) scientific: considering all the retroactive effects impossible to calculate, it is very risky to make projections over a century. B) political: at the end of the century, all of us, our children and grandchildren will be gone, so who cares?

II. As the IPCC explains, if the average temperature exceeds the pre-industrial period’s by 1.5°, there is a risk of setting off an irreversible climate change process 1. The ecological crisis involves several facets, with hazardous consequences, but the climate question is doubtless the most dramatic threat. What would the consequences of this be? Just a few examples: the multiplication of megafires such as in Australia; the disappearance of rivers and the desertification of land areas, melting and dislocation of polar ice and raising the sea level, which could reach dozens of meters. Yet, at two meters vast regions of Bangladesh, India and Thailand, as well as the major cities of human civilisation – Hong Kong, Calcutta, Venice, Amsterdam, Shanghai, London, New York, Rio - will have disappeared beneath the sea. How high can the temperature go? From what temperature will human life on this planet be threatened? No one has an answer to these questions.

III. These are risks of a catastrophe unprecedented in human history. One would have to go back to the Pliocene, some millions of years ago, to find climate conditions similar to what could become reality in the future, due to climate change. Most geologists consider that we have entered a new geological era, the Anthropocene, when conditions on the planet have been modified by human action? What action? Climate change began with the 18th Century Industrial Revolution, but it is after 1945, with neoliberal globalisation, that it took a qualitative leap. In other words, modern capitalist industrial civilisation is responsible for the accumulation of CO2 in the atmosphere, thus of global heating.

IV. The capitalist system’s responsibility in the imminent catastrophe is widely recognised. Pope Francis, in his Encyclical Laudato Si, without uttering the word ‘capitalism’ spoke out against a structurally perverse system of commercial and property relations based exclusively on the ‘principle of profit maximization’ as responsible both for social injustice and destruction of our Common House, Nature. A slogan universally chanted the world over in ecological demonstrations is ‘Change the System, not the Climate!’ The attitude shown by the main representatives of this system, advocates of business as usual – billionaires, bankers, ‘experts’, oligarchs, politicians – can be summed up by the phrase attributed to Louis XIV: ‘After me, the deluge’.

V. The systemic nature of the problem is cruelly illustrated by governments’ behaviour. All, (with very rare exceptions) acting in the service of capital accumulation, multinationals, the fossil oligarchy, general commodification and free trade. Some of them - Donald Trump, Jair Bolsonaro, Scott Morrison (Australia) – are openly ecocidal and climate deniers. The other, ‘reasonable’ ones set the tone at the annual COP (Conference of the Parties or Circuses Organised Periodically?) meetings, which feature vague ‘green’ rhetoric and total inertia. The most successful was COP 21, in Paris, which concluded with solemn promises from all governments taking part to reduce emissions – not kept, except by a few Pacific islands. Scientists calculate that even if they had been kept, the temperature would still rise up to 3.3° higher...

VI. ‘Green capitalism’, ‘carbon markets’, ‘compensation mechanisms and other manipulations of the so-called ‘sustainable market economy’ have proven perfectly useless, while ‘greening’ with a vengeance, emissions are skyrocketing, and catastrophe gets closer and closer. There is no solution to the ecological crisis within the framework of capitalism, a system entirely devoted to productivism, consumerism, the ferocious struggle for ‘market shares’, to capital accumulation and maximizing profits. Its intrinsically perverse logic inevitably leads to the disruption of ecological balance and destructions of ecosystems.

VII. The only effective alternatives, capable of avoiding catastrophe, are radical alternatives. ‘Radical’ means attacking the root of the evil. If the capitalist system is at the root, we need anti-system alternatives, i.e. anticapitalist ones, such as ecosocialism, an ecological socialism up to the challenges of the 21st century. Other radical alternatives such as ecofeminism, social ecology (Murray Bookchin), André Gorz’s political ecology, or degrowth have much in common with ecocialism: relations of reciprocal influence have developed in recent years.

VIII. What is socialism? For many Marxists, it is transformation of the relationships of production – by the collective appropriation of the means of production – to allow the free development of productive forces. Ecosocialism lays claim to Marx, but explicitly breaks with this productivist model. Of course, collective appropriation is indispensable, but the productive forces themselves must also be transformed: by changing their energy sources (renewables instead of fossil fuels); b) by reducing global energy consumption; c) by reducing production of goods (‘degrowth’), and by eliminating useless activities (advertising) and harmful ones (pesticides, weapons of war); d) by putting a stop to planned obsolescence. Ecosocialism also involves transformation of consumption models, transport forms, urbanism and ‘ways of life.’ In short, it is much more than a change of property forms: it is a civilizational change, based on values of solidarity, equality, and respect for nature. Ecosocialist civilisation breaks with productivism and consumerism, in favour of shorter working time, thus more free time devoted to social, political, recreational, artistic, erotic etc activities. Marx referred to this goal by the term ‘Realm of freedom’.

IX. To achieve the transition towards ecosocialism, democratic planning is required, guided by two criteria: meeting actual needs, and respect for the ecological balance of the planet. The people themselves, once the onslaught of advertising and the consumption obsession created by the capitalist market are eliminated – who will decide, democratically, what their real needs are. Ecosocialism is a wager on the democratic rationality of the popular classes.

X. This requires a real social revolution. How can such a revolution be defined? To carry out the ecosocialist project, partial reforms will not suffice. We could refer to a note by Walter Benjamin, on the margins of his theses On the concept of history (1940): ‘Marx said that revolutions are the locomotive of world history. But things might work out otherwise. It is possible that revolutions are the act by which humans travelling in the train activate the emergency brakes.’ Translation in 21st century terms: we are all passengers on a suicide train, which is named Modern Industrial Capitalist Civilisation. This train is hurtling towards a catastrophic chasm: climate change. Revolutionary action aims to halt it – before it is too late.

XI. Ecosocialism is at once a project for the future and a strategy for the struggle here and now. There is no question of waiting for ‘the conditions to be ripe’. It is necessary to provoke convergence between social and ecological struggles and fight the most destructive initiatives by powers in the service of capital. This is what Naomi Klein called Blockadia. Within mobilisations of this type, an anticapitalist consciousness and interest in ecosocialism can emerge during struggles. Proposals such as the Green New Deal are part of this struggle, in their radical forms, which require effectively renouncing fossil energies – but not in those limited to recycling ‘green capitalism’.

XII. Who is the subject in this struggle? The workerist/industrialist dogmatism of the previous century is no longer current. The forces now at the forefront of the confrontation are youth, women, Indigenous people, and peasants. Women are very present in the formidable youth uprising launched by Greta Thunberg’s call – one of the great sources of hope for the future. As the ecofeminists explain to us, this massive women’s participation in the mobilisations comes from the fact that they are the first victims of the system’s damage to the environment. Unions are beginning here and there to also get involved. This is important, because, in the final analysis, we can’t overcome the system without the active participation of workers in cities and countryside, who make up the majority of the population. The first condition, in each movement is associating ecological goals (closing coal mines or oil wells, or thermal power stations, etc) with guaranteed employment for the workers involved.

XIII. Do we have any chance of winning this battle, before it is too late? Unlike the so-called ‘collapsologists’ who clamorously proclaim that catastrophe is inevitable and that any resistance is futile, we think the future is open. There is no guarantee that this future will be ecosocialist: this is the object of a wager in the Pascalian sense, in which we commit all our forces, in a ‘labour for uncertainty’. But as Bertolt Brecht said, with grand and simple wisdom: ‘Those who fight may lose. Those who don’t fight have already lost.’

*Michael Löwy, activist of the Fourth International, is an ecosocialist, sociologist and philosopher. Born in 1938 in São Paulo (Brazil), he has lived in Paris since 1969. Research director (emeritus) at the CNRS and professor at the École des hautes études en sciences sociales, he is the author of numerous books published in twenty-nine languages, including The Marxism of Che Guevara, Marxism and Liberation Theology, Fatherland or Mother Earth? and The War of Gods: Religion and Politics in Latin America. He is joint author (with Joel Kovel) of the International Ecosocialist Manifesto. He was also one of the organizers of the first International Ecosocialist Meeting, in Paris, in 2007.

Forty Years Later, Reds Is Still One of the Best Films Ever Made About Revolutionary Politics

Forty Years Later, Reds Is Still One of the Best Films Ever Made About Revolutionary Politics By Jim Poe (Jacobin magazine) In 1981, Warren Beatty directed Reds, a retelling of John Reed’s...

A success for CADTM: the world assembly of the network, held in Dakar from 13-16 November, 2021 The Committee for the Abolition of Illegitimate Debt (CADTM) network held its conventional World...