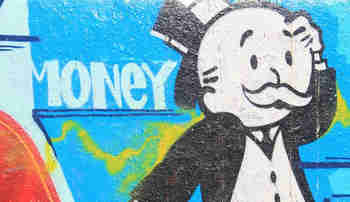 The richest 62 persons now control more than half of the world’s money, according to a new Oxfam report. Total wealth of these individuals is the same as that of the world’s poorest 3.6 billion people. The rich-poor gap is growing wider. The ultra-wealthy group of persons is getting wealthier.

“The gap between rich and poor is reaching new extremes. Credit Suisse recently revealed that the richest 1% have now accumulated more wealth than the rest of the world put together. …Meanwhile, the wealth owned by the bottom half of humanity has fallen by a trillion dollars in the past five years. This is just the latest evidence that today we live in a world with levels of inequality we may not have seen for over a century.”

The poorest 50% of the world’s population is worth an estimated $1.76 trillion, which is also the estimated net worth of the richest 62 persons. In 2010, it required the richest 388 persons to make up the wealth of the bottom 50%. Since then, the world’s richest 62 persons have added 44% to their cash and assets while the wealth of the bottom half has dropped by 41% despite an increase in the global population by 400 million.

In the same period, the wealth of the richest 62 persons increased by $500 billion to $1.76 trillion. Within five years, the majority of the world’s wealth has been consolidated into the hands of less than one-sixth of the number of persons who used to control it. Nine out of 10 World Economic Forum corporate partners had a presence in at least one tax havenand it was estimated that tax dodging by multinational corporations costs developing countries at least $100 billion every year. Corporate investment in tax havens almost quadrupled between 2000 and 2014.

The report cited estimates that billionaires have kept $7.6 trillion in offshore accounts. The amount is more than the combined GDP of the UK and Germany. It said if tax were paid on the income that this wealth generates, an extra $190 billion would be available to governments every year.

There are figures in the report that include a few estimates. A number of free marketers have questioned the credibility of the figures. To a few, the statistics were “bogus” and the data was “misleading”.

However, a lot of facts are from credible sources: Citing G. Zucman’s “Taxing across borders: Tracking personal wealth and corporate profits” (Journal of Economic Perspectives, 2014) the report said: “[A]s much as 30% of all African financial wealth was thought to be held offshore.” The estimated loss of $14 billion in tax revenues would be enough to pay for healthcare for mothers and children that could save 4 million children’s lives a year and employ enough teachers to get every African child into school. Tax revenue lost in Africa, Asia and Latin America combined due to the amount of wealth sitting in tax havens amounts to an estimated $70 billion each year. Citing E. Seery and A. Caistor Arendar’s “Even it up: Time to end extreme inequality” (2014) the Oxfam report calculates: Last year, the average rate of return for billionaires was 5.3 percent, meaning that the richest people made more than $5 million every day from interest payments alone. In the UK, pay packages for FTSE 350 directors increased by more than 250 percent between 2000 and 2013, roughly five times as rapidly as returns to shareholders.

Citing “Do seed companies control GM crop research?” (Scientific American, 2009) the report said: “Some 80 percent of the corn harvested in the US is genetically engineered by Monsanto, a company that also dominates the global research agenda for genetically modified (GM) crops and their safety standards.” It added: “These corporate behemoths not only have the power to set prices to maximize their profits, with little threat of competition, but they also influence the politics of these markets, which has a much further-reaching impact on societies.”

The world’s largest brewing company selling more than 200 brands of beer in Europe, Asia and America, found the report, “has a powerful political voice … It spent $3.7 million lobbying the US government in 2014, and 56 of the 141 lobbying reports it filed were on issues relating to taxation.”

Citing J.E. Stiglitz’s “Market failures in the financial system” (New Vision, 2012) the report said: “Recent scandals across the world involving bankers engaged in predatory and discriminatory lending, abusive credit card practices, market manipulation (e.g. of theLibor rate) and a host of other misdeeds have led to the widespread view that there is also a moral deficiency, a culture of corruption, in the sector.”

“The development of sophisticated tools and instruments to manage financial flows globally”, the report said, “has also allowed companies and individuals to withdraw their money from jurisdictions all over the world illicitly and without being traced. In particular, the banking sector has established a strong presence in tax havens, providing a safe haven for tax dodgers. The majority of offshore wealth is managed by just 50 banks, and the 10 busiest banks manage 40 percent of these offshore assets. Banks have lobbied hard to preserve havens for international corporations looking to avoid taxes.”

The report cites other interesting facts that include, in essence, bribery. Citing a number of sources the report said: “With economic success come power and influence, particularly over the policies and institutions that are designed to control and regulate the sector’s activities. Companies use their financial resources to pay thousands of lobbyists to directly influence policy makers. In 2014, finance and insurance companies spent just under $500m on lobbying activities in Washington alone. Investments by financial companies in research agendas and think tanks also have a big influence: for example, in 2014 the financial sector gave at least £1.3 million to fund the UK’s 18 most powerful think tanks – raising questions about their independence. Stretched government regulators face ‘lawyers, lobbyists, and under-written think tanks – all of whom have the time and money to present extensive, if wildly biased, legal and economic arguments’, according to one analysis.” The sources of these facts are: OpenSecrets.org, “Ranked sectors” (2014), The Bureau of Investigative Journalism “Finance lobby: Big banks and thinktanks” (2012) and Transparify “Corporate interests and think tanks – An overview of current debates” (2014).

Where do the poor stand in this global mechanism that keeps one in nine persons hungry every night? The Oxfam report cites a few facts:
- “The wealth of the bottom half fell by just over a trillion dollars in the same period – a drop of 41%.”
- “Since the turn of the century, the poorest half of the world’s population has received just 1% of the total increase in global wealth, while half of that increase has gone to the top 1%.”
- “The average annual income of the poorest 10% of people in the world has risen by less than $3 each year in almost a quarter of a century. Their daily income has risen by less than a single cent every year.”
- “Workers are capturing less and less of the gains from growth”. And, “the owners of capital have seen their capital consistently grow (through interest payments, dividends, or retained profits) faster than the rate the economy has been growing.”
- “Between 2001 and 2011, wages for garment workers in most of the world’s 15 leading apparel-exporting countries fell in real terms.”
- “While the poorest people live in areas most vulnerable to climate change, the poorest half of the global population is responsible for only around 10% of total global emissions. The average footprint of the richest 1% globally could be as much as 175 times that of the poorest 10%.”

Do the facts/figures startle anybody? They should not. It’s, quoting the report, “an economy for the 1%”, and exploiters’ power at global level is a fact of daily life. The economy for the 1% behaves in this irrational way. This irrational pattern is its rationality. And, it’s the order of the day. Political power, connections/networks, influence trading, lobby-business, dodging laws, regulations and oversight, secrecy/non-transparency, non-accountability, violence/forceful imposition of corrupt rule help increase wealth of the few rich while the poor’s income decline in real terms.

But, from where does the wealth come? Is it an affair-eternity? A lot of good fellows are concerned with the ultra-concentration of wealth but are unwilling to look at the source of wealth. A lot of good fellows are willing to dole out a part of wealth to the have-nots but are unwilling to change the system that concentrates wealth in the hands of a few. The basic questions related to immense wealth under control of a few go unanswered. Hence, the appendix – corruption – goes unattended in a real way. Petty-anomalies attract all attention; but the fountainhead of corruption remains unhindered. It’s a part of the system that concentrates so much wealth in the hands of so few. It’s a part of the “game” that keeps the system of non-representation intact.

Another part of the game is at the level of intellect: not to give any serious thought, not to dissect the issue scientifically; but to provide lip service, copy words without comprehending real and full meanings and implications. It’s intellectual corruption. The practice sounds good, appears dignified, but doesn’t expose the system of biased division of wealth. It’s politically safe also. But, along with these facts, the poor need more facts: identify the source of wealth, identify the source of power that strengthens and safeguards the system of skewed division of wealth. These help fully grasp the reality of inequality.

One of the issues not discussed is the scope to engage with corruption in all forms by class: which class – rich and poor – resorts to corrupt practice to which extent? The scope originates from power – economic power taking form of political power. Impacts of those corrupt practices should also be searched. The poor classes have no power to engage with corruption. Their relation with corruption is only as a victim of corrupt practices by the rich. Even, impact of corrupt practice by a number of poor persons, if it’s hypothetically assumed that a number of poor persons got engaged with corruption, is negligible compared to big money corruption. Exposure of corruption in areas of politics, environment and ecology, diplomacy, inter-state deals including trade pacts/agreements, armaments and infrastructure will starkly show its class biasness – a capacity solely owned by the rich class. A detail search of the issue – corruption – will show much cruel face of rich-poor gap, the inequality.

*Farooque Chowdhury is ex-editor of Paribesh patra, an environmental periodical His writings focus on political economy, environmental sociology, Non Governmental Organization, micro-credit and Marxist theory. He is author of numerous books, the latest one is The Age of Crisis. He is also co-editor of a series of reports on Bangladesh environment - People's Report on Bangladesh Environment.