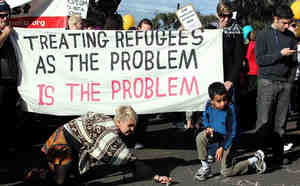 The International Monetary Fund (IMF) on Wednesday released a report urging the European countries accepting a majority of refugees to “temporarily” pay them less than minimum wage.

In its report, the IMF recommended implementing a short-term differentiation between asylum seekers and EU citizens, by way of “temporary and limited derogations of the minimum wage for refugees.”

That would entail giving wage subsidies to companies to employ individuals migrating to Europe to escape war, poverty, and state violence from the Middle East and North Africa, or adopting “temporary exceptions to minimum or entry level wages” for those already hired.

“International experience with economic immigrants suggests that migrants have lower employment rates and wages than natives, though these differences diminish over timea” the report, The Refugee Surge in Europe: Economic Challenges, states.

The IMF claims that the measure would help mitigate the cost of accepting refugees and allow them to find work faster. “Indeed,” the report argues, “the sooner the refugees gain employment, the more they will help the public finances by paying income tax and social security contributions.”

In fact, IMF suggested that high entry wages and stable living situations are actually a barrier to integration, writing, “Low education and poor linguistic skills likely limit the attractiveness of refugees on the job market....Easing restrictions on the geographic mobility of refugees could also allow them to go where labor market prospects are more favorable.”

According to Jordi Angusto, an economist with the European Progressive Economists Network (Euro-PEN) and Spain’s Econonuestra, who spoke with Common Dreams over email, “The IMF is the sancta sanctorum of neoclassical/neoliberal thinking, a theory sustaining that lower salaries increases always the employment.”

The outcomes put forth in the report are unrealistic, he said. “Most probably, the first effect should be a workers substitution (more expensive for less expensive ones), thus increasing the xenophobia amongst substituted and at risk of substitution workers; the second effect, an aggregate decrease of salaries as GDP %, increasing profits and global inequality,” Angusto said. “From the demand side, lower salaries should mean less demand than supply; a lack of demand that, if compensated by exports, should imply a beggar-thy-neighbour strategy, adding pressure to cut wages in third countries.”

Tiffany Williams, associate director at the Institute for Policy Studies, added: “In my field of human trafficking, which shares many similarities with forced migration caused by conflict, advocates know that safe, paid work is one of the keys to helping displaced people rebuild their lives. It is important that the IMF is acknowledging that access to work is crucial. But creating a second class of workers who will be pit against the existing low wage workforce is a risky move which might fuel a deeper anti-immigrant backlash, undercutting efforts to humanely resettle vulnerable families.”

In Germany, which took in more than one million migrants and refugees in 2015, the current minimum wage is 8.50 euros ($9.1). The IMF’s report follows a similar call by the German Council of Economic Experts (GCEE), which in November said, “The minimum wage is likely to pose a barrier to entry [into the job market] for many refugees. Considering the growing supply of low-wage labor the minimum wage should under no circumstance be raised.”

The proposal also comes in stark contrast to the measures recently adopted in Turkey, which currently hosts about 2.5 million Syrian refugees—more than any other country. The Turkish government announced new regulations earlier this month that will allow Syrians who have been living in the country for at least six months to apply for work permits, enabling them to earn the minimum wage or higher.

“Jobs mean dignity,” said Filippo Grandi, the UNHCR high commissioner, “a dignified life where you don’t have to beg for money or to look for money from associations or the government. I think it is very big step.”

In a press release earlier this week, the UNHCR described the hardships refugee families in Istanbul face when their options are limited to low-paying work:

[Grandi] listened as two women spoke of their husbands’ difficult decision to leave to find work in Europe. Others told of the cruel necessity to send their children not to school but to factories to work illegally to help pay for food and rent.

“I heard stories that broke my heart,” Grandi said. “These are real stories of women and children who have lost everything and don’t know what their future is.”

As Angusto told Common Dreams on Thursday, “[P]ublic help to migrants/refugees until they find a ’regular’ job, seems to be fairer and a worthwhile investment in the medium/long term.”

Indeed, said Williams, “instead of lowering standards toward a race to the bottom, countries should make it easier for them to work legally, and invest in programs that help them integrate into their new homes and economies. Austerity measures that lower standards for public services, working conditions, and living conditions will never be the pathway to building an equitable global economy.”