Tiananmen : Commemorating the 26th Anniversary of the June Fourth [1989] Tragedy

At the request of the Tiananmen Mothers, Human Rights in China (HRIC) is issuing the following essay by the group to commemorate the victims of June Fourth on its 26th anniversary. Quoting Premier Li Keqiang’s March 2015 speech that Japan’s leaders today bear historical responsibility for Japan’s war of aggression in China in the 1930s: “the leaders of a state not only inherit their predecessors’ successes, but should also bear historical responsibility for their predecessors’ crimes,” the group asks: “By the same logic, shouldn’t today’s Chinese leaders bear responsibility for the series of crimes—manmade famine and slaughter—perpetrated in their own country by China’s leaders at the time: Mao Zedong and Deng Xiaoping?”

Commemorating the 26th Anniversary of the June Fourth Tragedy

A quarter century has passed since the June Fourth Massacre that took place in Beijing, China’s capital, near the end of the last century. But the truth of this tragedy has to this day not been laid bare to the world, and the massacre victims, who have still not received justice, cannot rest in peace. This is a disgrace for the whole Chinese people, and a disgrace for all of civilized humanity!

For two long decades since year 1995, we, as victims and families of victims of the June Fourth tragedy, have been faithfully writing letters to the Two Congresses and the Chinese leaders—stating that the 1989 Tiananmen bloodshed was not a misdeed by the government, but a crime it committed against its people. We ask for a public and just resolution to the June Fourth issue and seek discussion and dialogue with the government concerning the remaining June Fourth issues. Our three demands are: reinvestigate June Fourth and make public the names and number of the deceased; provide an explanation and compensation to the family of each of the victims in accordance with the law; and prosecute those criminally responsible for the June Fourth tragedy. In summary, we seek truth, compensation, and accountability.

However, our appeals have met with no reply.

In the last century, many innocent people’s lives were lost—80 million (some say 60 million) under the rule of the Communist Party of China alone. During the Land Reform and Suppress the Counterrevolutionaries campaigns in the 1950s, many people were beaten to death or murdered; the Great Leap Forward from the late 1950s to the early 1960s (which was in fact the Great Famine) starved numerous people to death; from the 1960s to the 1970s, the nationwide and decade-long turmoil of the Cultural Revolution resulted in the suicide and murder of many people. And near the end of the century, the bloodshed of June 4, 1989 occurred, when the fully-armed field army entered Beijing to carry out the most gruesome massacre of students and other residents, spraying them with machine guns, and crushing their own compatriots with tanks. Exactly how many people died? The number has been tightly concealed to this day.

After the June Fourth bloodshed, we stood up from where our loved ones fell—one by one, we gathered group by group, and gradually we organized ourselves as the Tiananmen Mothers group. In the endless night of darkness, we struggled, lost, struggled, and lost again. Yet we have never stopped, never rested. We did not despair or become discouraged at each failure, did not retreat or disperse. Instead, we continued forward, attracting more and more of those who share the same fate to come to our group.

Two thousand fourteen marked the critical 25th anniversary of June Fourth, when the Tiananmen Mothers as a whole suffered a new level of strict surveillance and suppression. Originally, we had planned that beginning with the 10th anniversary of June Fourth, victims’ families in Beijing would hold a collective memorial ceremony every five years. We would bring our deceased family members’ photos, gather in one of our homes, offer flowers, burn incense and light candles, play solemn music, and sprinkle wine to mourn our loved ones, so as to express our sorrows and comfort our loved ones’ souls.

In 1999, the 10th anniversary of June Fourth, we carried out our memorial ceremony under the tight surveillance of plainclothes police.

In 2004, the 15th anniversary, despite the wrongful treatment during the “T-shirt Incident” [1] in March, we still carried out our memorial ceremony under the watch of plainclothes police.

In 2009, the 20th anniversary, apart from Ding Zilin and her husband, who were under house arrest and could not participate, other victims’ families all held the memorial ceremony despite interference.

In 2014, the 25th anniversary of June Fourth, we had originally decided to hold the memorial ceremony in one of our homes on May 16. However, from Tomb-sweeping Day in April to around June 10, the majority of the Tiananmen Mothers in Beijing were visited by officials from the Municipal Public Security Bureau, State Security Brigade, district police sub-stations, and neighborhood committees to “have a talk.” Watch stations were set up outside their homes. And they were followed and watched when they went out. Therefore, the scheduled ceremony had to be abandoned. Even our annual statement on June Fourth could not be issued. In worse cases, some of our members’ homes were searched: Beijing Municipal Public Security Bureau officials came to these members’ homes to have “talks” with them that lasted entire days, from morning until night, which ended only when they “voluntarily” surrendered all the documents stored on their personal computers. Ding Zilin and her husband were put under house arrest outside of Beijing from May 4 to June 5. They were, for the first time, not able to keep vigil with their son’s spirit (his ashes are kept in their Beijing home) on his birthday (June 2) and death anniversary (June 3), let alone hold a memorial ceremony at home.

Monitoring of the Tiananmen Mothers did not stop with the passing of the 25th anniversary of June Fourth. Instead, it has become an all-encompassing “new normal.” Previously, the authorities mainly tapped the landlines and mobile phones of some of our core members to keep track of our activities before taking actions. Since early this year, they went so far as installing a bugging device inside the homes of certain members of the Tiananmen Mothers. When members had discussions of matters we were all concerned about, they recorded our conversations—including the drafts of the documents we read out loud—and then intimidated them. The families of victims, filled with righteous anger, denounce such despicable practices

They killed our family members without any explanation; when we demand justice—there is none. There is only persecution and monitoring to shut our mouths, and this is getting worse and worse. 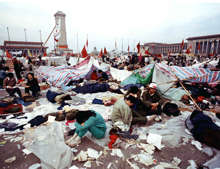 In March 2015, Premier Li Keqiang said at the Two Congresses’ press conference, “the leaders of a state not only inherit their predecessors’ successes, but should also bear historical responsibility for their predecessors’ crimes.” He was referring to the Japanese military imperialists’ war of aggression against China, and saying that today’s leaders of the Japanese government should bear historical responsibility for the catastrophe their predecessors created in China. By the same logic, shouldn’t today’s Chinese leaders bear responsibility for the series of crimes—manmade famine and slaughter—perpetrated in their own country by China’s leaders at the time: Mao Zedong and Deng Xiaoping? This is a certainty without a doubt and not easily changed. This is what “upholding a correct view of history, using history as a mirror [to look to the future]” means. The people will wait and see.

[The leaders] cannot impose a forced amnesia: remember whatever is beneficial to them and forget whatever is damaging to them. From June Fourth to now, each leadership [regime] in China has adopted selective forgetting about June Fourth. We have to unequivocally tell our leaders today that, relying on coerced selective forgetting can only succeed temporarily, and people’s silence cannot sustain over the long term. Debts must always be paid, and can neither be evaded nor reneged on.

Don’t forget what year this is—why people commemorate the 70th anniversary of the world’s victory against fascism, why we commemorate the 70th anniversary of China’s victory in the War of Resistance against Japan, why Taiwan commemorates the “228 ” suppression [of Taiwanese intellectuals], and why Korea commemorates the Gwangju Massacre each year. We ask: when, which day, which year will China also commemorate the tragic deaths of those innocents in the Land Reform and Suppress the Counterrevolutionaries campaigns, the ordinary people who starved to death during the Great Famine, the Chinese citizens tortured and persecuted to death during the ten years of the Cultural Revolution, and the victims of the June Fourth Massacre? People are all united in this belief and abide by this logic!

As suggested by members of victims’ families, the names of our deceased group members who have been signatories over the years are also listed below to honor their unfulfilled wish:

[1] In March 2004, Ding Zilin and two other members of the Tiananmen Mothers were detained and held for several days for attempting to bring into China T-shirts printed with the logo of “1989-2004: Tiananmen Mothers.”

* Translation by Human Rights in China.