In Support to Detained Chinese Feminists, Take Action on April 12! 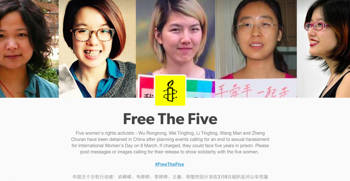 In response to An Urgent Calling for Global Action: Protest in Front of Chinese Embassies for Detained Chinese Feminists, we are going to launch a protest at the Mongkok pedestrian zone to demand the immediate release of the Chinese feminists.

On 21 March in Hong Kong, we launched a protest to the Liaison Office of the Central People’s Government in the HKSAR and submitted the 2500 signatures from individuals and 77 organizations, including women, sexuality and human rights NGOs, Trade Unions, local organizations, scholars, students and citizens from all over the world.

Until now, the detention of the five feminists (Wu Rongrong, Wei Tingting, Li Tingting, Wang Man and Zheng Churan) has surpassed the 30 day limit while no one has been released. According to their lawyer, the police has decided on sending their case to prosecutors for formal arrest. Until the 37th day since the detention, that is April 13 Monday (Beijing time) the Procuratorate will decide whether to prosecute them formally.

The whole world is watching. More than 100,000 people from more than 100 countries are asking for their release. Many NGOs, women’s rights groups and governments of the US, the UK, Canada and the EU representative have called for their release. Notable figures like Hilary Clinton and Samantha Power have also spoken out n their behalf. Important international media sources have been spreading the news.

We, as individual and concern groups for women, sexual minorities, gender equality, workers (etc.) human rights need to stay in solidarity with the five women activists. In order to give stronger voices to join hands coalition from all over the world to warn the Chinese authorities from persecuting women’s rights defenders. We also would like to send our kind regards and encouragement to the detained feminists in the Mainland.

This Sunday, we need you to show your stand and give your support to the detained women activists. 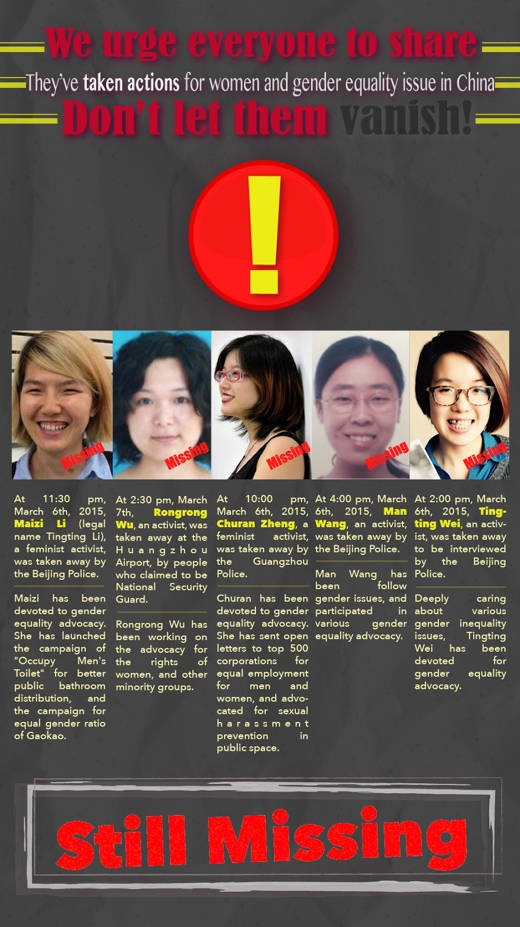