4 April 2015: a landmark in the search for the truth about the Greek debt 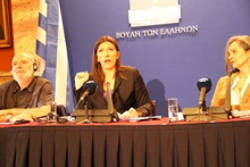 For the first time in Europe a committee for an audit of the debt (with citizens’ participation) was set up under the auspices of a parliament. On Saturday 4 April the president of the Hellenic parliament Zoe Konstantopoulou opened the first official session creating a debt audit committee , also called committee for the truth about the debt.

Zoe Konstantopoulou read the decree establishing the said committee consisting of Greek and foreign members and defined its essential mission, namely identifying what part of the Greek debt is illegal, illegitimate, odious or unsustainable, in other words establishing the truth about the Greek debt, providing their findings to the Hellenic parliament, the European parliament, to the national parliaments of the EU member States as well as to the Greek and international public opinion. Zoe K. recalled the suffering imposed on the Greek people by the creditors’ demands.

Next the President of the Republic, Prokopis Pavlopoulos, made a substantial speech supporting this major initiative. Prime Minister Alexis Tsipras and some ten other ministers were also present.

The President of the Hellenic parliament invited MEP Sofia Sakorafa to take the floor. She recounted the five year trial of all those who demand an audit of the debt so as to radically reduce it have been involved in.
Éric Toussaint, Scientific Coordinator of the international team within the committee summed up some of the questions for which the auditing committee will seek answers as it investigates the Greek debt.

Afterwards three members of the auditing committee took the floor, namely Cephas Lumina, former United Nations Independent Expert on the effects of foreign debt on the full enjoyment of all human rights; Margot Salomon, Director of the Centre for the Study of Human Rights at the London School of Economics, and Maria Lucia Fattorelli, former member of the committee auditing the debt of Ecuador and Coordinator of the Citizen Debt Audit-Brazil.

The whole session, that lasted from 2 p.m. to 7.45 p.m., was broadcast live on the Hellenic parliament television channel, which is steadily winning more viewers in the country.
The audit committee will continue its investigation on Sunday, Monday and Tuesday.
The Sunday session started with jurist Georges Kasamatis’ intervention. It was broadcast by the Hellenic parliament television channel: http://www.hellenicparliament.gr/Enimerosi/Vouli-Tileorasi/ https://parltv.live.grnet.gr/webtv/

The Committee will audit the Greek debt in the coming months, aimed at finding out whether part of the Greek public debt is illegitimate, illegal, odious or unsustainable.

Without claiming to be exhaustive, one can propose the following definitions:

Illegitimate public debt : debt that was contracted by a government without considering the public interest, a debt contracted in favour of a privileged minority.
Illegal debt : debt contracted in violation of the current legal or constitutional system.
Odious public debt : granted on conditions that violate fondamental human rights (the social, economic, cultural, civic, and political rights of the people).
Unsustainable public debt : debt that can only be paid back with dire consequences for the people such as a dramatic degradation of their living conditions, of access to health care or education, an increase in unemployment.

Paragraph 9 of Article 7 of Regulation No 472/2013 of the European Parliament and of the Council of 21 May 2013 (which strongly undermines the sovereignty of the member States that have to implement adjustment policies) maintains that States subject to structural adjustment should carry out a complete audit of public debt in order to explain why indebtedness increased so sharply and to identify any irregularities. Here is the text in full: “A Member State subject to a macroeconomic adjustment programme shall carry out a comprehensive audit of its public finances in order, inter alia, to assess the reasons that led to the building up of excessive levels of debt as well as to track any possible irregularity”. |1|

Citizen participation is fundamental to a rigorous and independent audit process.

Here are some key questions that could be tackled by auditing the Greek debt.

Greek debt was at 113% of GDP in 2009 before the onset of the Greek crisis and the intervention by the IMF and the European institutions involved in the Memorandum reached 175% of GDP in 2014. How could we explain that? Are there irregularities in the huge increase of the debt?

The audit will analyse the legality and legitimacy of the so-called bail-out process.

Is it in conformity with European treaties (especially Article 125 of the Treaty on the Functioning of the EU, which prohibits EU countries from taking on the financial engagements of another EU country)?

Did it comply with normal EU decision making procedure?

Did the public lenders in 2010 (the 14 EU countries that granted Greece €53 billion of loans, the IMF, the ECB, the European Commission etc.) respect the full consent of the borrower, Greece, or was Greece acting under coercion?

Did these creditors impose one-sided conditions such as excessive interest rates on the loans? |2|
Did the 14 EU member States that each granted Greece a bilateral loan respect their own laws and constitutions, as well as those of Greece?

Another purpose is to audit the actions of the IMF. We know that at the IMF Executive Board meeting of 9 May 2010 several members of the IMF Executive Board (the Brazilian, the Swiss, the Argentine, the Indian, the Chinese members) had expressed considerable reservations regarding the loan granted by the IMF, pointing out, among other things, that Greece would not be able to repay it due to the policies that were being imposed on the country |3| . See the revelations made by The Wall Street Journal: http://blogs.wsj.com/economics/2013/10/07/imf-document-excerpts-disagreements-revealed/ See also: http://greece.greekreporter.com/2013/10/08/secret-imf-report-shows-greek-bailout-worries/

Recently, Paulo Nogueira Batista, one of the IMF’s executive directors, claims that all IMF board members knew that the loan was actually intended to save the French and German banks not Greece. |4| the revelations made by The Wall Street Journal: http://blogs.wsj.com/economics/2013/10/07/imf-document-excerpts-disagreements-revealed/ See also: http://greece.greekreporter.com/2013/10/08/secret-imf-report-shows-greek-bailout-worries/

Philippe Legrain, advisor to the President of the European Commission José Manuel Barroso in 2010 when the Troika granted its loan, specifies that ‘IMF decision makers were overruled by the IMF Managing Director of the time, Dominique Strauss-Kahn, who was then running for the French presidency and consequently wanted to prevent French banks from facing losses. Similarly German banks had persuaded Angela Merkel that it would be terrible if ever they should lose money. So the Eurozone governments decided to pretend that Greece was only facing temporary problems.’ They had to bypass ‘an essential principle in the Maastricht Treaty, namely the no-bail out clause. The loans to Athens were not intended to save Greece but the French and German banks that had been foolish enough to grant loans to an insolvent State.’

Private European banks were thus replaced by the Troika as Greece’s main creditor as from late 2010.

Did the ECB has respected its mandate?

The audit must also evaluate whether the strict conditions imposed on Greece by the Troika in exchange for the loans it received has respected their international human rights obligations - such as the right to health care, to education, housing, social security, to a fair wage, and also freedom of association and collective bargaining.

The audit will need to verify whether, as provided for in Regulation (EU) No. 472/2013 of the European Parliament and the Council of 21 May, 2013, mentioned above, “The draft macroeconomic adjustment programme… fully observe[s] Article 152 TFEU and Article 28 of the Charter of Fundamental Rights of the European Union.” The audit must also verify whether the following passage of the Regulation is adhered to: “The budgetary consolidation efforts set out in the macroeconomic adjustment programme shall take into account the need to ensure sufficient means for fundamental policies, such as education and health care.” It must also be determined whether the following fundamental principle of the Regulation has been applied: “Article 9 of the Treaty on the Functioning of the European Union (TFEU) provides that, in defining and implementing its policies and activities, the Union is to take into account requirements linked to the promotion of a high level of employment, the guarantee of adequate social protection, the fight against social exclusion, and a high level of education, training and protection of human health.”

There are also 3 conditions proposed to define an odious debt

- lack of consent;
- lack of benefit to the population;
- awareness of the lenders.

Conclusions: The Committee will audit the Greek debt in the coming months, aimed at finding out whether part of the Greek public debt is illegitimate, illegal, odious or unsustainable.

|2| The interest rates imposed in 2010-201 were between 4% and 5.5%. In 2012 they were, after protests (including from the Irish government who was also asked to pay high interest in 2010), reduced to 1%. Lowering the rate was a tacit acknowledgement by the 14 States that the interest rates were too high.

|3| See the revelations made by The Wall Street Journal: http://blogs.wsj.com/economics/2013/10/07/imf-document-excerpts-disagreements-revealed/
See also:
http://greece.greekreporter.com/2013/10/08/secret-imf-report-shows-greek-bailout-worries/