Our time to act has come! 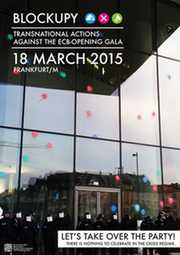 2015 began with something unheard of. The people in Greece stood up against all threats from Europe and elected a new left government. This, after 5 years of ruining the country of Greece, where the people lived in constant struggle against the humanitarian crisis and social destruction. A government was elected to stand up to the European institutions, rather than to accept more austerity measures imposed on its people. We support the decision by the Greek people to reject the neoliberal doctrine of "no alternative." We feel empowered and see the possibility of another future. Especially since this is connected to other important ongoing popular movements, like in Spain. Just recently in the streets of Madrid hundred thousands of people said out loud: We can and we will win again! Next, the people in Greece and all over Europe filled the squares on February 11th, the day the Eurogroup started renegotiating the Greek debt. A transnational wave of solidarity actions was unleashed.

This feeling of empowerment gives hope to millions of people in Europe and encourages the resistance against the crisis regime. Solidarity with the people in Greece and their democratic decisions is not only an obligation for us, but it is also in our common interest: the interest of all of us who all over Europe struggle against the logics of austerity and fight to improve their working and living conditions.

This is why we say: Our time to act has come! This is why we call everybody from all over Europe to join the transnational actions against the ECB’s opening on March 18th in Frankfurt!

It is true, the European crisis regime has changed over time – EU emergency meetings seem to have stopped, countries are leaving the Euro rescue fund. However, seeing the pressure put on Greece right now we have to realize that this does not mean the EU and ECB’s crisis policies are over. Blackmailing has not stopped – to the contrary. Whenever the European institutions are threatened, they react, they blackmail and don’t hesitate to bring back harsh austerity measures. Simultaneously we are facing something which almost feels normal now: a terrible new normality of precarity and poverty has become a reality through neoliberal policies that have been implemented during the crisis. These policies are safely embedded in state institutions and were never meant to be temporary. Austerity policies promote authoritarian governance, the further dismantling of democratic participation, the attack on working conditions, taking advantage of the hierarchies built on the borders regime. They are linked to the militarization of state and foreign policy, to growing racism and rightwing extremism. These last years with the infamous Troika and neoliberal governance have paved a way for a new phase in Europe: a precarious model of very limited social rights, a model of control and competition that we refuse to get used to!

We can and we will win again !

And we hear them now, the elites and governments crying out loud - with Germany in the forefront – against the demands of the people in Greece to stop and reverse privatization, demands for social rights and for taxing the rich, for not paying the debt and interest they did not cause. They fear the domino effect going through Europe; they are afraid that their “program” of competitiveness and neoliberal control enforced as the European model is going to crumble now.

One of the central agents of the blackmail and the normalization of austerity, of the stick and carrot, is the ECB. A crucial part of the infamous Troika (EU Commission, ECB and IMF), who along with the EU Council, promoted austerity and privatization, resulting in impoverishment and precarity of large parts of the populations in Europe. By demanding to not accept Greek bonds as collateral for central bank loans, the ECB enforces the continuation of austerity policy directly and is clearly taking side with the German government.

Blockupy therefore affirms its call for broad transnational actions against the ECB when it inaugurates its new headquarter in Frankfurt on March 18th. A tower 185 meters tall, resembling a fortress with its security fence and moat, a symbol of power costing a staggering 1,3 billion Euros. Our call for strong, broad, and lively European protests months ago has already left marks: the ECB announced that they are downsizing their grand gala into a coffee party. But we never cared about the numbers of guests. Our protest is the radical critique of its work – the planning, enforcement, the normalization of austerity measures.

We know that Frankfurt is the right place to be for all of us – the precarious, migrant and industry workers, socially active, emancipatory forces. Of course we know not even left governments can solve all the problems. The real dynamic starts on the streets and in the squares, the assemblies and associations, inside and outside the workplaces as a social dynamic. More than just demonstrating our solidarity with the people in Greece and their democratic decision, we will make clear that this is not a conflict of interest between the people in Europe. It is our struggle for all the people of Europe! The struggles in Greece and elsewhere have opened this path for all of us.

If not now, then when!? Louder and stronger than ever, we call for transnational actions on March 18th at the ECB in Frankfurt! March 18th is the right moment for all of us to be in Frankfurt. Now is the time to intensify all our efforts and to reach out to everybody to join the struggle. Now is the time to be the site for transnational struggle in and against the belly of the beast. Now is the right moment to hold the ECB accountable for its policies and to powerfully demand a different political direction. March 18th is our crucial chance as well as our responsibility to build a common, effective force from below – if they want capitalism without democracy, we say, we want democracy without capitalism.

On March 18 we will take the streets and the squares of Frankfurt, around the new ECB building and in the inner city with thousands of people from all over Europe. We will do that in the early morning around the ECB with actions of civil disobedience to stop the ECB from celebrating themselves and disrupt their normal work day. Everyone should and is welcome to join – they are activities designed for mass participation with a common consensus. We will then convene in a strong, diverse, lively rally and manifestation in the afternoon.

Join us in action! Join us for the blockades of the ECB at 7 am; at the rally at 2 pm and the demonstration through the inner city of Frankfurt at 5 pm

For more info go visit our website at http://blockupy.org/en/; the closer we get to March 18th, the more detailed info you will find – about the activities, bus coordination and accommodation, the program of the rally and the march and much more. If you have any questions tell us at international at blockupy-frankfurt.org or stay tuned via Twitter: @blockupy / #18M and facebook.com/blockupy.europe

Who we are: Blockupy is part of a European wide network of various social movement activists, altermondialists, migrants, jobless, precarious and industry workers, party members and unionists and many more from many different European countries from Italy, Spain, Greece, Belgium, the Netherlands, Denmark, France, Germany and other countries. Together we want to connect our struggles and powers beyond nation-state lines. Together we want to create a common European movement, united in diversity, which can break the rule of austerity and will start to build democracy and solidarity from below. Blockupy and the actions in Frankfurt are only one step along this path. As a transnational movement we oppose explicitly each and every attempt for racist, nationalist or antisemitic divisions as well as conspiracy theories to interpret the world.