“In general, those who have less eat worse” –

Of the class struggle and the things we eat 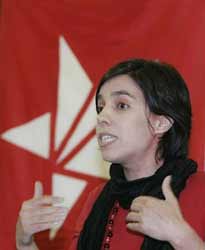 Do the rich and poor eat the same? Do our incomes determine our diet? Today, who is overweight? Although often, and from certain quarters, the call for healthy and wholesome food is viewed with disdain, as “a fad” “posh”, “hippy” or “flower power” the reality is rather different than these short-sighted comments imply. To defend ecological, local, peasant food is most “revolutionary”.

If we look closely we see how today’s agricultural model is determined by the interests of capital, by the interests of large companies (the agroindustrial sector and supermarkets), which seek to profit from something as essential as food. The capitalist system, in its race to transform needs into commodities, rights into privileges, making food, and especially food products of quality, into a luxury. Just as it has made housing only accessible to those who can afford it, and the same fate awaits our health and education systems.

Although it is not only the logic of capital that impacts on food, the invisible hand of patriarchy also pulling the strings of this system. If not how is it that those who produce the most food, women, are the most hungry? Do not forget that between 60% and 80% of food production in the South, according to the FAO, is in the hands of women, however you are, paradoxically, it is women who suffer most from hunger, 60% globally. Women work the land, but do not have access to land ownership, means of production or agricultural credit. This not about being ideological, but to make it clear to all who consider the idea of “eating well” is, as they say in France, a thing of the “bobos, the “bohemian bourgeois”, that nothing could be further from the reality.

If we answer the initial questions, the data confirms this. Do the rich and poor eat the same? No. Does our income determines our diet? Indeed. A study of Spain’s Platform of People Affected by Mortgages has put this in black and white: 45% of those who have been evicted have difficulty buying enough food to eat. Income puts limits on what we buy: it decreases consumption of beef and fish and in relation to the pre-crisis period, the consumption of fresh fruit and vegetables. In contrast, there’s been an increase in the purchase of less nutritious products, highly processed and high in calories, such as packaged sweets: cookies, chocolates, pastries and cakes. Our social class, education and purchasing power determines what we eat.

So, today, who is overweight? In general, those who have less eat worse. Looking at the map of the Spanish peninsula it is clear: the regions with the highest poverty rates, such as Andalucía, Canarias, Castilla-La Mancha and Extremadura, have the highest population that is overweight. In the US, people with higher obesity problems are African American and Latino communities. The crisis only accentuates the difference between food for the rich and food for the poor.

Questioning the dominant agricultural model and fighting for an alternative that places at its core people’s needs and respect for the land, is to get to the heart of the class struggle. The Agricultural Workers’ Union (Sindicato de Obreros del Campo, SOC) in Andalusia, led by Cañamero Diego and Juan Manuel Sánchez Gordillo, neither easily classifiable as “petty bourgeois”, are clear about it. Their work is to defend of a living countryside, land to the tiller, in favour of organic farming, for another model of consumption. This is a “fight” in defense of “nobodies”, the oppressed.

To fight for food that is local, healthy and campesino is the most subversive battle there is.

“Of the class struggle and the things we eat”: http://esthervivas.com/english/of-the-class-struggle-and-the-things-we-eat/