Hong-Kong : Occupy Central—What's Next for the Democracy Movement?

A Brief Observation on the Current Movement 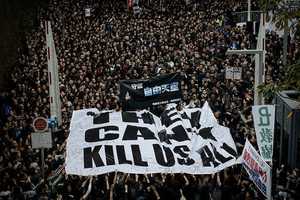 The general public has come out to support the students, and with their own bodies have resisted the tear gas to defeat the offensive of the regime of Leung Chun-ying, better known as C.Y. Leung, the Chief Executive of the Executive Council of Hong-Kong, sparking a new generation of people's democracy activists. This movement has the following characteristics:

1. The students and the public have shown that they have the ability to think for themselves, to take bottom-up direct action, without relying on the leaders. It is within a context where the movement displays deep distrust of not only the Pan-Democracy parties, but also of the Trio of three leading liberal academics and clergymen who suggested the occupation a year earlier. Even the Hong-Kong Federation of Students, which was for a while the vanguard of the movement, saw its proposal to withdraw on September 28 in view of escalation of crackdown was rejected by the masses.

2. The students and young people, whose actions have led to the upsurge in the movement, are now the driving force of the movement, rather than the middle-aged and middle-class Pan-Democracy supporters whom the Trio relied on as their constituency for their occupation plan, a fact which reflects the deep distrust towards young people and working people toward the Trio.

3. The Hong Kong Confederation of Trade Unions (HKCTU) has called for a workers' strike and there are some responses; in addition to this there is strong sympathy for the movement among working people. And the occupation of main streets also makes possible a slowdown in workplaces, which in turn allows lots of discussion among colleagues.

4. A desire for social equality has also become part of the movement. In his speech to the student boycott on September 22, student leader Alex Chow already mentioned the issue of economic inequality. A few days ago twenty-five trade unions and civil society groups also issued a joint statement not only demanding genuine universal suffrage but also regulations on working hours and a universal pension. The occupation of the last two days has also given the general public the chance to discuss their opinions, and amongst these one frequently hears discussions of the extreme inequality.

Because of this strong movement from below the C.Y. Leung government has now been forced to stop its offensive, permitting space for the movement to grow even larger. The issue now is how to take advantage of the situation fully and to seek the biggest victory. It means that we have to overcome the movement's weaknesses:

1. The old democracy movement's former leaders are no longer able to lead, however the new leaderships of the new democracy movement is still in formation. This is a danger. Although spontaneity has been a great factor in advancing the movement, now—with all the sabotage taking place and a crackdown quite possible sometime in the future by the Chinese Communist Party (CCP) and the Leung government—the movement will soon require more organising and leaderships, and I use plural here deliberately.

2. Although the students' organization is comparatively better, the general public lacks the organization and networks to support each other. This is especially so for the strike call. Although there were some early responses to the strike call, a broad strike wave has yet to happen. The HKCTU is not yet strong enough to fully implement the strike call, let alone to organize the solidarity alliance now in preparation. Strengthening movement will require great effort and also new initiatives
II. Aims and slogans

1. The Leung Chun-ying regime must surrender Civic Plaza and Tamar Garden to the people and to withdraw all police from there, so that these two places can be a focal point for the movement. If the government does not promise this then the movement should certainly not withdraw from the streets, and, if they do promise, then the decision to withdraw or stay on will depend on the circumstances and the wishes of the people.

2. The Leung Chun-ying regime and its officials must apologise.

3. The Leung Chun-ying regime must step down.

4. The National People's Congress (NPC) resolution must be withdrawn; genuine universal suffrage and civic nominations must be implemented.

5. Regulations on working hours, a universal pension and collective bargaining rights must be implemented.

6. We must win regime change and the self-determination over political reform.
III. The Way Forward

1. Working people need more encouragement to strike. One way is to encourage each company or unit to organise and set up a small group for solidarity with the movement and to establish a strike committee. Only with this foundation, is it possible to discuss the issue seriously.

Slogan: Students and workers unite together to achieve regime change. For self-determination over political reform!

3. Proposing self-determination over political reform is appropriate. However if anyone proposes Hong Kong independence then we (the democratic left/progressives) can respond that we cannot agree to this, although we respect the right to express this opinion. Also it is an issue worthy of discussion later, but not for now, or it may be harmful to the movement.

Updated on the early morning of 30th September

Last night when I went to the scene, I found that the movement had again expanded in scale and it was very moving. However this also increases the risk of direct intervention by the CCP—although this does not necessarily mean dispatching the Peoples Liberation Army (PLA) from the outset. Nevertheless it is necessary to avoid provocations and excesses. In the case of escalation of the crackdown from tear gas to shooting—or even worse the mobilization of the PLA—there is no way we can fight that, given the present level of organisation.Therefore we should retreat from the streets when this moment comes, but keep the strike going – no one can force working people to work normally even with guns. In addition to this we will need a deepening of the non-cooperative movement in all areas.

* An earlier version was translated by Bai Ruixue, but since then the Chinese version (http://www.inmediahk.net/node/1026604) had been revised and partially translated by the author.

* Au Loong Yu is a Hong Kong activist. He is currently editor of China Labor Net and also has a column in Inmedia.