Serbia: Faced to the neoliberal assault on working class rights, can the trade unions lead the struggle? 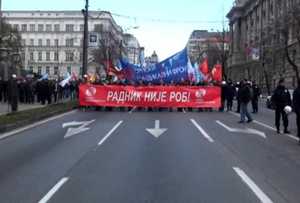 July 17th witnessed one of the largest social protests in Serbia since the beginning of the global financial crisis. Around 10000 people, mainly public sector workers, marched through the streets of Belgrade against the “economic reform legislative package” including the latest incarnation of the Labour law. This will, among other things, severely deregulate the labour market, making it even easier for “entrepreneurs” (as capital owners and managers are lovingly referred to by the government controlled media) to sack workers and cut wages and severance pay (thus legalising practices already commonplace in contemporary Serbia), which has, in one form or another, been on the agenda of all post-Milosević governments in Serbia.

The second half of last year saw a re-emergence of the government initiative to introduce the new Labour law. Guided by the experiences of the past when they were successful in beating back the suggested legislative changes, the trade unions went into a lukewarm, but decisive action against the law, which included a one day warning general strike that, according to the information supplied by the representative trade unions, included over a million workers. News of the government plan did nothing to reduce the number of strikes and protests which have been on the rise since the beginning of the crisis.

The Law was also the focal point of a successful mobilisation last December when an alliance of non-representative trade unions called the Serbian trade union front (Srpski sindikalni front – SSF), which included the only openly left-wing trade union with a significant membership in Serbia – Sloga, succeeded in organising demonstration that numbered several thousand and that resulted in the Law being pulled back to the drawing board, and the resignation of the then-Minister of economy, Saša Radulović, one of the most vocal proponents of neoliberal assault on working class in Serbia. Radulović stated that his resignation was due to the lack of serious political will to go through with the reforms.

Aleksandar Vučić, then de facto and now de iure prime minister of Serbia, who used the resignation of Radulović to paint a portrait of himself as a “realist” reformer who tries his best to moderate the impact of the austerity measures and to spread out the burden of the crisis, employed a similar tactic last week when the public was informed that Lazar Krstić, another non-partisan “expert” who served as Minister of Finance, announced his resignation, while saying that “Vučić has a heart that is too tender”, because he was opposed to further pension and wage cuts.

However, this time around, even though they were larger in numbers, and fronted by the representative trade unions, the mass demonstrations failed to put sufficient pressure on the Parliament, which ratified the Law less than 24 hours after the protest. This is most likely connected to the fact that last December the probability of early elections was high, and that Vučić decided to postpone forcing the EU-pleasing reform package until after his Progressive party secured the majority in the Parliament.

As the global financial crisis worsened and its effects became more and more severe in Serbia, the decisiveness of the Serbian government to force the poorest layers of the population to pay the price that the MMF demanded, by pushing through further privatisations and an even more neoliberal legislation, grew. In the weeks after it became obvious that the Labour Law will be ratified, all semblance of “socially responsible” rhetoric was abandoned by the government. This is probably at its most obvious in the statements of the Labour minister Aleksandar Vulin, whose facade of a left wing and pro-worker politician melted away to reveal a neoliberal death mask identical to that of his namesake and superior, Vučić.

On the other side, the heads of the trade union bureaucracies effectively thwarted any form of grass roots union organising, routinely refusing support to striking workers of any of the hundreds of Serbian firms destroyed by privatisation, and insisting in vain on the importance of the social dialogue with the representatives of the state and the employers. Faced with the ruthlessness of the government, last week, after waiting for as long as they possibly could, they took the gamble of calling for a general strike – a tactic that was last used over 10 years ago. It must be clear that any call for such action is likely a negotiation tactic aimed at getting the trade unions a seat in the economic council where their leaders could demand changes in the Labour law that would not conflict with the particular interests of certain sections of the membership of their unions, whose support and passiveness is key to their personal labour aristocracy positions.

This is evidenced by the initial response of the two representative trade unions to the news that the Law had been ratified – they did not call for a radicalisation and a prolongation of the general strike. Rather, they announced a referendum campaign against the Labour law. Ideally, the referendum could be a good central activity around which working class politics could be promoted, but the odds of it being used in such a way by the trade union bureaucracies are slim at best. Their hesitation to include the rank-and-file into the organisation of the struggle itself will cost them dearly, as the government will be sure to try to prevent the referendum from gaining momentum.

While the indecisiveness of the trade unions may not be attributed solely to the malevolence and treachery of their leadership, it is definitely due to the ossification and a complete lack of grassroots activity within them. In other words, it would be short-sighted, and slightly conspiracy theorist to state that the trade union leadership is frightened of releasing the spirit of mass mobilisation by demanding constant activity form their shop floor members, and, thus, is inclined towards a more formalist referendum strategy. The fact of the matter is that they lack the know-how, the political will, and the structural flexibility of conducting a reasonable and effective political action that would include a large number of trade union members.

I would conclude this article by stating that the only possible scenario in which such a mass action might become plausible would arise with the emergence of a new wide platform of the radical left that would include the most progressive elements of the Serbian society – the healthy sections of existing trade unions, the militant workers of the privatisation-ravaged companies, student organisations, minority rights groups, progressive NGOs, and revolutionary socialists. To that effect, yesterday’s demonstration presents a shimmer of hope as it bore witness to the first public intervention of the Left Summit of Serbia which was received extremely well by the protesting workers and the disgruntled public. Left Summit of Serbia represents a wide radical left network that tries to interconnect exactly the type of organisations mentioned around a set of political principles focused on worker and democratic control, reindustrialisation, antifascism, and the struggle for equality.

Further inspiration for left wing fighters in Serbia comes from the ex-Yugoslav Republic of Slovenia where a much more developed platform of a similar style successfully performed in the parliamentary elections securing 6 MPs, marking a turning point in the progressive politics on the Balkans and the beginning of the end of rampant anti-communism that marked the post-Yugoslav politics for the last 25 years.

The future of working class rights and human dignity in Serbia hangs by a thread. It is now up to the people who recognise the seriousness of the situation to organise and to try to formulate a coherent and an uncompromising alternative to the neoliberal assault of the EU and/or Russia backed government. The consolidation of the Left Summit of Serbia is a step in the right direction, but it must be followed by a series of other similar steps in quick succession should we hope to be in a position to counter ne neoliberal agenda of our politicians and tycoons before it’s loo late. The first of those steps might be the Left Summit of Serbia proving its organisational skills and mobilisation capabilities to the unionised workers of Serbia. The referendum around the Labour law, if it goes ahead, could be the focal point that allows the Left Summit of Serbia to bring socialist politics back on the agenda. The sooner the radical left politics begin disseminating within the rank-and-file of the trade unions, the lesser and more limited the opportunities for the labour aristocracy to betray working class interests and for the government to act with impunity while attacking those very interests. In Serbia, we have a new spring in our step.

* Also available in Serbian at http://marks21.info/

* Pavle Ilić is a graduate student of sociology in the University of Belgrade. He is a member of the revolutionary socialist group Marks21, and a supporter and activist in the Left Summit of Serbia.