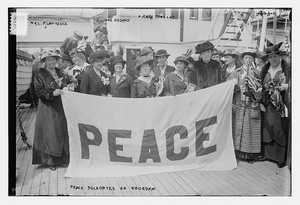 Women in Black of Madrid remember the Cassandras of the Great War:

Bertha von Suttner worked to avoid another war, any war. Her novel Lay Down Your Arms is an appeal for peace and describes the horrors of armed confrontation. She founded the Austrian Society for Peace in 1891 and worked tirelessly for the international pacifist movement. She denounced rearmament in peacetime, which would ruin the nations, and warned about the preparation of various countries for a great conflict. She confronted the virulent opposition of nationalists, the clergy and anti-Semites. The First World War began a month after her death. She was the first woman to receive the Nobel Peace Prize.

Rosa Luxemburg was arrested in February 1914 for inciting soldiers to rebel and declared: “If they expect us to assassinate the French or any other foreign brother, let’s tell them: ‘No, under no circumstance.’” A couple of weeks after the outbreak of the war, she declared her disappointment that the European workers’ movement had not avoided the catastrophe. She opposed the directives of the International Socialist Movement and thought that once the war came to an end, the “traitors” could be brought to justice. She was executed in January of 1919 by paramilitaries recently demobilized from the war front.

Clara Zetkin was a leader of the Social Democratic Party of Germany and organized the women’s section of the party. In her struggle against war, she sent out a call to the women socialists to energetically oppose an armed conflict, which would benefit only the clerical and profiteering patriarchal bourgeoisie, and convened an International Conference of Women Socialists that took place in Berne (Switzerland). At the conference, the imperialistic conflict was censured with the slogan “War on war”. On account of that, she was jailed and expelled from the party.

In the context of the First World War, two Women’s Pacifist Congresses took place in Europe in 1915: The Conference of International Socialist Women mentioned before and the International Congress of Women in The Hague under the leadership of the Dutch suffragist and pacifist Aleta Jacobs and Jane Addams (Nobel Peace Prize). Participating in this meeting were 1,136 women, although many of them were refused passports by their respective countries or were stopped at the border. Upon returning to their home countries, they were accused of “anti-patriotism” and many of them were arrested or closely watched by the police. The International League for Peace and Freedom (WILPF) was born at this Congress through important suffragists who defended the idea that peace and equal rights for women were closely related and, in the midst of the First World War, proclaimed that war was not inevitable. These symbolic and historic Congresses adopted resolutions that established the basis for an International Movement of Women for Peace.

The “International Congress of Women for understanding among nations” took place in 1917.

There were massive demonstrations by women and various actions against war in Berlin, as well as in cities of Austria, Russia and other countries. Pacifist women who lived in the warring countries were pursued, imprisoned and subjected to police surveillance. Hélène Brion, a French pacifist teacher, was accused of treason and denied her teaching position because of distributing pacifist pamphlets in 1918. During her trial, she declared: “I am an enemy of war because I am a feminist…Between war and feminism there is total contradiction.”

Women in Black of Madrid make manifest our recognition and support for all the Cassandras who currently are working for social demilitarization, human rights, solidarity and a world without wars.

We also pay homage to our companions of Women in Black who have passed on, Ana San Emeterio from Cantabria and Conchi Chaus from Valencia. Their commitment and solidarity will be with us always.

* Translation: Trisha Novak with the collaboration of Yolanda Rouiller.