Spanish State: What will Podemos do in the European Parliament

Teresa Rodriguez is a member of Izquierda Anticapitalista (IA), the section of the Fourth International in the Spanish State, who was number 2 on the radical left list Podemos which had five deputies elected at the European parliamentary elections of May 25, 2014. This interview was conducted by Francisco Artacho and is translated from the online periodical Andaluces Diario.

Francisco Artacho – How do you explain such a strong eruption of Podemos onto the Spanish political scene?

Teresa Rodriguez — This has probably to do with the need to consider alternatives which are not exactly those of the traditional parties, that are closed spaces, difficult to penetrate for citizens, subject to an identity-based framework, but at the same time in permanent conflict due to the policy of budget cuts and which have lost contact with reality inside governments of “possibility” and “continuity”. It is also due to the fact that we had put forward a coherent practice since the beginning, arguing that we must not depend on bank loans but, on the contrary, forge loyalties only with the victims of financial power. In fact to say that we are the majority, to propose the “deprofessionalization” of politics, the daily control of political representatives, the right to recall. The requirement that public representatives resemble, in their daily living conditions, those who they represent. We were able to build this candidacy by gathering 50,000 signatures in less than 48 hours, by organising open primaries with a record participation, a participatory programme and creating more than 300 popular and citizens’ circles. This was a very well used 4 months of existence and a very good campaign.

For the municipal elections of 2015, is a coalition with IU possible?

This, we should decide in the circles of participation, in the areas of decision making that we have built. It will be the circles that, in all cases, will need to determine what kinds of alliances will be made and in what form we will work from now on. We are arguing for a radical democracy in society, it would not therefore be acceptable to not put it into practice “at home”. From the beginning we decided that we did not want to negotiate the lists in offices. We want to open spaces of egalitarian participation with all those who are involved in the initiative, within each municipality. This will be the only space of decision making on everything: on the nominations, on the program and so on. We want to form a popular and citizens’ front which constitutes itself into a political majority in order to defend, with clarity, the interests of the majority, and not an arithmetic sum of acronyms. In all cases, I believe that it is necessary to be coherent, not to accept any budget cuts justified by an illegitimate debt that arises from the banking rescue and an unfair taxation, to defend the need to overthrow bipartisanship without coming to the rescue of any of its components. It is important to continue to maintain alliances, to try to form a broad front against austerity with other political forces and, of course, with Izquierda Unida.

What is the first initiative that Podemos will take in the European Parliament?

The initiative that we were already in the process of drafting is a proposal against corruption which is called the Villarejo directive [1]. It argues that corruption is a form of government and proposes the best way to break with the corruption and to vaccinate against it. And this vaccine is collective control. Among other issues, there are measures such as the limitation of the salaries of public representatives, the possibility of their revocation by the rank and file, the limitation of terms and so on. All of this, we are going to do ourselves, and we decided not to collect the 8,000 euros that is assigned by the European Parliament to each parliamentarian. In one way or another, it seems to us that the fact of having living conditions qualitatively different from those represented autonomises public representatives. In my particular case, I will continue to receive exactly the same salary as a teacher: 1 700 euros.

We have also begun to create alliances with other European forces which are in the process of considering the need not to pay the public debt, to disobey the obligation to repay the illegitimate debt. In addition, we also want to highlight the need to build European institutions completely different from those that exist. Because it is not possible to exercise any citizen control over the European institutions who really take the decisions. The European Commission is mainly composed of technocrats, it is here the decisions are taken which affect us on a daily basis, and it is entirely controlled by the financial authorities. We are also supporting proposals to democratize the European Central Bank, which is the obscurantist agency headed by technocrats over which we cannot exercise any kind of control, whereas it is in the process of managing the funds of all countries. 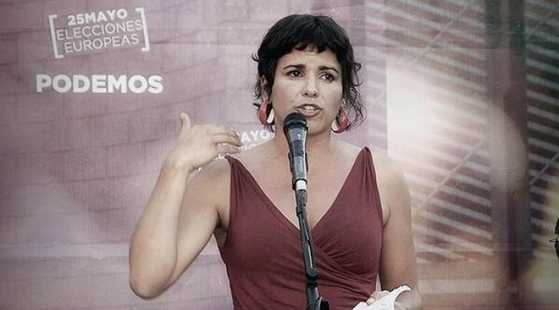 Do you think that we can change anything from the European Parliament, which has no decision- making power?

It is not from the European Parliament that we really will change things. What it brings to us is, in the first place, an opportunity to make a discourse audible and a different practical politics visible. This will have a bearing on the next elections at the state, regional and municipal levels. It also gives us the opportunity to launch proposals with other countries, because the path of disobedience faced with the Troika is difficult and we want to create links with other political forces, which are in the process of considering similar alternatives, in order to create a common front. And on the other hand, it is also a good space to denounce a political caste which escapes any citizen control and which deploys itself with total impunity, particularly in the European institutions.

Since Podemos, the term “political caste” is widespread, but now you have all the benefits enjoyed by a European parliamentarian. Do you fear becoming a part of the caste?

We have already injected a few vaccines to avoid being transformed, for example collecting a normal salary. We decided a maximum which is equivalent to three times the Spanish minimum wage. In a certain way, this will prevent us growing accustomed to institutional statuses. Also the limitation of mandates, because we believe that accumulating more than two offices professionalises public representation. We also have the possibility to revoke at any time any public representative of the initiative, and this in any institution. These are the commitments that all candidates have signed prior to standing for elections and to which we are already committed.

And what will you do with the surplus money which is due to you as salary?

We will have to decide collectively, because I consider that this money is not for us. I have plenty of ideas, among others, supporting the social struggles which, for seven years, are in the process of responding to the problems of citizens more than any institution has done: the fight against redundancies, expulsions, the cuts in the health system, education, social services and so on. This could be a good way to reinvest what the European Parliament assigned to each representative.

Do you see yourself taking flights in first class?

No, because we cannot take business flights, that is one of the commitments that we have made in writing. This is something rather symbolic, I do not make a fetish of not travelling first class in aircraft. But it is true that in a certain way, that is also a vaccine against the danger of becoming detached from the community that one purports to represent. A person must live like those they represent, collect more or less the same salary and travel as they do. No public representative of Podemos should change neighborhood, or means of transport, or change their conditions of life, because in a way, existence determines consciousness.

What accounts for the electoral success of Podemos? Some analyses attribute it to the continual presence of Pablo Iglesias on television.

It is actually due to visibility, in the means of mass communication, a certain speech of clear confrontation with what exists, with the policy of the Troika and with the aggressive measures which are in the process of being applied since the beginning of the crisis. This has to do with us, but it also has to do with the existence of a kind of “we can” moment. A time where the living conditions of people are hyper degraded, where the violence of social conditions is ever harsher, combined with a lack of confidence in professional politics and of its legitimacy. The “we can” moment was exactly that and the answer at the time was to create emergency programmatic measures to stop what is happening to us: non-payment of the illegitimate debt, an end to tax havens, the persecution of fraud and evasion, reform of the taxation system to make it progressive, intervention in strategic enterprises and so on. All this combined with a practice which vaccinates us against corruption and the autonomisation of public representatives, strengthens the mechanisms of collective control, strengthens participation in decision-making within organizations aiming to represent citizens.