« Jubilation when the end of the longest strike in South African history was announced » : Voices from the Platinum Belt Victory 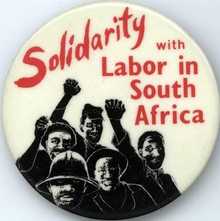 The stadium in Phokeng outside Rustenberg exploded in jubilation when the end of the longest strike in South African history was announced on June 23. Men and women waved their arms victoriously in the air and resounding ululations and cheering reverberated as a great burden of domestic hardship lifted. Workers had changed history. They had valiantly resisted the dogged state and corporate attempt to smash their strike despite the personal hardships that they had to endure to reach this point. It was they who dealt a blow to capital because it was they who held out determinedly and who accumulated five months of unpaid accounts, became black listed, kept their kids out of schools through necessity and went without food. They are indeed, the central heroes in this story.

“Five months is a long time to go without – but it is what you do when you want to change history,” says Andile [1], a community leader. “We had told ourselves that we will not give up – that united we are going to break this economic hold over us, and we did.” He thrusts his fist into the air defiantly.

Outside of the stadium a group of women are dancing and singing under a tree. Their ecstasy is palpable as hips are flung around joyously. We approach them and they gather around us all talking at once. We single out Nomzi Jikane whom we interviewed a week earlier in the long queues waiting for food parcels from Gift of the Givers. She is breathless and excited, but when we ask her what this means for her she lets out a long and exhausted sigh. 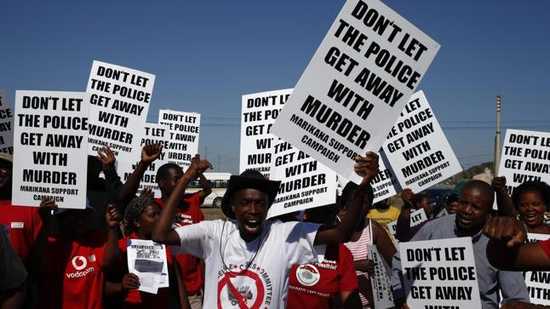 “The stress levels have been so high here,” says Jikane. “It is us women who have suffered, watching our children starve…but we supported our husbands’ choice to stay in this strike. And we were not starving because of the strike – we were starving when they were employed also. How do we work for nothing with nothing to show that we are employed ? We only ’survive’ on the money he is paid – we do not live. And we know that the government owns these mines too. Ramaphosa is a mine boss. But today we are showing them who is the boss...and it is us.”

The women ululate at this suggestion.

A round of ‘Ehes’ and the women begin to sing again.

“Their song is about what a liar Zuma is and the greed of foreign bosses…and also telling their husbands to use the money wisely,” Andile tells us.

We have gotten to know Andile over the weeks we have been here filming interviews with striking miners and have also been to his home – a tin shack in a settlement close to Lonmin. There are no taps, toilets or brick structures in his village – just shanties. Before the miners go off to work they have to get rid of their morning shit first by throwing it in a hole and burying it. Their small children have to fetch water late at night from a single tap across a road so that they can cook and wash the next day. It is a difficult and sparse existence. Wives spend a lot of time collecting firewood to cook with, as there is no power in the area. When someone gets really ill, ambulances cannot enter their village as the roads are bad and the sick person has to be carried to a point where the ambulances can reach – as happened one night in 2012 when we were there whilst it was raining.

Andile is radiating with happiness, so our next question to him feels like a killjoy. We ask how he is going to get back on his feet after not earning for so long.

“Eish – I am behind on everything. My accounts, school fees, loans. It will take me a long time to come right you know. We will continue to eat small, small meals and just get through this.”

He is a rock drill operator so his salary goes up by R1000, which is a 20% increase, the highest increase ever achieved. In the following two years his salary will go up by another 10% per annum, bringing his wages to almost R10 000.00 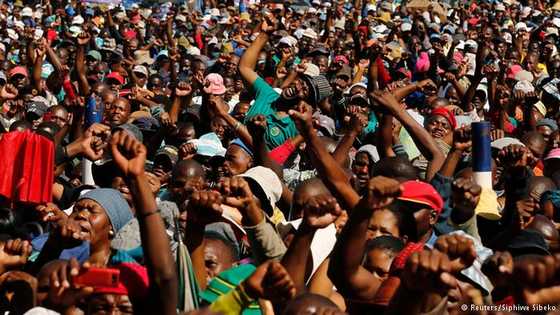 However, this is still a very low wage to earn when one considers that an Australian mineworker with no Matric can earn as much as R2.2 million per annum with lots of leave and benefits, according to Bench Marks researcher David Van Wyk.

Mineworkers are sharply aware of the discrepancies between their salaries and those earned by overseas miners. They are even more aware of the massive difference between what they earn and what the top executives earn – telling us it is about R23 million. This is apparently approximately what the Chief Executive of Lonmin, Bennetor Magara, earned in 2013 in salaries, shares and bonuses.

“These people, our people do not want to work with us anymore,” says Andile.

“They have become capitalist mlungus (whites)…that is what they are. They are the ones who are exploiting us so that they can keep their profits. Yes, we know about the white CEO’s, and we expect that from them because whites treated us like that always. It is hard for us to think of another Black man as the enemy to us, but that is what they are. They shot and killed us to protect their profits. It is them we are fighting…them and their profits. They want to keep us like the white man kept us – as his dogs, cheap labour - and we are saying no. We will not be their dogs. We want to earn a salary for our children’s houses too. Look at me. No house here and a mud hut at home, while his (Zuma’s) children go to the best schools and have big houses. That is fine, but we want enough money to build houses too. But look now, today we have changed that and now change will happen. United we will never be defeated. But it is not exactly what we wanted, so the fight is not over…We still live like poor dogs.”

And with that Andile has hit the nail on the head, as things will never be the same on the platinum belt again. Neither in South Africa, as this historic moment has intrinsically shown that workers united can and will effect change and amend history.

With mineworkers pitted against mine bosses, media and the state they have struck the most victorious blow against capital and this has the vast potential to systemically alter both the mining industry and big business in this country.

What we must not forget is that many of the mineworkers are still earning way below the R12 500 mark. They still live in poverty without services and infrastructural support. Their salaries and benefits are nowhere near comparable to overseas miners, though it is foreign investors that own the companies here. They are still living on the edge of the breadline though employed by mega wealthy corporations with strong BEE investments.

It is though a resounding victory that has struck fear into the guts of the mine bosses, their BEE partners and the state, as it signifies the potential for widespread change which could have a domino effect in the wider working class struggle and wage relations in the near future.

[1] Andile is not the real name of this interviewee who is under investigation by the police since 2012 and asked to conceal his identity.

All of SACSIS’ originally produced articles, videos, podcasts and transcripts are licensed under a Creative Commons license.

* Schutte and Singiswa are filmmakers and social justice activists who work at Media for Justice.