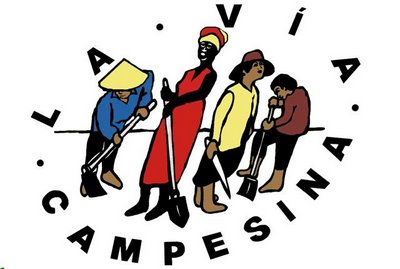 (Harare, June 2014) La Vía Campesina defines participation in the International Year of Family Farming, propelled by the UN in 2014, as the creation of a space for discussion and collective action to to push Food Sovereignty that has peasants and small farmers as a basis. All throughout the world they continue to grow and distribute healthy, self-produced food in their towns, in stark contrast to the commercial food industry, whose priorities are profit and speculation and whose strategy is to make agriculture increasingly dependent on agro-toxics, increasing their profits through the sale of herbicides, whilst damaging and contaminating natural resources.

We have witnessed a profound food crisis, which has brought attention to peasant based food production and the eradication of hunger within the UN's agenda. The UN has recognised the crucial role that male and female peasants play in this arduous task.

During the International Year of Family Farming, La Vía Campesina looks to offer political proposals within the framework of Food Sovereignty, constructed by small farmers. The term 'family farming' is vast, and may include almost any agricultural model or method whose direct beneficiaries are not corporations or investors. It includes both small-scale and large-scale producers (with farms covering thousands of hectares), as well as small-scale producers who are entirely dependent on the private sector, through contract farming or other forms of economic exploitation, promoted though concepts such as "The value chain". This is why La Vía Campesina defends family farming in terms of peasant based ecological Farming, as opposed to the large-scale, industrial, toxic farming of agribusinesses, which expel peasants and small farmers and grab the world's lands.

It is imperative, during this International Year of Family Farming, that critical steps be taken and that commitment be mobilised so that policies to protect and to strengthen peasant family farming might be implemented. La Vía Campesina supports a model of food production which promotes Food Sovereignty. This includes:

Access and control over productive resources such as land, water, seeds and finance. It is important to highlight, in this space for discussion, the urgent need for Integral Agrarian Reform: the democratisation of land, and the creation of direct employment, housing and food production. We consider that the concept of integral agrarian reform should not be limited to just the redistribution of land. We support an Integral Agrarian Reform which offers full rights over lands, which recognises the legal rights of indigenous populations over their territories, which guarantees fishing communities access to and control over fisheries and ecosystems, and which recognises the right of access to and control over livestock migration routes and pastures;
The recognition that female peasants and female agricultural workers have the same rights as their male counterparts;
The prioritisation of local food systems and markets;
The recognition of rights and protection against corporation-led production, and the large-scale production of agro-fuel;
The use of ecological production methods.

During this UN International Year, as La Vía Campesina, we contemplate certain threats such as the criminalisation, the judicialisation and the continuous repression under which male and female peasants live, not just at the hands of their states, but also at those of the transnational corporations. Conflicts over land and other natural resources exist throughout the world.

Of the national governments, we therefore demand: an end to land grabbing, and that of water and seeds; that they promote policies which guarantee Food Sovereignty, biodiversity and peasants' seeds, and that they improve access to land and water; that they recognise peasant rights regarding the production, reproduction and exchange of their traditional seeds, guarantees of agro-biodiversity and peasants' autonomy; and that they increase the support and public investments for peasant based production, and guarantee markets and equitable trade.
At international level, we urge governments to apply the Guidelines on Responsible Governance of Tenure of Land, Fisheries and Forests, and other key decisions from the Committee on World Food Security (CFS), and that they adopt the UN Declaration of Peasants' Rights. Additionally, we urge that they implement the International Treaty on Plant Genetic Resources for Food and Agriculture, and that they end negotiations for any new commercial agreements, particularly the TTIP (Trans-Atlantic Trade and Investment Partnership) or the TPP (Trans-Pacific Partnership).

In La Vía Campesina, we believe that we have to use this year to redirect agriculture towards a model of Food Sovereignty which will generate employment, provide healthy food, and respect natural resources. We call for the creation of an alliance between countryside and city, that it might revive the peasants' dignity and highlight their great contribution to food production; we need important political changes, both for our tables and for our fields.

In order to feed Humanity, small farmers reclaim their rights!

(Geneva, 18 June 2014) From June 11th to the 13th, a delegation of La Via Campesina partook in the 26th session of the United Nations Human Rights Council in Geneva in order to pursue its advocacy for the drafting of an International Declaration on the Rights of peasants and people working in rural areas.

Background
This declaration stems from the international peasant movement called La Via Campesina which has been working on the stated project for over a decade. La Via Campesina, a movement composed of more than 160 peasants' organisations across 70 countries, assumes the task of identifying the various discriminations faced by people working in rural areas (farmers, rural workers, nomads, fisher(wo)men, indigenous and landless peoples, etc.) and to determine - with the support of organisations such as FIAN International and CETIM (Centre Europe – Tiers Monde) – the inherent rights attached to this group of people.

After several studies undertaken by the Consultative Committee of the United Nations Human Rights Council, the Assembly (termed 'Council') accepted the final report in March 2012. In September 2012, it voted in favour of the resolution aiming at establishing an open intergovernmental working group in charge of drafting a declaration grounded on the project attached in the final report. In July 2013, this working group held its first working session.

Following the 26th Human Rights Council meeting, the member states will vote on a resolution calling for the renewal of the intergovernmental group's mandate in order to further pursue the drafting of this declaration, on the basis of recommendations that will emerge out of the first working group meeting and from the consultative ones expected to be held between June and November 2014.

Intense advocacy
La Via Campesina places great emphasis on the pursuit of this line of work, which is why it sent three farmer's leaders to participate in the aforementioned session: Ibrahim Coulibaly (CNOP – Mali), Geneviève Savigny (Confédération Paysanne – France) and Diego Monton (Cloc – Argentina). They all participated in a "parallel event" organised by the Bolivian and Filipino Ambassadresses on the topic of "Farmers' Rights and International Year of Family Farming". The panel was complemented by a video message by Mr. José Graziano da Silva, F.A.O. Director, and Mr. Christophe Golay from the Geneva Academy of International Humanitarian Law and Human Rights.

The Via Campesina delegation also participated in an open conference in Geneva and encountered several other African, European and Latin-American delegations.

Europe in line of sight
Starting from June 16th, this delegation will be replaced by a strong delegation from the Eurocpean Coordination Via Campesina representing France, Belgium, Portugal, Spain, Italy, Germany and Switzerland. The farmer's organisations from the European region have since 2 to 3 months' time worked on a plea addressed to their respective governments, calling for their support in favour of the resolution which will be discussed and up for vote during the upcoming session. As a matter of fact, the European countries have been the most proactive in this matter to date. Hence yet another symbolic action will take place on the Place de la Nation on June 17th at 11.30am when the European peasant's leaders will meet the European delegations from the Human Rights Council.