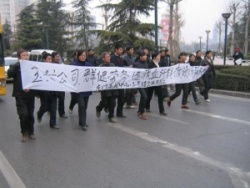 Green Left Weekly’s Peter Boyle spoke to Kevin Lin, who is doing research for his PhD at the University of Technology Sydney on the labour movement in China, about the background to a new wave of strikes in the country.

Peter Boyle – There seems to be a new labour upsurge in China. What can you tell us about the recent strikes and their causes?

Kevin Lin – Tracking strikes in China is difficult because of censorship, but there does appear to be an upsurge in strikes in recent months based on reports collected by labour groups.

The most recent strike, one of the largest in China in many years, is taking place at a Taiwanese-owned factory complex, Yue Yuen, in the city of Dongguan. The city is a manufacturing hub in the southern province of Guangdong.

Since April 14, more than 40,000 workers have been on strike over the company’s underpayment of workers’ social insurance. The striking workers held out remarkably well against police intimidation. They inspired a solidarity strike at another factory owned by the same company.

The strike gained a great deal of international media coverage because of its scale and duration, as well as its impact on global brands like Nike and Adidas, which the company supplies.

Most recent reports suggest that workers are returning to work after the company accepted much of workers’ demands. The success of this strike would surely inspire future actions by workers elsewhere.

There have been a number of other strikes just in the last couple of months. On April 20, thousands of bus drivers in Shenzhen staged a street protest over wages and working hours. On April 21, about 1000 workers in a state-owned electric motor company in Beijing went on strike over redundancy and inadequate compensation following the announcement of a factory relocation.

On April 21, about 100 sanitation workers in Foshan, Guangdong, gathered outside government buildings to protest high labour intensity and demand higher wages. And starting from April 8, about 1000 teachers from a county in Henan province have been protesting against low wages. They were joined by about another 1000 teachers from a neighbouring county in a mass protest on April 15.

In March, about 1000 taxi drivers in Yixing, Jiangsu, province staged a strike to protest against the company raising the fees charged. Also in March, workers at a Walmart store in Chengde, Sichuan province, picketed their store for two weeks after a decision to close the store was announced.

These are just a selection of the strikes and protests happening all over China. One recent report on workers’ movements by the China Labour Bulletin recorded 1171 strikes between mid-2011 and the end of 2013, likely to be a fraction of the actual number.

Most of these take place in the manufacturing, transportation and service sectors in private and state-owned companies.

Among the main causes of these actions are low wages and factory closures and relocations, which have been exacerbated by the slowing economy. The most frequent demands workers make are adequate compensation, wage rises and payment of wage arrears.

These strikes reflect workers’ growing awareness of their legal rights and confidence to take collective actions over the years. Their actions usually succeed.

Recent figures show a growing gap between labour and profit share of national income. Is this part of the explanation?

Nevertheless, wages have kept growing due to demographic changes, workers’ collective actions and regular rises in minimum wages. However, the wage share of national income has been in decline since the start of China’s economic reforms in the 1980s.

Both low wages for vast number of workers and extreme income inequality are among the main causes of labour and social conflicts in China.

What about the slower rate of economic growth? How significant is this?

It is very significant. China’s export sector took a hit in 2008 and 2009, leading to the closure of tens of thousands of factories and the temporary unemployment of more than 20 million rural migrant workers. The annual growth rate has slowed from the high point of 14% in 2007 to the current level of 7%-8%.

Companies are less willing to provide better wages and conditions. The slowing economy coupled with rising wages have led some companies to either close down or relocate to other developing countries to take advantage of even cheaper labour.

For now, the Chinese economy is still able to provide enough employment and modest wage growth to the hundreds of millions of Chinese workers. But economic downturns would certainly seriously impact on the livelihood of a large number of Chinese workers for whom there is very little social safety net.

Has there been any change in the Chinese authorities’ approach to these labour actions?

Yes, the government has increasingly tried to avoid confrontation with striking workers. Of course, the exact response of local authorities varies from case to case, and heavy-handed police actions and clashes still happen.

But the government has realised that suppression of collective actions could easily lead to escalation. Protests are so frequent that it is simply unrealistic to suppress all of them.

It is much less politically costly for the government to extract concessions from management on workers’ behalf and negotiate an end to strikes. The government has come to recognise the legitimacy of workers’ economic demands, but obstructs bids by workers to democratise trade unions. Protest leaders are sometimes selectively targeted. So workers trying to act collectively still face a lot of challenges.

Is the issue of environmental damage a major labour concern today? Is the labour movement taking action on such issues?

The environment has paid an unimaginable price for China’s economic growth. By the government’s own recent admission, one fifth of China’s farmland and more than half the groundwater is polluted. China has also surpassed the United States to become the largest carbon emitter, posing a serious challenge to the globe.

But there is not yet coordinated action by the labour movement, even though undoubtedly individual workers are concerned and do take part in these actions.

China’s labour movement remains localised and scattered. The political space for labour groups to emerge remains tightly controlled. It is enigmatic that the largest working class in the world ― with arguably the highest number of strike actions ― does not yet have its own independent labour organisation.

Chinese workers have not yet been able to organise on a broader basis beyond some successful coordinated industrial actions. In the years to come, whether they could collectively express their concerns over the environment will be crucial to solving China’s environmental crisis.