General Election in India : Narendra Modi and the BJP bludgeoned their way to election victory 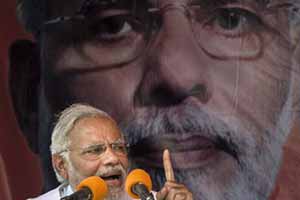 Narendra Modi and the BJP bludgeoned their way to election victory The sheer aggression of the BJP campaign, the threats to the Election Commission – Modi made sure India felt his presence.

This general election in India was almost a test case : just as advertising can make people want a particular brand of soft drink or breakfast cereal, can a massively funded and aggressive media campaign make people choose a particular leader ? The answer, sadly, seems to be yes.

It is hard to speak of « one » Indian electorate – there is so much variation across each state – but both local and national issues have always been significant. The BJP's campaign this time was different, seeking to present one man as the national leader and creating an unprecedented media blitz around him for nearly a year, so that voters simply got used to the idea and even started believing the hype, through sheer repetition of the images and slogans.

We do not have data on the amount of money that was spent on the Narendra Modi campaign, and unfortunately there is no limit on the spending by political parties as opposed to individual candidates. But estimates are in excess of Rs 5,000 crore (about £500m). This was possible because some large corporate entities threw their full weight behind Modi, seeing in him a strong leader who would deliver all the benefits and incentives they have got used to. And their investment in him seems to have paid off for now, as the clear majority achieved by his party alone, not to mention the strong showing by National Democratic Alliance allies, seems to have given Modi a free hand to do whatever he wants at a national level.

This huge mandate does provide so-called political stability, but it is at the same time a concern for Indian democracy for several reasons. The underlying association with the rightwing organisation Rashtriya Swayamsevak Sangh, which pulls many of the strings in the BJP, has always been an issue, but now the personality cult around an authoritarian leader may be an even bigger problem.

Until relatively recently, Modi was widely seen as a polarising and distrusted figure, even within his own party. His role in the pogrom against Muslims in Gujarat may not yet have been punished by the Indian courts (and now looks like it will never be,) but his culpability in terms of presiding as chief minister over the state in which they occurred and not punishing the guilty is still evident.

The « communal peace » that has supposedly prevailed in Gujarat since then has been achieved at a tremendous cost to the minorities, essentially by terrorising them into submission. Muslim families and individuals are increasingly ghettoised, finding it impossible to buy or rent accommodation in dominantly Hindu areas. Muslim youths are not only discriminated in employment but much more exposed to being picked up, interrogated and even imprisoned on mere suspicion of being terrorists. Bank loans are hard to come by for people from minorities, and intercommunity social mingling, particularly between young men and women, is frowned upon.

That this « peace of the graveyard » may be extended across India is a frightening prospect. Already during the election campaign the signs of things to come were evident. In the early stages of the campaign, the focus was more on the defects of the current United Progressive Alliance government and the supposed material progress of Gujarat under Modi, however illusory such progress may have been for most of its citizens. The attempt was to show him not as divisive, but decisive.

In the later stages of campaigning the gloves were off, and an increasingly strident BJP exposed their true attitudes. In a speech in West Bengal, Modi declared that only Hindu migrants from Bangladesh were welcome ; the others would be repatriated. His henchmen declared in Uttar Pradesh that anyone who did not support Modi should go back to Pakistan, where they belonged. That all this belligerence only seems to have helped them at the polls is alarming.

Modi even took on the Election Commission, threatening them with dire consequences for preventing his rally in Varanasi. And this raises another major concern : that such bullying tactics can succeed. Far too many of India's democratic institutions are weak and even those holding constitutional positions can often be bribed or cowered into subservience. The increasingly corporatised media has displayed its supine character already, avoiding asking the BJP candidate difficult questions or pointing to some of the clear dishonesty in the claims made about his success in Gujarat.

The BJP's economic programme for India has thus far been short of specifics. But if the experience of Modi's rule in Gujarat is anything to go by, it will involve crony capitalism that promotes and incentivises big business through all sorts of explicit and implicit subsidies, keeping wages low and suppressing any workers' action, repression of popular movements and cracking down on dissent. The human costs of this kind of growth are enormous, as are the human costs of achieving communal « peace » through fear.

Corporate India and Hindu majoritarianism have won this particular round. But can they also reshape Indian politics, economy and society in this unpleasant image ?