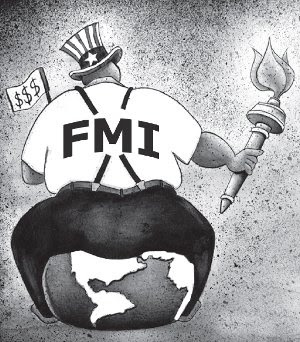 As the International Monetary Fund (IMF) prepares for its Spring meetings, new research reveals that the number of conditions it attaches to its loans are rising – and they continue to be linked to harsh austerity measures and interfere in sensitive policy areas. Conditionally Yours: An analysis of the policy conditions attached to IMF loans is the latest in a series of reports on the IMF’s lending practices produced by the European Network on Debt and Development (Eurodad) over the past decade.

IMF loans come with conditions which are often highly controversial, for example influencing taxes and cutting spending; freezing or reducing public sector wages; and mandating cutbacks in welfare programmes, including pensions. There are also conditions on the restructuring and privatisation of public enterprises, and conditions that reduce minimum wage levels.

Almost all the countries were repeat borrowers from the IMF, suggesting that it is propping up governments with unsustainable debt levels, not lending for a temporary balance of payments problems – its true mandate. Developing countries have a limited voice and minority vote at the IMF, and so these developments are especially worrying for them.

The Ukraine is the latest country to have been in negotiations with the IMF, with conditions attached to their proposed loan reported to include a cut in energy subsidies for consumers and a rise in gas prices by 50 per cent.

Jesse Griffiths, co-author of the report and director of Eurodad, said: “It is clear that the IMF needs a major overhaul. It should stop using its power to interfere in highly sensitive and controversial economic reforms, and recognise that its current model often makes debt situations far worse. We recommend that the IMF focuses on its true mandate of providing emergency funding without harmful conditions, and that more permanent and just solutions are found for countries devastated by debt crises.”

The IMF should focus on its true mandate as a lender of last resort to countries that are facing temporary balance of payments crises. Such countries need rapid support to shore up their public finances, not lengthy programmes that require major policy changes. A far more sensible approach would be to extend the example of the IMF’s new but little used Flexible Credit Line to all IMF facilities – requiring no conditionality other than the repayment of the loans on the terms agreed.
If countries are genuinely facing protracted and serious debt problems, then IMF lending only makes the situation worse. The development of fair and transparent debt work-out procedures should be prioritised by the international community, and at regional and national levels, to assess and cancel unpayable and illegitimate debt. However, the IMF should not be the venue for such debt work-out mechanisms: as a major creditor, they would face an impossible conflict of interest.
The IMF must urgently address its crisis of legitimacy, and radically overhaul its governance structure to give developing countries a fair voice and vote, and to radically improve transparency and accountability. A vital first step would be to introduce double majority voting, so that approval is needed from a majority of IMF member countries, in addition to a majority of IMF voting shares.
To read the full report go to http://eurodad.org/ conditionally yours. To read the full press release, click here.