Open Letter of support for Citizens of Bosnia-Herzegovina 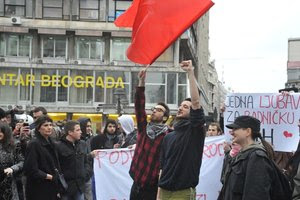 We, the undersigned, express our full support for the legitimate demands and justified outrage of citizens of Bosnia-Herzegovina. Their cry for a decent life, true democracy, solidarity that knows no borders—be them ethnic, national or religious, social equality and justice—resonates throughout the world. In a similar fashion to the citizens of Tahrir, Zuccotti Park, Taksim or Syntagma, the Bosnian protestors showed a courage to go beyond all institutional obstacles and all limitations that governments around the world impose on their citizens and reclaimed their streets and squares. The people of Bosnia-Herzegovina are standing against the system of exploitation, injustice and inequality that has been serving only and exclusively a tiny political, economic and financial elite.

One hundred years after the assassination of Franz Ferdinand when imperialist European leaders pushed their nations into a mutual destruction, Bosnia is sending a strong wake-up call to everyone. The world we live in is a world of divisions, expanding fascism, growing political and social apartheid, unrelenting capitalist destruction of both nature and common wealth of all. The citizens of Bosnia-Herzegovina have been experiencing all of that on an everyday level over the past 20 years. After the nationalist war between 1992 and 1995, in which 100,000 people lost their lives, the institutional peace settlement restored the capitalist system, destroyed the working and middle classes, and entrenched not only ethnic but also social divisions that have been successfully exploited by political elites. They said ‘enough’ and we say ‘enough’ with them.

We voice our support for their legitimate efforts to create a just and equal society in Bosnia-Herzegovina. We call upon all progressive political and social forces to stand with the people of Bosnia-Herzegovina in this decisive struggle for a better future of us all.