Philippines debt must be cancelled to support typhoon recovery work 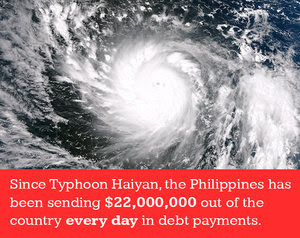 The enormous financial burden the Philippines labours under in servicing international debt while struggling to recover from Typhoon Haiyan and prepare for future emergencies must be lifted, said Christian Aid today.

It joins with the Jubilee Debt Campaign (UK), the Freedom from Debt Coalition (the Philippines) and Jubilee South (Asia Pacific Movement on Debt and Development) in calling for the cancellation of the Philippines debt – at present standing at about $60bn. |1|

More than $20 million a day - $8 billion a year – leaves the Philippines as interest payments to international lenders. Since Typhoon Haiyan struck a month ago, killing more than 5,000 people and damaging or destroying more than a million homes, over $550 million (£335 million) has gone on debt repayment. |2|

The debt largely originated during the days of the Marcos regime when western governments and institutions, such as the World Bank, supported the dictator with loans to keep him on side during the Cold War.

Lending totalled around $115 billion. Interest charges have meant that while some $132 billion has been repaid, another $60 billion remains outstanding. |3| The government says debt servicing accounts for some 20 per cent of revenue a year. |4|

Following Typhoon Haiyan, the World Bank and Asian Development Bank both announced loans totalling $1 billion to help with rebuilding, but this will further increase the country’s debt at a time when the UN Food and Agriculture Organisation is reporting losses of $261 million to agriculture and related infrastructure alone. |5| Estimates of the cost of rebuilding range between $6.5 billion and $15 billion.

Joseph Stead, Senior Economic Justice Adviser at Christian Aid, said: ‘The Philippines is prone to natural disasters such as typhoons and earthquakes. Debts that should have been cancelled years ago are limiting the country’s capacity to respond and prepare for future emergencies. Action on this is clearly needed before any new debts are added.’

Sarah-Jayne Clifton, Director of Jubilee Debt Campaign, said: ‘The Philippines urgently needs funding for relief and reconstruction efforts, as well as to adapt to the unavoidable impacts of climate change and support communities who live in areas that are beyond adaptation. International lenders should put life before debt and cancel the Philippines’ foreign debt obligations as a matter of urgency.’

Ricardo Reyes, Freedom from Debt Coalition President, said: ‘Justice for the Filipino people demands debt cancellation, especially the illegitimate debts, which are odious, onerous, illegal, violate human rights, harmful to the people, environment and climate, and bereft of institutional processes and the consent of the people. Climate justice demands reparations to enable the Philippines to develop resilience to climate change and compensation for losses and damages.’

The Jubilee Debt Campaign, Freedom from Debt Coalition, Jubilee South (Asia) and Christian Aid and have now launched a petition calling on lenders such as the World Bank and Asian Development Bank to cancel the Philippines’ debt. It can be signed at: http://jubileedebt.org.uk/actions/philippines-life-before-debt

Following the global jubilee movement calling for debt cancellation or repudiation of developing country debts, $130 billion of debt has been cancelled, mainly for African countries. The Philippines was excluded from the scheme because it was judged by the IMF and World Bank to be ‘too rich’.

However, over 15 million people in the Philippines are malnourished, and a similar number live in extreme poverty. |6| The numbers have changed little since Ferdinand Marcos was removed from power in 1986.

The money lent was often of little benefit to the country. Loans included finance for a nuclear power plant built on an earthquake fault line that never generated any electricity. |7|

Please visit our appeal page to find out more http://www.christianaid.org.uk/emergencies/current/philippines-typhoon-appeal/index.aspx

A running total of payments since Typhoon Haiyan is at http://jubileedebt.org.uk/actions/philippines-life-before-debt