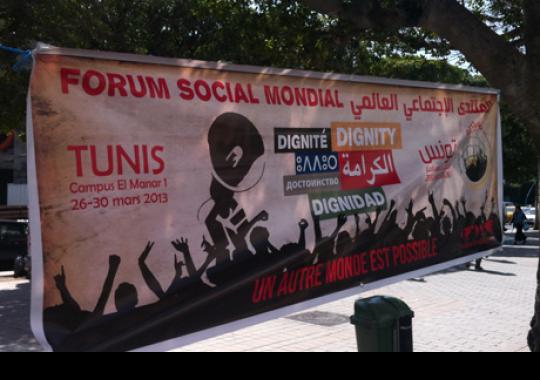 As the Social Movements Assembly of the World Social Forum of Tunisia, 2013, we are gathered here to affirm the fundamental contribution of peoples of Maghreb-Mashrek (from North Africa to the Middle East), in the construction of human civilization. We affirm that decolonization for oppressed peoples remains for us, the social movements of the world, a challenge of the greatest importance.

Through the WSF process, the Social Movements Assembly is the place where we come together through our diversity, in order to forge common struggles and a collective agenda to fight against capitalism, patriarchy, racism and all forms of discrimination and oppression. We have built a common history of work which led to some progress, particularly in Latin America, where we have been able to intervene in neoliberal alliances and to create several alternatives for just development that truly honors nature.

Together, the peoples of all the continents are fighting to oppose the domination of capital, hidden behind illusory promises of economic progress and the illusion of political stability. Now, we are at a crossroads where retrograde and conservative forces want to stop the processes initiated two years ago with the uprisings in the Maghreb-Mashreq region that helped to bring down dictatorships and to challenge the neoliberal system imposed on the peoples. These uprisings have spread to all continents of the world inspiring indignation and occupation of public places.

People all over the world are suffering the effects of the aggravation of a profound crisis of capitalism, in which its agents (banks, transnational corporations, media conglomerates, international institutions, and governments complicit with neoliberalism) aim at increasing their profits by applying interventionist and neocolonial policies.

They re-enforce conservatism and the control over women ́s bodies and lives. In addition, they seek to impose "green economy" as a solution to the environmental and food crisis, which not only exacerbates the problem, but leads to commodification, privatization and financialization of life and nature.

We denounce the intensification of repression to people ́s rebellions, the assassination of the leadership of social movements, the criminalization of our struggles and our proposals. We assert that people must not continue to pay for this systemic crisis and that there is no solution inside the capitalist system! Here, in Tunes, we reaffirm our committment to come together to forge a common strategy to guide our struggles against capitalism. This is why we, social movements, struggle:

- Against transnational corporations and the financial system (IMF, WB and WTO), who are the main agents of the capitalist system, privatizing life, public services and common goods such as water, air, land, seeds and mineral resources, promoting wars and violations of human rights. Transnational corporations reproduce extractionist practices endangering life and nature, grabbing our lands and developing genetically modified seeds and food, taking away the peoples’ right to food and destroying biodiversity.

We fight for the cancellation of illegitimate and odious debt which today is a global instrument of domination, repression and economic and financial strangulation of people. We reject free trade agreements that are imposed by States and transnational corporations and we affirm that it is possible to build another kind of globalization, made from and by the people, based on solidarity and on freedom of movement for all the human beings.

- For climate justice and food sovereignty, because we now that global climate change is a product of the capitalist system of production, distribution and consumption. Transnational corporations, international financial institutions and governments serving them do not want to reduce greenhouse gases. We denounce “green economy” and refuse false solutions to the climate crisis such as biofuels, genetically modified organisms and mechanisms of the carbon market like REDD (Reducing Emissions from Deforestation and Forest Degradation), which ensnare impoverished peoples with false promises of progress while privatizing and commodifying the forests and territories where these peoples have been living for thousands of years.

We defend the food sovereignty and support sustainable peasant agriculture which is the true solution to the food and climate crises and includes access to land for all who work on it. Because of this, we call for a mass mobilisation to stop the landgrab and support local peasants struggles.

- Against violence against women, often conducted in militarily occupied territories, but also violence affecting women who are criminalized for taking part in social struggles. We fight against domestic and sexual violence perpetrated on women because they are considered objects or goods, because the sovereignty of their bodies and minds is not acknowledged. We fight against the traffic of women, girls and boys.

We defend sexual diversity, the right to gender self-determination and we oppose all homophobia and sexist violence.

- For peace and against war, colonialism, occupations and the militarization of our lands.

We denounce the false discourse of human rights defense and fight against fundamentalism, that often justify these military occupations such as in Haiti, Líbia, Mali and Syria. We defend the right to people’s sovereignty and self-determination such as in Palestine, Western Sahara and Kurdistan.

We denounce the instalation of foreign military bases to instigate conflicts, to control and ransack natural resources, and to foster dictatorships in several countries. We struggle for the freedom of organization in trade unions, social movements, associations and other forms of peaceful resistance. Let’s strengthen our tools of solidarity among peoples such as boycott, disinvestment and sanctions against Israel and the struggle against NATO and to ban all nuclear weapons.

- For democratization of mass media and building alternative media, that are fundamental to overthrow the capitalist logics.

Inspired by the history of our struggles and by the strength of people on the streets, the Social Movements Assembly call upon all people to mobilize and develop actions - coordinated at world level – in a global Day of mobilization on the XXXX (day to decide)

Social movements of the world, let us advance towards a global unity to shatter the capitalist system! No more exploitation, no more patriarchy, racism and colonialism! Viva la revolution! Long live the people’s struggle.

We, the facilitation group of the Assembly of Social movements, wish to inform the public regarding the events that took place at the end of the assembly on march 29th of 2013, at the World Social Forum in Tunisia.

The program of the Assembly – a self-organized event supported by more than 50 organizations active in the World Social Forum - was interrupted in an aggresive manner by Moroccan delegates. They took over the stage and violently attempted to prevent the reading of the last section of the declaration where we were affirming that we “defend the right of peoples to self-determination and sovereignty, as in Palestine, the Western Sahara, and Kurdistan.”

We vehemently condemn this ocurrence and remind everyone that this is not the first time this ocurrs at the World Social Forum. We have documented that people who identify as members of civil society, from Morocco or the Moroccan diaspora in Europe, took similar actions at the Mediterranean Social Forum, which took place in Cataluña in 2005, and at the World Social Forum of 2011 in Dakar, where they interrupted the Women’s Assembly and made it impossible to state the affirmation of the defense of the self-determination of Saharawi women.
Furthermore, in Dakar there were sistematic acts of provocation and disturbance of activities organized by the Saharawi delegation.

This behavior is unacceptable. Furthermore, it contradicts the values of freedom of expresion, democracy, and mutual respect that are expressed in the Charter of Principles of the World Social Forum, and the principle of self-determination of peoples. These ocurrences should be noted when we discuss the future of the WSF.

We affirm, once again, our solidarity and active commitment with the Saharawi people and in favor of the respect for international agreements that recognize their rights. We re-affirm our position against intolerance and in favor of space for collaboration between men and women in the same struggle. We demand from the governments of Morocco and Tunisia the security of the social movement activists from those countries, and we call on all the participants in the WSF process who are committed to the Charter of Principles to stay informed regarding these events and alert for inititiaves of solidarity and protection on behalf of the international activists that are not afraid to defend the struggle of the Saharawi people for self-determination.

Richest 1% bag nearly twice as much wealth as the rest of the world put together over the past two years by Oxfam The super-rich outstrip their extraordinary grab of half of all new wealth in...

The House Speaker Crisis and the Transformation of the Republican Party

The House Speaker Crisis and the Transformation of the Republican Party By oaklandsocialist The last two times members of the House of Representatives had to resort to multiple ballots to elect...