Resisting with the Greeks 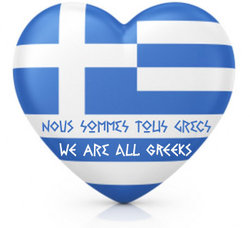 In the recent elections on May 6, Greek voters sanctioned the coalition forces which had applied austerity plans and surrendered to the dictates of the Troika (the IMF, the ECB and the European Commission). New Democracy and the PASOK (Pan-Hellenic Socialist Movement) have thus paid the price of their total submission to Greece’s creditors. The far right party, LAOS, a member of the coalition previously in power, has practically disappeared from the political scene.

The CADTM hails the Greek people who, since May 2010, have been relentlessly demonstrating their opposition to the violation of economic, social, civil and political rights inflicted upon them, so that an illegitimate debt can be repaid to those very banks and institutions who are the real culprits, in the international crisis.

In Spring 2012, the Greeks used the urns to express their rejection of austerity, after having already staged a dozen general strikes, numerous street demonstrations and repeated occupation of public squares.

Syriza, the main radical left-wing coalition and now the second political force in the country, has campaigned for the rejection of austerity policies, the cessation of payments and an audit of the Greek State’s public debt. Their demands include a total recasting of the treaty on the functioning of the European Union and the status of the ECB; the restoration of salaries and pensions, slashed after agreements signed with the Troika; an authentically redistributive system of taxation; an audit of banks and the nationalization of those which have received public funding; and finally, an end to the immunity enjoyed by members of parliament and public representatives.

If so many Greeks have voted for Syriza-backed candidates, it is because the party’s main leader, Alexis Tsipras, had the courage to propose a U-turn towards social justice and the restitution of Greek dignity. Many Greeks wish for a government that will show the same loyalty to the people as previous governments have shown to the national and international entities responsible for the collapse of Europe. The majority of Greeks want to remain within the European Union and the Euro-zone, while at the same time demanding that their rights be respected – this, too, is the position defended by Syriza, with the aim of foiling the plans of the Troika and the banks.

And this is why their democratic choice is meeting with such fierce opposition, both on the international scene, and within the country. The Greeks are made out to be the champions of irresponsibility, tax evasion, corruption and laziness. Threats of sanctions against Greece, should the people make the wrong choice, have been formulated by the heads of EU States and governments. The CADTM can only condemn this campaign of intimidation destined to persuade the Greeks that they should give up the idea of taking their fate into their own hands. The powerful means of communication and the blackmail used in the pursuit of this goal are also intended to persuade the people of other European countries, and beyond, that there is no alternative to the choices imposed by those who uphold the system.

The CADTM notes that talk of the generous aid handed out to Greece over the last two years is a gigantic hoax. In reality, the so-called rescue plans come to the rescue of the creditors, despite the fact that they are the ones largely responsible for the indebtedness of the Hellenic nation. European and North-American banks have used part of the public money injected to save them from bankruptcy in 2008-2009 to speculate on the Greek debt and have managed to make huge profits before pushing Greece towards the present profound crisis.

CADTM asserts that all loans that the Troika has granted Greece since May 2010 are odious, null and void, as they constitute a permanent violation of the economic, social, civil and political rights of the citizens of Greece.

Greek resistance shows the other countries of Europe how essential it is to revolt against a European Union that has been tailored to serve the interests of big private companies and the richest 1% of the population. The CADTM considers that the European Union must be recast, on the basis of solidarity among nations and through a truly democratic constitutive process. It is crucial that those treaties that have placed the process of European integration in the service of private interests be revoked; the European Stability Mechanism (ESM) and the Fiscal Compact, being ratified at the time of writing, must be firmly opposed.

The CADTM is committed to continuing the fight alongside the forces of solidarity to support the people of Greece, and to promote radical alternatives for the European Union and the policies it is in thrall to. The CADTM is actively participating in the citizens’ initiatives for an audit of public debt which are coming up in an increasing number of European countries, as well as in Tunisia and Egypt, especially through the International Citizen Audit Network (ICAN) -) founded in April 2012 |1|. These citizens’ audits are a precious tool for the collective reappropriation of public affairs and the construction of alternatives which benefit the people.

The CADTM calls upon all the elements of the social movement to join forces in supporting and carrying forward the hope born of alternatives rooted in resistance, starting with the Greeks’.

One response likely to bring about real social transformation and break away from neo-liberalism lies in mobilizing all Europe against illegitimate debt, austerity plans and the Fiscal Compact, in solidarity with the Greek people and all other peoples under attack.

|1| See : Coordinated efforts in Europe and North Africa to fight against Debt and Austerity

There are branches of CADTM Europe, part of the CADTM’s global network, in Greece, France, Belgium, Spain, Switzerland and Poland, with partner organisations in Italy, Portugal, the United Kingdom and Germany. For further information : www.cadtm.org