Syriza's electoral success marks the start of the first major battle against austerity. The whole continent should will them to win

The clear winner of the recent Greek elections is Syriza, a coalition of leftwing organisations active for several years. The fascist Golden Dawn party has also made stunning gains but its rise, disturbing as it might be, is neither the main outcome of the elections, nor yet a major threat to Greek society. Political momentum belongs to Syriza. If it gets its act together, it could help resolve the crisis and give a boost to the European anti-austerity movement.

The two staple parties of Greek government – Pasok and New Democracy – have been trounced for bringing the country to this pass over four decades, and for implementing the bailout agreements. The Greek electorate has clearly stated what it does not want: old politics and the so-called rescue by the troika of the EU, the International Monetary Fund and the European Central Bank.

During the past two years a parade of mediocre Greek politicians have pretended to negotiate with the troika, while decrying their own country as "corrupt". They were backed by technical experts terrified at the thought of displeasing the lenders to Greece. Some of the politicians and experts were people who had also handled the disastrous Greek entry into European monetary union. The result was two bailout agreements, in May 2010 and March 2012 – monuments to bad economics and social callousness. By the end of 2012 austerity will have led to contraction of the Greek economy by 20%, a jump in unemployment toward 25%, a full-blown humanitarian crisis in the urban centres, and a completely unmanageable public debt. Greece is dying on its feet. Meanwhile its old political class twitters on about participating in the European "game" and making structural reforms that will bring growth in the future. 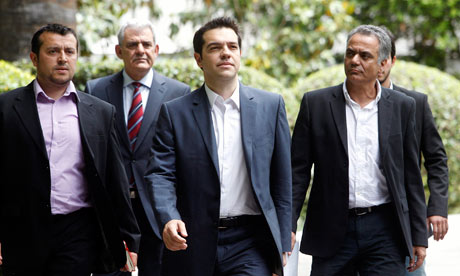 Syriza has caused an earthquake by denouncing March's bailout. It has called for a moratorium on debt payments, an international commission to audit Greek debt, aggressive debt write-offs, deep redistribution of income and wealth, bank nationalisation, and a new industrial policy to rejuvenate the manufacturing sector. These measures are exactly what the Greek economy needs. Implementing them depends entirely on rejecting the recent bailout and stopping payments on the debt.

Syriza believes that the measures can be introduced while the country remains within the eurozone. It has been unwilling to call for Greek exit, thus increasing its appeal to voters who worry about the aftermath of exit and believe that the euro is integral to the European identity of Greeks. In my view, and that of many other economists, it would be impossible for Greece to stay in the eurozone if it went down this path. Moreover, exit would be both necessary and beneficial to the economy in the medium term, and remains the most likely outcome for Greece. If Syriza really wanted to contribute to solving the crisis, it should get itself ready for this eventuality.

Nonetheless, the pressing issue at the moment is to free the country from the stranglehold of debt and austerity. As long as Syriza is prepared to take action to achieve these aims, and the Greek people wish to give it the benefit of the doubt on the euro, its role can be positive. At the very least, it offers a chance for Greece to avoid a complete disaster that might truly lead to the rise of fascism.

The current round of domestic political negotiations is unlikely to lead to a government being formed, especially one that could continue to implement the terms of the bailout. There will probably be new elections in the near future and Syriza stands every chance of winning decisively, thus forming a coalition government of the anti-bailout forces. But for this, Syriza should realise its own limitations, and actively seek to create the broad political front that Greece needs.

It is important to seek unity at all times, avoiding both gloating and the ancient factionalism of the Greek left. Syriza will need the active co-operation of the rest of the left if it is to muster sufficient forces to deal with the storm ahead. It is equally important to improve its appeal to experienced and knowledgeable people across society, for it will need many more in its ranks.

Finally, if there is a new government led by Syriza, it will rely on the support of people across Europe to tackle the catastrophe inflicted on Greece by the eurozone crisis. The first major battle against austerity is about to begin in Greece, and all European people have an interest in winning it.