Funding shortages appear to be leading Greek hospitals to get tough with patients who are not entitled to free healthcare - but when patients are broke there is no easy solution. One new mother says she was told she wouldn't be allowed to take her baby home after giving birth.

When the Athens maternity hospital where Anna gave birth asked her to pay for the costs of her Caesarean section, she told them she did not have the 1,200 euros (£970, $1,500) they wanted.

They responded, she says, by threatening to keep hold of her baby until she paid the full amount. 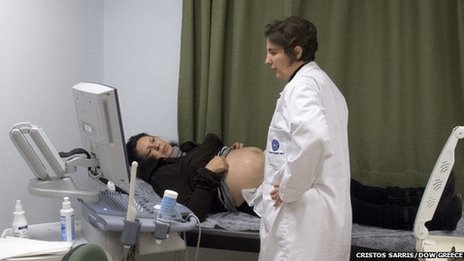 Like hundreds of thousands of people in Greece, Anna (not her real name) is not eligible for free non-emergency healthcare. The Greek state only provides that for people who are employed and making regular national insurance contributions, or, when people are unemployed, if they are fully up to date with tax payments.

With unemployment at over 21% and new "solidarity" taxes appearing each month, many people have been left without any kind of medical coverage, says the director of the charity Medicins Du Monde in Greece, Nikitas Kanakis.

"If you count all the people who have dropped below the poverty line, all those who owe something to the tax man, even if it is a parking ticket, anyone who has been unemployed for over a year, and all those who must have let their insurance payments lapse recently, it wouldn't surprise me at all if we're talking about a quarter of the population."

Greek governments have cut healthcare spending by 13% over the last two years and instructed hospitals to tighten their belts dramatically.

At the same time, public health facilities have seen a 30% increase in demand, as middle class Greeks stop paying for private healthcare.

Doctor Katerina Stypsanelli says that in the past managers would not always insist on payment from the poorest patients, but are now under pressure to enforce the rules.

"It is not the hospital's fault, it is the government's policy and budget tightening which is forcing their hand," says Stypsanelli, who works at a sister hospital under the same administration.

Anna lives in a tiny shack with a concrete floor and crumbling walls in Loutsa, a coastal town about an hour's drive from the capital. The entire household, including her husband, father and brother are all dependent on the meagre earnings her mother makes cleaning houses.

'It's fair to charge'

Hospitals are very squeezed financially at the moment and they are even having difficulties paying their suppliers at times.

So they need to make sure they cover their costs, either by charging people's bills to the social security office or by charging patients themselves.

It is reasonable for a hospital to ask patients to pay for the costs of their treatment.

It is not a system that is particular to Greece, it is exactly the same in at least half of European countries. If you are not covered, you are in trouble.

The family, who were all employed until the crisis hit, say they have run out of savings and are behind on their rent. Their landlord has given them until the end of the month to move out.

Anna says she doesn't know how she will manage to pay for the baby's vaccinations.

"The hospital asked us for a lot of money and the man at the administration office told us we had to pay the whole amount or they would not let the baby leave the hospital with me," she says.

"Who wouldn't be scared by that? You have just given birth and they want to keep hold of your baby if you can't afford to pay? Don't these people have children of their own?"

Anna says the hospital made the same threat when she gave birth to her first child, 20 months ago. Austerity measures were already being introduced, but she was still working despite the recession and managed to scrape together the money to pay the bill.

This year, after giving birth to her second child, she knew there was no way she could pay, and seriously feared that the hospital would carry out its threat, until help came from Stypsanelli - a member of Women Against the Debt - which campaigns against government-imposed austerity measures affecting women.

"I made a call to the director of the hospital and he gave the order to allow her to take the baby but told her to pay in instalments," she says.

The director of the hospital where Anna gave birth, Nikos Faldamis, denies that he was contacted about Anna's case. He says his staff never threatened to hold Anna's child and that they offered her the option of paying in instalments right from the start.

"This is not a pawn shop where we hold your ring as a deposit. Nothing like that has ever happened here," he says. "The lady gave birth and was due to be released on a Sunday but since our administrative staff don't work on weekends she had to wait until Monday at which time both she and her baby left this hospital together."

He says his hospital provides the same treatment to everyone who walks through their doors, without asking whether they can afford to pay.

"But after treatment it is natural for us to then ask how the costs will be paid; if they are not covered by insurance or the state we issue a bill through the tax office or we ask them to sign a form promising to pay whenever they can find the money," he says.

Some experts say the general principle that patients pay for treatment is fair and necessary.

Prof Lycurgus Liaropoulos, a healthcare economist who has advised the Greek government on where they can make savings, says that hospitals are under such pressure that they need to cover their costs.

He adds: "It is not a system that is particular to Greece, it is exactly the same in at least half of European countries. If you are not covered, you are in trouble."

Stypsanelli, however, says Anna's is not an isolated case. In December last year a woman was obliged to find the money to pay the same hospital to release her baby, she recalls.

"There are likely to be many more cases that have not come to our attention because these women are vulnerable and scared," she says.

Stypsanelli believes that where other hospitals have trade unions and campaign groups that stick up for patients, the hospital where Anna gave birth tends to follow the letter of the law.

In 2011 Greek politician, Litza Amanatidou, raised questions in parliament about a woman who said her baby was held for over a week by the same hospital until she was able to pay the money she owed for the birth.

"The woman told us she had to visit the hospital several times a day to breastfeed her baby," she says.

Ms Amanatidou's party, Syriza, a coalition of left-wing groups that was propelled into second place in last week's elections, wants Greece to ditch the promises of austerity the state made to the European Union in return for bailout funds.

The MP admits that the public health care system in Greece was bloated and corrupt and in need of reform, but she objects to the way the deep cuts are being implemented.

"The government's policies are leading to human rights abuses and if they are continued they will lead to a catastrophe in public health," Ms Amanatidou says.

Anna was born in Albania and has lived in Greece since she was four but this is not just a problem affecting immigrants, says Medecins Du Monde, a medical charity in Greece.

Yannis and Spiridoula Abatzis, who are both Greek nationals, gave birth to a son in March who did not exist for the first few months of his life, at least as far as the Greek state was concerned.

"The hospital told me they wouldn't give me the release papers for the child until I paid. I didn't have the money so I just took the baby and left," Mr Abatzis explains.

The new parents, who live in Perama, one of Greece's poorest towns, were unable to claim benefits for their child, because he lacked a birth certificate, until staff at Medicins Du Monde helped persuade the local hospital to overturn its decision.

You can lose your cover if:

But in the last six months, a five-euro charge introduced for all non-emergency care, even if patient is covered

The unemployed couple live in an illegal shack and expect the electricity to be cut off any day.

"We have logs for the fire so we can cook and I will use the neighbour's fridge," she says.

There is clearly no money in their household.

"It looks like they owe taxes to the state even though that is not exactly the case," she explains.

And the consequence of that, she says, is that Yannis Abatzis could be arrested and in theory even imprisoned for tax evasion.

The same could, in theory, happen to Anna, who says she has no money to pay the hospital bill, even in instalments.

The anti-austerity parties like Syriza, who did so well in Greece's recent election, insist that cases like these provide reason enough to drop out of the European bailout deal.

But if Greece is forced to leave the eurozone there are no guarantees that life will get any easier for those on the bottom rung of the ladder.