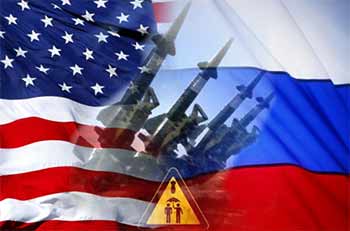 It is not an exaggeration to say that what is currently happening in the heart of the European continent is the most dangerous moment in contemporary history and the closest to a Third World war since the Soviet missile crisis in Cuba in 1962.

True, neither Moscow nor Washington has hinted at the use of nuclear weapons so far, although there can be no doubt that the two countries did put their nuclear arsenals on standby in the face of the current circumstances. It is also true that the level of military alert in America has not yet reached the level it reached in 1962. But Russian military build-up at the borders of Ukraine exceeds the levels of troop concentration at a European border witnessed in the warmest moments of the “Cold War,” while Western verbal escalation against Russia has reached a dangerous level accompanied by military gestures and preparations that create a real possibility of a conflagration.

The rulers of the great powers are playing with fire. Vladimir Putin may think that this is like moving queen and rook on a chessboard in order to force the opponent to withdraw their pieces; Joe Biden may believe that it is a suitable opportunity for him to repolish his domestic and international image, very much faded since his embarrassing failure in staging the withdrawal of US forces from Afghanistan; and Boris Johnson may believe that his government’s pretentious bragging is a cheap way to divert attention from his domestic political problems. The fact remains, however, that events in such circumstances quickly acquire their own dynamics to the beat of the drums of war—dynamics that surpass the control of all individual actors and risk triggering an explosion that none of the players had originally wanted.

The current tension between Russia and Western countries in Europe has reached a degree not seen on the continent since the Second World War. The first European war episodes witnessed since then, the Balkan wars in the 1990s, never reached the level of prolonged tension and alert between the great powers themselves that we are witnessing today. If a war were to break out as a result of the current tension, even if it initially raged only on Ukrainian soil, the central location and sheer size of Ukraine are enough to make the danger of the fire spreading to other European countries bordering Russia, as well as to the Caucasus and Central Asia, a grave and imminent danger.

The main cause of what is happening today relates to a series of developments, for which the first and major responsibility falls on the most powerful who had the initiative—and that is, of course, the United States. Since the Soviet Union entered terminal agony under Mikhail Gorbachev, and even more so under the first president of post-Soviet Russia, Boris Yeltsin, Washington behaved toward Russia like a merciless victor toward a vanquished, whom the victor wants to prevent from ever getting back on its feet. This translated in the expansion of US-dominated NATO by including countries that had previously belonged to the USSR-dominated Warsaw Pact, instead of dissolving the Western Alliance in parallel with its Eastern counterpart. It also translated in the West dictating an economic policy of “shock therapy” to Russia’s bureaucratic economy, provoking huge socio-economic crisis and collapse.

These premises are what most naturally led to the result that one of Gorbachev’s most prominent advisers—a former member of the Supreme Soviet and of the Central Committee of the Communist Party of the Soviet Union—Georgi Arbatov, had warned against thirty years ago, when he predicted that Western policies toward Russia would lead to “A New Cold War” and the emergence of an authoritarian rule in Moscow reviving Russia’s old imperial tradition. This has actually happened with Putin’s ascension to power, representing the interests of the two most important blocs in the Russian capitalist economy (in which state capitalism and private interests are mingled): the military-industrial complex—which employs a fifth of the Russian industrial labor force, in addition to the armed forces personnel—and the oil and gas sector.

The result was that Putin’s Russia is practicing a policy of military expansion that goes far beyond what prevailed during the time of the Soviet Union. Then, Moscow did not deploy combat forces outside the sphere that had fallen under its control by the end of World War II, until it invaded Afghanistan at the end of 1979, an invasion that precipitated the USSR’s death agony. As for Putin’s Russia, after it regained economic vitality thanks to the increase in fuel prices since the turn of the century, it has intervened militarily outside its borders at a frequency comparable to that of US military interventions before the defeat in Vietnam, and between the first American war against Iraq in 1991 and the inglorious exit of US forces from that country twenty years later. Russia’s interventions and invasions are no longer confined to its “near abroad,” i.e. those countries adjacent to Russia, which were dominated by Moscow through the USSR or the Warsaw Pact. Post-Soviet Russia has intervened militarily in the Caucasus, especially in Georgia, in Ukraine and most recently in Kazakhstan. But it has also been waging a war is Syria since 2015 and intervening under a transparent cover in Libya and more recently in Sub-Saharan Africa.

Thus, between renewed Russian belligerence and continued US arrogance, the world finds itself on the brink of a disaster that could greatly accelerate the annihilation of humanity, to which our planet is moving by way of environmental degradation and global warming. We can only hope that reason will prevail and that the great powers will reach an agreement addressing Russia’s security concerns and recreating conditions for a renewed “peaceful coexistence” that would reduce the heat of the New Cold War and prevent it from turning into a hot war that would be a huge catastrophe for all of humanity.

• Translated from the Arabic original published in Al-Quds al-Arabi, January 25, 2022.

Europe: The rulers of the great powers are playing with fire by ACHCAR Gilbert It is not an exaggeration to say that what is currently happening in the heart of the European continent is the most...