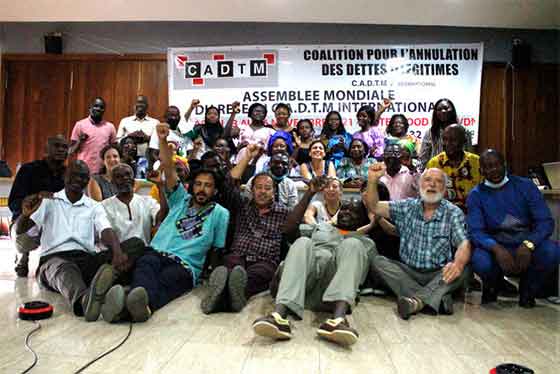 The Committee for the Abolition of Illegitimate Debt (CADTM) network held its conventional World Assembly from 13-16 November 2021, at Dakar, Senegal. This was the third World Assembly after the first in Morocco (May 2013) and the second in Tunisia (April 2016), all held on the African soil. This major event was held for 4 days, simultaneously in person (with 37 delegates, 19 women and 18 men) and online (34 participants), with a large women’s representation.

In addition, there were delegates from Argentina, Brazil, Colombia, Uruguay, Puerto Rico, Spain, Portugal, Switzerland, India, Pakistan and Japan who participated online from their respective locations. In sum: delegations from 30 countries participated at the CADTM World Assembly.

The sessions of this World Assembly were held in three languages: English, French and Spanish, with simultaneous translation.

The meeting took off with a general presentation of CADTM objectives in the current context. This was followed by a report on the international political and economic situation. This report analysed the general economic context, the evolution of the COVID pandemic and the global health crisis, the ongoing climate and environmental crisis, the increase in authoritarian and/or dictatorial forms of government on a global scale, the offensive of Capital against Labour and the patriarchal offensive as well, the level of resistance and the state of the movements contesting the capitalist and patriarchal system and finally the major challenges facing CADTM.

The above report on the international situation was drawn up from 4 continental reports (Africa, Latin America and the Caribbean, Europe and Asia). The discussions were enriched by interventions made by the various delegations.

A very rich assessment of the Shared International Secretariat (SIS) of CADTM network was presented by ATTAC CADTM Morocco and CADTM Belgium. It covered the activities organised, the training courses, the press releases and declarations, the websites and Facebook pages, the electronic newsletters, the publications (books and magazines), the educational videos, the synergies with the different global associates, the expansion and strengthening of CADTM, the financial resources, etc. 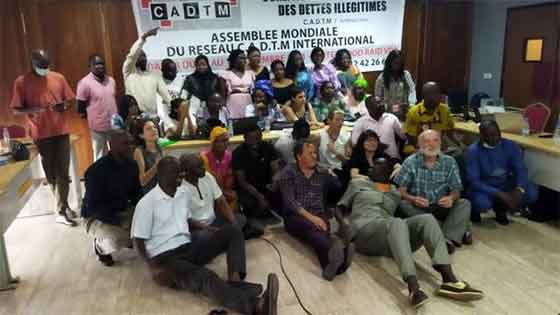 The political charter of the CADTM network, established in January 2009 and amended by the International Council of CADTM in September 2019, has been updated. The main points added are: illegitimate debts in the North, illegitimate private debts, the ecological crisis, the women’s movement, and legitimate debt for a transitional programme. The amendments to the organisational charter concerned the sanctions to be taken in case of sexist behaviours. The integration of the Coordination of Feminist Struggles in the charter of CADTM Africa is an exemplary initiative that should be followed by the CADTM members in the other continents. The shared international secretariat is in charge of producing the final edition of the two amended charters based on the contributions to the discussion.

The World Assembly of the network then ratified the new memberships of the North African Network for Food Sovereignty, Kenya Peasants’ League, Citizen’s Front for Audit in Puerto Rico and also of the African feminist collective, Womin based in South Africa, which will be operationalised in the coming months.

Building on their participation in the World Assembly, participants travelled to Lake Wouye in Malika, a working class neighbourhood in Dakar to take part in a programme organised by CADTM Senegal. The CADTM international delegates met with some thirty people who, through their association, are involved in a project to safeguard the local ecosystem.

On the last day of the World Assembly, participants reviewed the major activities in which their organisations and the CADTM network as a whole would soon be involved. These include, in December 2021, the African Alliance for Food Sovereignty which will meet in Nairobi, Kenya, and also the General Assembly of the North African Network for Food Sovereignty which will be held in Tunis. CADTM will continue its campaign for lifting patents on vaccines, medicines and treatments to combat the coronavirus. In 2022, the CADTM network will participate in the World Social Forum (WSF) which is scheduled to take place in the Mexican capital in May. Just before the WSF, the CADTM Latin America and Caribbean (AYNA) will also meet in Mexico City to hold its annual meeting. In 2022 there will also be other international activities in which the CADTM will actively participate: in August, the Assembly of Caribbean Peoples in Haiti and the European University of Social Movements in Germany organised by the ATTAC; the counter-summit to the annual meetings of the World Bank and the IMF in Morocco, in October; and probably in November, the Peoples’ Forum in Mali.

Forty Years Later, Reds Is Still One of the Best Films Ever Made About Revolutionary Politics

Forty Years Later, Reds Is Still One of the Best Films Ever Made About Revolutionary Politics By Jim Poe (Jacobin magazine) In 1981, Warren Beatty directed Reds, a retelling of John Reed’s...

A success for CADTM: the world assembly of the network, held in Dakar from 13-16 November, 2021 The Committee for the Abolition of Illegitimate Debt (CADTM) network held its conventional World...