The Red Sports International (1921–1937)
Harnessing Recreation to the Revolution 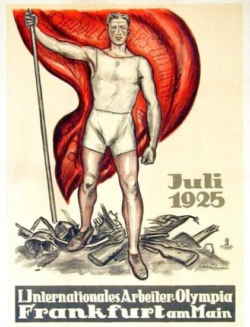 On 23 June 1921, a gathering of about 20 Communists in Moscow founded an international association to unify “revolutionary proletarian sports and gymnastics organizations … into support centers for the proletariat in its class struggle.”[1]

Merging sports and class struggle on a global scale? A tall order, to be sure. But the 1921 Moscow initiative rested on two solid pillars: the traditions of the prewar Second International and the achievements of the young Soviet republic.

The Moscow consultation on sports brought together delegates from eight countries who happened to be attending the Third World Congress of the Communist International then in session. However, the initiative came not from the Comintern but from Nikolai Podvoisky, head of the Soviet Council for Physical Culture, an agency charged with preparing Soviet youth for military conscription.[2]

Podvoisky’s initiative bore fruit only slowly. It was not until July 1922 that a second conference, held in Berlin, established a structure to coordinate Communist sports initiatives. The new organization took the name “International Association of Red Sports and Gymnastics” – variously abbreviated as “Red Sports International” (RSI) or “Sportintern.” Only in November 1922 did the Comintern’s Executive Committee lend its official support.

Meanwhile, sports associations with a Social Democratic orientation had come together in 1920 in the Socialist Workers Sports International, informally known as the Lucerne International, after the location of its organizing centre. It which then claimed a total membership of one million.

When the Lucerne International scheduled a Workers Olympiad in 1925, it rejected Sportintern’s application to participate. The Lucerne alliance refused to maintain any formal ties with the pro-Communist body, later rejecting an invitation to RSI’s own athletic festival (“Spartakiade”) in 1928. 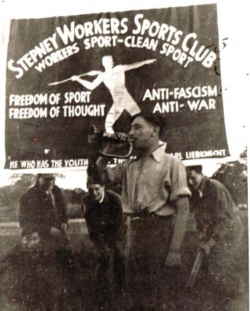 Sportintern organized four Spartakiades in all – one winter and three summer events – in 1928, 1931, and 1937. The total of Sportintern affiliated members outside the Soviet Union never approached that of the Lucerne alliance. Sportintern membership outside the Soviet Union was recorded in 1931 as 277,500, including 125,000 in Germany and 80,000 in Czechoslovakia, as against 1.87 million in the Lucerne associations.[3]

Available data indicates that non-members of Communist parties made up a large majority of participants in Sportintern affiliates (Germany: about 90%; France: close to 90%; Czechoslovakia: more than 70%). No gender breakdown is available. Sportintern’s list of affiliates is limited to groups in Europe and North America.[4]

At its 1928 international conference, Sportintern fell in step with the ultraleft policies adopted that year by the Comintern. This new course effectively barred further attempts at unity with the Lucerne International. The Comintern’s sectarian refusal of unity in action with reformist-led organizations was decisive in opening the door to the Nazis’ 1933 assumption of power in Germany.

By May 1933, the workers’ sport movement in Germany was outlawed, and many of its leaders were murdered or banished to concentration camps. German Fascism thus wiped out the Sportintern’s largest national affiliate.[5]

In 1935, the Comintern’s seventh and last world congress endorsed once more efforts at unity in action with components of the Second International and also with left-wing bourgeois parties. New possibilities opened up for Sportintern to seek unity with the Lucerne International and beyond. During the years that followed, however, Sportintern’s efforts were affected by disorientation flowing from “popular front” policies, the murderous Stalin purges in the Soviet Union, the Moscow regime’s 1939 pact with fascist Germany, and the spread of war across Europe.[6]

Nonetheless, in 1937, a longstanding goal of the Red Sport International was finally achieved. The Sportintern Spartakiade was celebrated from 25 July to 1 August in Antwerp jointly with the Social-Democratic Lucerne International. Fifteen countries were represented; no less than 27,000 athletes took part; 80,000 spectators attended the final event; 200,000 witnessed the closing parade across the city.[7]

But for Sportintern activists, this triumph was indeed hollow. Three months earlier, in April 1937, the Comintern Executive Committee had, without explanation, dissolved the Red Sport International and all its structures.[8]

My own survey of delegates mentioned in the proceedings of the Comintern’s second and fourth congresses shows that at least 66% of delegates within Stalin’s reach perished during this repression; only 22% escaped punishment.