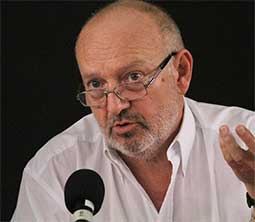 The pandemic we’re coping with is a zoonosis. Zoonoses are infectious diseases caused by pathogens jumping species from animals to humans. The pathogen may be a virus, a bacterium or a prion.

So far as we know, zoonoses have been present throughout human history. Scientists estimate they’ve caused about 50% of all human disease, and they’re becoming more frequent. For the past thirty years, according to the World Health Organization (WHO), 60% of emerging infectious diseases have been zoonoses – even 70%, according to the Intergovernmental Science-Policy Platform on Biodiversity and Ecosystem Services (IPBES) special report on pandemics – and three quarters of all new pathogens present in humans come from animal species. AIDS, Zika, Chikungunya, Ebola, H1N1, Middle East Respiratory Syndrome, H5N1, SARS, Creutzfeldt-Jakob disease and other diseases of the last few decades were zoonoses.

This growing threat comes as no surprise to biologists and epidemiologists. A few years ago, the WHO predicted that the greatest threat to human health would probably come from a previously unknown, emerging disease – Disease X – and that this disease would most likely be a zoonosis. The growing number of zoonoses and their impact on human health stem from the ecological crisis, which is deeply rooted in the capitalist destruction of the environment. Five factors must be taken into account.

The first and most obvious factor is changes in land use, destruction of ecosystems and fragmentation of habitats. As businesses cut down forests, destroy wetlands, build infrastructure and operate mines in the wilderness, they reduce the distance between humans and animals, thus increasing the likelihood of pathogens jumping from animals to Homo sapiens.

Obviously, these interactions between humans and animals happen more frequently at the frontiers of human expansion because of changes to the natural landscape and increased encounters with animals. For example, researchers showed that deforestation and habitat fragmentation in Uganda increased direct encounters between primates and people, as primates ventured out of the forest to raid crops and people ventured into the forest to collect wood.

A second factor, linked to the first one, is the dramatic decline in biodiversity. Many ecologists have long suspected this, but a new study confirms their hypothesis: while some species are going extinct, those that tend to survive and thrive – rats and bats, for instance – are more likely to host potentially dangerous pathogens that can make the jump to humans.

Researchers compiled more than 3.2 million records from several hundred ecological studies at sites around the world, ranging from native forests to cropland to cities. They found that the populations of species known to host diseases transmissible to humans – including bats, rodents, some passerine birds and various primates – increased as the landscape changed from natural to urban, and as biodiversity generally decreased. This might explain why jumps of pathogens from animals to humans are strongest for rodents, bats and passerine birds, underpinning the global importance of these taxa as zoonotic reservoirs.

A specific driver of biodiversity decline is organized crime: its role should not be underestimated. As people often linked to criminal organisations pan for gold in the Amazon and organize the clandestine trade of wild species (often rare species, carrying many viruses), or of « bush meat », they also reduce the distance between animals and humans and create favorable conditions for pathogens to jump species.

A third factor is climate change. We don’t have direct evidence that climate change is influencing the spread of zoonoses, but we do know that climate change alters how we relate to other species on Earth, and that matters to our health and our risk of infection. As the planet heats up, animals big and small, on land and in the sea, head to the poles to get out of the heat. That means animals are coming into contact with other animals they normally wouldn’t meet, and that, together with species trafficking, creates an opportunity for pathogens to get into new hosts.

A fourth factor, linked to land-use change and biodiversity loss, is industrial breeding. Actually, this activity has nothing to do with breeding: it should be called “flesh industry”. The Flemish part of my country hosts 5 million humans and 42 million chickens. Denmark breeds more pigs than humans. There are today, all over the world, huge industrial concentrations of poultry, pigs and cows, artificial concentrations of animals which can also serve as a source for the spillover of infections from animals to people. For example, Danish authorities recently decided to kill 17 million minks because they hosted various mutations of the virus SARS-CoV-2.

A fifth factor, not to be underestimated in the case of SARS-CoV-2, is air pollution. Several studies (in Italy, the US, Germany and France) show a clear correlation between air pollution and outbreaks of the disease. The same evidence was presented a few years ago by Chinese scientists, during the SARS epidemics. Air pollution is especially intense during a meteorological phenomenon called thermal inversion, and it is well known that fine particle pollution increases the risk of respiratory disease in general. Not surprisingly, it also increases the risk of Covid-19. But that’s not the whole story: recent research on this topic tells us more. According to scientists, fine particles could transport other pathogens, bacteria for instance, that could worsen the disease. For example, there appears to be a link between peaks in European mortality rates due to Covid-19 and dust blown over from the Sahara under specific meteorological conditions. Combined with the political underestimation of the threat and the effects of the cuts in the health services, pollution could be an objective factor explaining the severe mortality rates in regions like Lombardy in Italy, all of Belgium, the Paris region, and Wuhan, in China (although nobody knows the exact number of casualties for this country).

Biologists have been warning us for decades about the risk of pandemics coming from the destruction of ecosystems and the loss of biodiversity. Governments didn’t listen to them, and neither did we, the left - we have to admit that. We made huge progress by realising that social crises and ecological crises are two sides of the same coin. We began developing a genuine ecosocialist program. But most of us were unaware of the pandemic risk arising from these combined crises. We must quickly change that and complete our vision: the risk of pandemics is a fifth major ecological risk in addition to those identified by the International Biosphere-Geosphere Program: climate change, biodiversity loss, the eutrophisation of waters and soil loss. All these risks are connected, and pandemics are a manifestation of this intertwining.

Of course, the five ecological factors contributing to pandemics are not purely ecological. The destruction of ecosystems, land use change, loss of biodiversity, air pollution, the migration of species etc. are social factors, too. They arise from the growing antagonism between the continuous accumulation of capital on the one hand and the limits of the planet on the other. But beware: there’s another global “explanation” for the crisis, a reactionary one: that of the Neo-Malthusians who say that casualties of the virus are inescapable, even necessary, because “there are too many of us on Earth”, because our species exceeded Earth’s “carrying capacity”. The fight against these false theories is very important ideologically, but also from a political and practical point of view.

First, blaming pandemics on a “population bomb” is scientifically unfounded. Rabbits, for instance, eat grass. Earth’s carrying capacity for rabbits depends directly on the amount of grass available. But, unlike rabbits, we produce our social existence collectively. So the carrying capacity for our species depends on the mode of production. Of course, the population cannot grow infinitely, but it depends on two parameters: one is the maximum number of people that any given mode of production can feed; the other is the minimum number of people necessary to make that mode of production function. This second parameter is key if we want to elaborate a structural program to face what the IPBES calls “a new era of pandemics”.

By definition, fisheries, forestry, agriculture, mining and breeding are activities at the frontier between humankind and the rest of nature. These activities’ obedience to the law of profit is the basis for the five ecological factors mentioned above. At the same time, it is the basis for an overpopulation that is not absolute, but relative, linked to the capitalist mode of production. Indeed, each of theses activities can be organised in a totally different way, with totally different impacts on the rest of nature, and totally different needs for human labor. Each of these activities can be oriented in a way that favors biodiversity, climate, jobs, health, public finance and emancipation. Thanks to your comrade Christian Adams, a South African fisher, I discovered an excellent scientific article presenting concrete evidence for this stance on the basis of a comparison between small fisheries and industrial fisheries. The same holds true for the other sectors of frontier activities.

Within this analytical framework, it is our task to elaborate demands relating to the activities at the frontier between humankind and the rest of nature, concrete alternatives. These are immediate demands like “stop subsides to agribusiness and industrial fisheries”, “support agroecology and the peasants”, “dismantle the flesh industry, which is unsustainable from an ecological, ethical, sanitary and economic point of view”, “stop deforestation, act in favor of a common, responsible management of resources” etc. But one thing we have to be conscious of is that these reforms, although immediate, entail huge social change. Actually, they require another society, they require a revolution. The reason is simple: the appropriation of land, sea and natural resources in general forms the basis of capitalism. If you want to change the basement you have to destroy the building and replace it with a new one that give hope for a good life, Buen Vivir. Ecosocialism is the name we give to this new society.

Europe: The rulers of the great powers are playing with fire by ACHCAR Gilbert It is not an exaggeration to say that what is currently happening in the heart of the European continent is the most...