Dexia: What if we stopped banking? 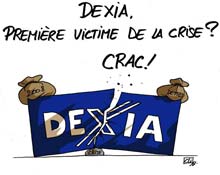 Having saved the banks from bankruptcy, States have seen their public debt skyrocket. Government authorities are now under pressure from the financial markets and European authorities (and the IMF, in some cases) to adopt austerity plans in order to find the necessary financial resources to reimburse the debt. Although its situation is less tragic than that of Greece, Belgium is no exception.

Its situation could still deteriorate if the State guarantee of 54.45 billion euros awarded on 18 October 2011 to some of Dexia’s creditors were applied. This is why three associations (CADTM, ATTAC Bruxelles 2 and ATTAC Liège) have introduced an appeal before the State Legislative Council in Belgium to revoke the royal decree authorising these guarantees.[1] This legal battle is part of a political fight for the cancellation of the illegitimate public debt, including that caused by bailing out the banks. This struggle concerns us all because it is the people who are likely, once again, to be made to bear the costs if the guarantees were to be activated. This is why a support group (including some forty high-profile Belgians - academics, representatives of associations, NGOs, trade unionists, artistes, etc.) has been formed to support the legal appeal. On 18 October 2012, the group published this article in Le Soir, Belgium’s main French-language newspaper.

18 October by the Support Committee for the legal appeal introduced by CADTM Belgique, ATTAC Bruxelles 2 and ATTAC Liège against the Dexia guarantees.

One year ago, Dexia was bailed out by the State for the second time. After paying out 4 billion euros to take control of the Belgian branch, now re-christened Belfius, the Government of the day, on 18 October 2011, issued a royal decree that committed Belgium to jointly guarantee, together with France and Luxembourg, the loans of the Dexia Group (of which Belfius is therefore no longer a part) for the next twenty years. The sum guaranteed by the Belgian State according to the terms of the royal decree, amounts to 54.46 billion euros (excluding interest and incidental expenses), i.e. 15% of Belgium’s gross domestic product! In actual fact, this means that if Dexia is unable to reimburse its debts, then the state authorities must step up immediately to make the necessary payments. In fact, the decree of 18 October specifies that these guarantees are payable immediately upon demand. In other words, the State has no way of defending itself even if Dexia were to continue to make risky investments; it is precisely these types of operations that triggered its debacle and the two bail-outs from the public purse.

There exists a real risk, therefore, that the public could once again be made responsible for reimbursing private debt unless this state guarantee is cancelled. It’s possible since a request for revokation of the decree of 18 October submitted to the State Legislative Council by three Belgian associations (CADTM, ATTAC Liège and ATTAC Bruxelles 2) is currently under review. These associations, together with ecologist Members of Parliament Zoe Genot and Meyrem Almaci, are collectively calling for the decree to be revoked because it contains a number of flaws and violates several fundamental provisions of Belgian law, including the Constitution. Indeed, the federal Parliament which, by virtue of the Constitution, is authorised to intervene in budget matters, neither deliberated nor voted any laws for the granting of these guarantees of 54.46 billion euros. Yet, the consequences of activating these guarantees would be disastrous for the state budget. The consequent dramatic increase in public debt would still be used as blackmail, to justify imposing an additional austerity burden on the population. Furthermore, our parliamentarians would be sidelined, unable to intervene until 2031 because the decree in question authorizes the Finance Ministry exclusively to conclude guarantee agreements with Dexia’s creditors. Apart from the inherent tragic social and economic consequences, maintaining this royal decree would lead to a blatant violation of the basic rules of any democratic state.

And why is all this being done? Simply to save a bank that is doomed to fail. In fact, these guarantees are intended to keep Dexia afloat (the bank no longer has savings deposits) while it offloads its assets, each more toxic than the other. Yet, even with these guarantees, Dexia continues to lose money, so much so that its Managing Director Karel De Boeck, has stated that Dexia will need a fresh injection of capital by the States by the end of this year or the beginning of 2013. In other words, Belgium must prepare, once again, to refloat the sinking ship that is Dexia! The cost of the operation is estimated to be between 5 and 10 billion euros, yet another sum that will bloat the public debt.

These guarantees are therefore not only dangerous for the population and democracy, but are also incapable of resolving the “Dexia problem”. In these conditions, cancelling them appears to be the first essential step towards resolving the impasse. The next step would be for the political leaders to put in place other measures to protect the population. In the meantime, the citizen debate on alternatives must be launched immediately, drawing inspiration from the experiences of other countries. For example, the United States Congress recently adopted a new legal framework defined by the Dodd-Frank Act and the Volcker Rule. The aim is to avoid having to rescue any major financial institution by opting clearly for bankruptcy or orderly liquidation. The concept underpinning the Dodd-Frank Act is that shareholders and private creditors must bear all losses and costs without any contribution from taxpayers. Closer to home, in the 90s, Sweden, Norway and Finland responded to the crisis in their banking system by having the shareholders also bear the cost of the operation. The fundamental philosophy behind these state interventions is based on three principles. First of all, the aim of the operations was to rescue the financial system and not any particular bank. In such a case, it was preferable to officially acknowledge and record bankruptcy instead of continually bailing out a non viable bank like Dexia. Secondly, shareholders were to be made to absorb the greatest costs. Thirdly, the Board of Directors and the management responsible for the bank’s failure were obliged to resign |1|
So, there are alternatives available. The only thing missing is political determination. However, the situation could change. Legal action like those launched in Belgium against the Dexia guarantees, as well as those taken against banks by Spain, France, and Ireland, among others, must be made known to the general public in order to build a wide social movement to ensure true public control of the banks and to enable a citizen audit of the debt so as to identify and cancel the illegitimate part such as the sums invested to bail out the banks. With that in mind, the CADTM is organising a European conference in Brussels, on 24 November, on building resistance to the banks and on available alternatives |2|

Signatories and members of the Support Committee:

The complete list of the Committee members can be found at: http://sauvetage-dexia.be/spip.php?...

|2| 2. More infos on CADTM website http://cadtm.org/Agenda And, what if we stopped bankin