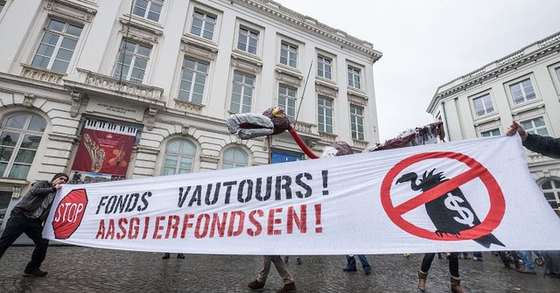 Demonstration in front of the Belgian Supreme Court in Brussels. Photo: Julien Bauwens.

Total victory for CADTM, Committee for the abolition of Illegitimate Debt, the CNCD – 11.11.11 and its Flemish counterpart represented by Oliver Stein from the chambers of the Progress Lawyers Network. Today 31 May 2018 the Belgian Supreme Court rejected the request brought by NML Capital Ltd seeking to overturn the act of law passed by the Belgian government on 12 July 2015 “relating to the struggle against Vulture Funds’ activities”  [1] thus confirming this law which is unique throughout the World. It is a victory for the peoples of the World in the face of a voracious profiteer of unregulated finance.

For Renaud Vivien, CADTM lawyer, who has been battling against vulture funds for over ten years, “this historic decision is the outcome, in Belgium, of a long legal and political struggle against vulture funds. It is a complete victory against NML Capital and its billionaire director, Paul Singer – a main donor to the US Republican Party – all his arguments were rejected by the court”.

To recall the background, Vulture Funds are financial societies who purchase debts of countries in financial difficulties, at bargain prices and then seek to recover the full nominal value plus interest and penalties. Making the most of poor countries’ financial distress, they make profits that can be between three and twenty times their original purchase price, that is between 300 and 2000%. [2]

It was to put an end to these speculative methods that have such a detrimental effect on the populations of indebted countries that the Belgian federal parliament legislated, in 2015, in order to prevent the Vulture Funds gaining from judgements in Belgian courts, more than the amount they initially paid out to purchase the debts of the country concerned. And that, even if courts in other countries had otherwise ruled in their favour.

Other States no longer have any excuses and should pass laws similar to the Belgian law.

In dismissing the claims of NML Capital, the Supreme Court give the green light to intensify the struggle against illegitimate creditors on the international level. As Renaud Vivien says, “countries no longer have any excuse and should pass laws similar to the Belgian law to end speculation on debts. Not only have the social movements against debt been calling for this but also has the European Parliament in its resolution of the 17 April 2018”. [3] This resolution calls on the states of the European Union to legislate against Vulture Fund speculation, inspired by the Belgian example.

The struggle against speculation on public debt must continue, including speculation on private debt where Vulture Funds make profits. In the same spirit, the new platform against Vulture Funds in Spain, that involves numerous organisations, attacks the investment funds that speculate in strategic sectors such as property and health and promises to struggle for the adoption of legislation similar to the Belgian law. Only a mobilisation of the population of this kind can stop Paul Singer, who, never satisfied, develops his position in Spain by buying the debt collection agency Gesif, in 2013, by buying doubtful issues of Bankia and Santander and taking a stake in Abertis motorways.

The fight against Vulture Funds must also continue everywhere there are countries having difficulties repaying debts. The countries over which speculative predators, are hovering.

• A short fiction film, 14 minutes, “Au festin des rapaces (A feast for Vultures)”, produced by the CADTM, the Théâtre Croquemitaine and Chemins de traverse, is used as a tutorial support in the campaign against Vulture Funds. Currently being sub-titled in English, the French version is available here: http://www.cadtm.org/Au-Festin-des-Rapaces,15858
• A petition to support the Belgian law and encourage similar laws throughout the World: here.
• An issue of AVP (Autres Voix de la Planète n°73), the CADTM half-yearly magazine devoted to the question of Vulture Funds. Available (in French) here Fonds vautours : les ailes de la dévastation. A chapter in Spanish is available here.
• Also see our brochure (in French only) La Belgique donnée en festin aux fonds vautours : Organisons la contre-attaque ! may be downloaded free or ordered if several copies are required for distribution.

[1] Law against the activities of Vulture Funds.