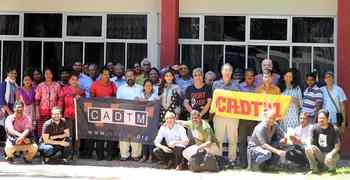 We, the participants of the 7th CADTM South Asia workshop from Bangladesh, Nepal, India, Pakistan, Sri Lanka, Japan as well as from Belgium and France gathered at Colombo, Sri Lanka from 6-8 April 2018 acknowledge and affirm that illegitimate debt is a mechanism used to transfer wealth created by toilers to the benefit of capitalists and other exploiting classes. We also declare that public debt (both external and internal) involves a massive transfer of wealth from the peoples of the South and the North to the creditors, while the local dominant classes have their cut in the transfer.

We resolve that we will carry on the fight against the capitalist system that creates, exacerbates and sustains inequalities around the region and around the planet. The capitalists see both nature and human beings as commodities to be exploited and traded for the maximisation of their profit. The capitalist system perpetuates and strengthens all social oppressions including patriarchy, racism, casteism, ultra-nationalism, religious fundamentalism and others. This system uses debt not only as a tool for economic subjugation but also for political domination. In fact, capitalism walks hand in hand with the debt system.

Private indebtedness has developed as the states, crawling under public debt and implementing their neoliberal agenda, have abandoned the funding of social services and their obligation to make sure that the basic needs of the people are met. We demand the cancellation of all forms of illegitimate debt – public and private including microcredit debt, peasant debt, student debt, household mortgage debt and others.

Microcredit, which was and still is presented as the solution to get people out of poverty, has had disastrous effects on poor populations in the Global South. With its abusive interest rates and conditions, it plunged these people in a debt trap, forcing them to contract multiple loans to pay back for the former ones, and to make huge sacrifices to reimburse them over years and decades. We are aware that women are by far the primary victims of microcredit and we express our solidarity with their struggles against microcredit in Sri Lanka – such as the protest which was held in February 2018 in Jaffna –, as well as in Bangladesh and all other parts of the world.

We shall struggle against all predatory lending, investment and trade agreements that plunge the ordinary people into a vicious circle of austerity, unemployment and poverty – be these agreements coming from International Financial Institutions, from Global North powers or from emerging powers such as China and India, whose policies have important negative outcomes in South Asia. We demand an end to all sorts of illegitimate lending by the governments, International Financial Institutions, Multilateral Development Banks and others that destroys lives, devastates livelihoods and ruins nature.

We believe that public debt is not bad in itself. Governments can contract loans to finance the ecological transition, to replace fossil energies with renewable energies that respect the environment, to finance land reform, to drastically reduce road and air transport and replace them with collective transport, to finance the creation of decent jobs for all, to guarantee decent public services for all and to guarantee the respect of fundamental human rights of everyone. Public borrowing can thus be legitimate if it is used to finance legitimate projects and if those who contribute act in a legitimate way.

We call for an audit of the debt involving the social movements and the toiling masses to identify parts of public debt are illegal, illegitimate, odious, or simply unsustainable. Ordinary people must have the necessary knowledge and power to stop the payment of illegitimate debt and repudiate the latter.

We demand transparency and accountability of all projects financed by overseas lenders and IFIs in South Asia. All such projects should be brought under democratic oversight. The respective parliaments of the countries must ratify the agreements before they are implemented.

We strive for alternative possibilities like subsidies and grants, zero interest loans without discrimination, socially and collectively managed community projects, etc. We call for the renewed development of free, high quality, public services and increases in the funds available for social spending.

Let us unite in our struggles against the illegitimate debt system, free trade agreements that humiliate and exploit the people, plunder and destroy the environment, push whole populations onto penury and destitution.

We extend our solidarity to all labouring masses caught in the infernal webs of illegitimate debts. We resolve to continue our struggle as long as human beings labour under the burden of the debt system, and the financial and microcredit institutions.