Tunisia: “The promised economic miracle never happened” – A continuation of the uprisings of 2011 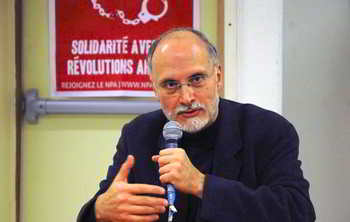 For the specialist of the Arab world Gilbert Achcar, the Tunisian revolt was “foreseeable”. And it is a continuation of the uprisings of 2011.

Originally from Lebanon, which he left in 1983 for Paris, Berlin and now London, at the School of Oriental and African Studies, where he is professor of international and political relations, Gilbert Achcar has been observing the upheavals of the Arab world for two decades. The author of The People Want: A Radical Exploration of the Arab Uprising (London, SAQI, 2013) and Morbid Symptoms: Relapse in the Arab Uprising (London, SAQI, 2016) takes a Marxist approach to the analysis of the uprisings of 2011. According to him, the current protests are a logical extension of them.

CÉLIAN MACE AND HALA KODMANI – How do you analyse this new Tunisian revolt?

GILBERT ACHCAR – It was quite predictable. Because all the ingredients of the 2010-2011 explosion are still there. Some factors, such as youth unemployment, have even worsened. In the last two years we have seen localized eruptions occurring all over the place, in small towns in Tunisia and in neighbouring countries. These are the beginnings of a second wave of regional protest. In Morocco, anger has been rising since last year. In Sudan, there has been a protest movement of unprecedented magnitude since the beginning of the year. Even Iran has had a social revolt. All these events have as common denominator the implementation of the measures recommended by the IMF: the reduction of public expenditure, the reduction of the number of civil servants, the abolition of subsidies on fuel or basic commodities, etc.

Why does Egypt, which applies these same measures, remain silent?

Because it is coming out of a terrible repression. Al-Sisi maintains a climate of terror. People are confronted with a catastrophist discourse, they are told that in the event of a revolution, their country will turn into Syria or Libya. But this threat only works for a while. It is not impossible that the Egyptian people will succeed in overcoming this paralysis. The fear of a scenario like Syria is not a dissuasive argument in itself, except in the face of a very brutal power that can carry out a massacre. Fortunately this is not the case in Tunisia. The social discontent is stronger than anything else. Repression can stifle movements, but it doesn’t solve anything. All it does is postpone the problems.

In 2011, the Arab Spring combined social anger and democratic aspirations. The political demands, this time, seem to have been relegated to a secondary role...

The explosion has always been social and political. From the moment a social movement takes on a certain magnitude, it inevitably becomes political. But it takes a variety of forms. In the time of Ben Ali, the protest was aimed at the overthrow of the dictatorship. Today, the discontent is more social because there is a political vacuum. The Tunisian left has jumped on the bandwagon to present itself as the leader of the protest, but the disappointment of the youth regarding the parties is obvious. The General Union of Tunisian Workers (UGTT) could have played this role, but the Union did not fulfil its function of counter-power, it rather sought accommodation with the government. In Tunisia, however, the trade union movement is historically powerful and, at the grassroots level, has a real autonomy with regard to government. It was a unique case in the region. The unfortunate thing is that this force, instead of pushing strongly towards a radically different socio-economic policy, has made the choice of concertation and compromise. As a result, the UGTT has now been overtaken by events. 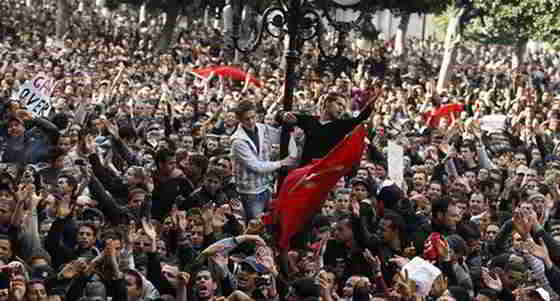 Things have not advanced quickly enough since the revolution?

The Revolution of 2011 was a revolution of the young... and it produced the oldest president in the world (Béji CaÏd Essebsi is 91 years old).There’s something wrong! Without even talking about age, he is a man of the old regime, who applies the same methods, with the same circles as in the past. With Ben Ali, the Tunisians eliminated the tip of the iceberg. No one is fooled in Tunisia: the old regime is back. People only wanted to see a peaceful and successful revolution, but there are obvious symptoms of a deep malaise in Tunisia. It is the country in the region that has the greatest number of young people engaged with the Islamic State, for example!

Why has Tunisia failed for years to reduce unemployment?

The IMF retains the mastery of the broad economic guidelines. However, these guidelines allowed the development of the conditions of the explosion of 2011. The IMF has timidly made its mea culpa, but has not changed anything fundamental. Since 2011, there have been even more restrictive austerity directives, drastic reduction of public expenditure, support for the private sector... Tunisia did it, Egypt did it, Iran is doing it. But from these shock therapies, the populations have had only the shock and not the therapy! The promised economic miracle never happened. This can only cause frustration, and an explosion.

Should other eruptions be expected in the coming months?

What was called “Spring” in 2011, imagining that it would be a passing phase, is in reality a revolutionary process of long duration, with ups and downs, accelerations, confrontation, sometimes even civil wars... There will be no stability in the region in the medium term as long as socio-economic policies are not radically altered.

INTERVIEW WITH GILBERT ACHCAR BY CÉLIAN MACE AND HALA KODMANI

This interview was first published in the French daily Libération on January 14, 2018. Translation IVP: http://www.internationalviewpoint.o...