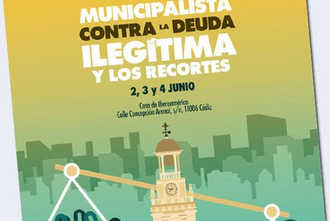 The Municipal Network Against Illegitimate Debt and Fiscal Cuts is expanding to the level of the autonomous regions [the Spanish State consists of 12 autonomous communities, among which Andalusia, Catalonia, the Basque country, the Madrid community…] stated Carmen Lizárraga, a Podemos member of the Parliament of Andalusia, at the opening press conference of the second meeting of the Network, which brought together in Cadiz, on 2, 3 and 4 June 2017, over 150 participants representing 77 municipalities from all over Spain. Members of the Parliaments of the autonomous Communities of Andalusia, Navarre, the Baleares, Estremadura and Galicia had a separate meeting that resulted in the decision to meet more frequently and in a more structured way after the summer recess.

Doing away with the illegitimate debt at the municipal, regional and national levels is part and parcel of the Network. The Oviedo Manifesto, which was signed by over one thousand elected representatives (among whom municipal councillors, MPs and MEPs, joined by social activists and international key figures) who committed to support the establishment of a Spanish association of municipalities, autonomous communities and nationalities that question illegitimate debt and work towards its abolition. The meeting in Cadiz was a step in that direction.

Over the last weeks, 13 municipalities that are members of the Network (Gijón, Laviana, Torres de la Alameda, Morón de la Frontera, Getxo, Vilassar de Mar, Santa Coloma de Gramanet, Loeches, Valdemoro, Amurrio, Jerez, Petrer and Leioa) voted motions against the Additional Provisions in the General State Budgets as presented by Finance Minister, Cristóbal Montoro that prevent remunicipalization of services. A motion voted by the Parliament of Navarre and a proposal by the Parliament of Aragan were added to the municipalities’ protests.

Eric Toussaint, spokesperson for the Committee for the Abolition of Illegitimate Debts (CADTM), who took part in the meeting, said it was “essential to now reach the level of involving autonomous Communities. If the network should stay at the municipal level without reaching out to the regions both in terms of political parties and of social movements, we would soon be in a dead-end. To achieve a solution we have to be able, and willing, to face up to the Central Government”.

Similarly during the press conference Carlos Sánchez Mato, in charge of economy and Finance for the city of Madrid, expressed the need to work together in a coordinated way otherwise there is no hope of winning.

Mato recalled the ground that had been covered between the Indignados movement in 2011 and the establishment of municipal governments aiming at change in about a hundred municipalities thanks to victories in the municipal elections in May 2015 and pointed out the difference between Cadiz run by Teófila Martínez (former PP mayoress) or by ‘Kichi’ (the nickname given to the current Podemos party mayor - Por Cádiz Sí Se Puede), and indeed between Madrid run by Manuela Carmena (of the progressive coalition Ahora Madrid) or by Esperanza Aguirre (PP) the previous mayor.

“Wherever we are in positions of power we have to go beyond the legal framework. Madrid is fighting a hard battle against Montoro. We have to fight it and we shall win it. Because their unfair laws are ineffective to enforce their absurd measures.”

Eric Toussaint underlined the significance of the Network, which is unprecedented whether in Spain or on the international scene. He added that the current challenge is to achieve the alchemy through which social movements and elected representatives join forces. Many of those representatives used to be active in the social movements. Another challenge he mentioned is for the front to tip the balance of power with the government. It is one thing to be in the Madrid town hall confronting Montoro and another to be in one of the small municipalities under the threat of cuts such as in Puerto Real or Cadiz. Hence the need for a solidarity front.

In the opening session Fátima Pontones, in charge of the finance department for Puerto Real, a municipality currently caught in the vice of debt, exposed the perversion of a system that forbids direct employment but supports privatization of services. She called for disobedience on the part of citizens. She also criticized the ICO loans that turned a commercial debt into a financial debt and the obligation, through the modified article 135 of the Constitution to give payments to banks the first priority.

Maria Rozas, who is in charge of the Finance department for Santiago de Compostela, exposed the Montoro law as being more concerned with investors’ security than with the 26,000 people threatened by poverty in her city. She concluded on the necessity of standing up against the law and the investors.

Kichi launched a citizen audit of the debt in Cadiz

Other good news marked the beginning of this meeting in Cadiz, held in the wake of the meeting in Oviedo last November. The mayor of Cadiz, José María González ‘Kichi’, announced that a citizen audit of the debt in Cadiz would start in September. One of its objectives is to show how public money is used. There is less waste when things are monitored he said. He was confident that collective learning is essential to avoid the mistakes of the past. Let us remember that in 2013, like many other municipalities, Cadiz contracted loans at 5.95 % interest rate while the banks granting those loans received the funds from the ECB at 0.25 %.

The mayor of Cadiz gave another evidence of this commitment to citizen participation when he left the opening panel to join in a sit-in, in his childrens’ school, to defend public education.
A clear wish to carry on this kind of networking resulted in the decision to hold a third meeting in Rivas Vaciamadrid, 15 kilometers from Madrid next November.