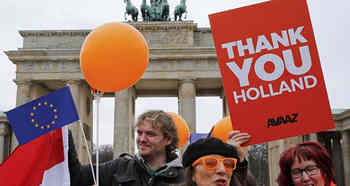 This is ridiculous. Avaaz is circulating a petition to thank the "Dutch people" (whoever that may be) for "choosing hope, unity, and dialogue over hate, fear and old fascist rhetoric." They even claim that, "by rejecting Geert Wilders you've helped stop the rise of the far right everywhere." More generally, the coverage of these elections in the international press has been a complete disaster.

So: a quick note to my international friends, just to make sure that you all know what IS going on in the Netherlands, at the moment.

First of all: to my great regret, the Dutch voters did NOT reject Geert Wilders. He actually GAINED five seats in parliament. It is true that, for a long time, polls predicted that he would win a much greater number of votes (and possibly even win the elections). Instead, Wilders' PVV came in second. But his power in parliament did increase, and so it's a grave exaggeration to state that he was 'rejected.'

Second, the reason why Wilders won less seats than expected, is because the right-liberal VVD (which is led by prime minister Mark Rutte) has largely adopted Wilders' racist and islamophoc discourse. The recent conflict with the Turkish government also helped Rutte to present himself as a 'tough' leader who is willing to make controversial decisions at the expense of cultural (/islamic) minorities in the Netherlands. More generally, during its electoral campaigns the VVD has tried to promote itself as a more benign and more competent alternative to Wilder's populist party. But its views on migration, cultural diversity, systemic racism, or the current refugee crisis are hardly more progressive or inclusive than Wilders'. The VVD has closely collaborated with the PVV in the past (did I mention that Wilders was one of the VVD's most prominent MP's, before he left to found his own party?), and I'm sure that they will do so again in the future, whenever it serves their interests. So, again, Rutte's electoral victory can hardly be read as a 'rejection' of the PVV.

Finally, many international media have failed to notice that the parliamentary left now has reached an all time low. All leftist parties combined (and I'm using the term 'left' in the broadest possible sense) have only 46 seats (out of 150). Most significantly, the social-democratic PvdA (which has always been one of the major parties since WWII), has lost 29 seats. The socialists have lost one as well. The Greens gained a significant number of seats (they went from 4 to 14), but that is much less than all left parties combined have lost. Also, it should be noticed that Wilders' popularity has led to the rise of various other, extreme-right parties. One of them - Thierry Baudet's "Forum for Democracy" - has won two seats as well.

In short, the Dutch Parliament has never been more rightwing, nationalist, and racist than it is today. There is very little reason to celebrate - let alone to thank the "Dutch people" for "choosing hope, unity, and dialogue." What we need, in the coming years, is a militant, extra-parliamentary opposition. And not stupid petitions celebrating yet another victory of the neoliberal right.