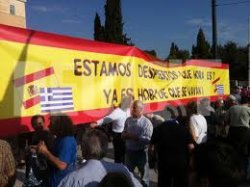 Two weeks after it started the Greek movement of ‘outraged’ people has the main squares in all cities overflowing with crowds that shout their anger, and makes the Papandreou government and its local and international supporters tremble. It is now more than just a protest movement or even a massive mobilization against austerity measures. It has turned into a genuine popular uprising that is sweeping over the country. An uprising that makes it know at large its refusal to pay for ‘their crisis’ or ‘their debt’ while vomiting the two big neoliberal parties, if not the whole political world in complete disarray.

How many were there on Syntagma square (Constitution square) in the centre of Athens, just in front of the Parliement building on Sunday 5 June 2011? Difficult to say since one of the characteristic features of such popular gatherings is that there is no key event (speech or concert) and that people come and go. But according to people in charge of the Athens underground, who know how to assess the numbers of passengers, there were at least 250,000 people converging on Syntagma on that memorable night! Actually several hundreds of thousands of people if we add the ‘historic’ gatherings that took place on the main squares of other Greek cities (see map).

At this juncture we should however raise the question: how can such a mass movement that is shaking the Greek government (in which the EU has a particular interest) not be mentioned at all in Western medias? For these first twelve days there was virtually not a word, not an image of those unprecedented crowds shouting their anger against the IMF, the European Commission, the ‘Troika’ (IMF, European Commission, and European Central Bank), and against Frau Merkel and the international neoliberal leaders. Nothing. Except occasionally a few lines about ‘hundreds of demonstrators’ in the streets of Athens, after a call by the Greek trade unions. This testifies to a strange predilection for scrawny demos of TU bureaucrats while a few hundred yards further huge crowds were demonstrating late into the night for days and weeks on end. 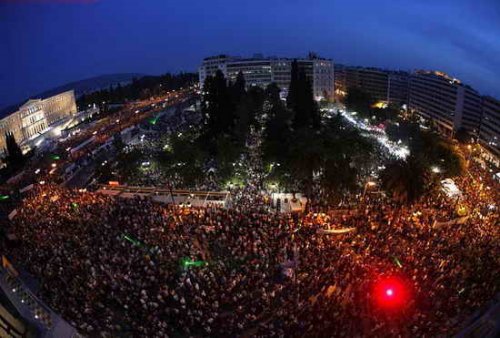 This is indeed a new form of censorship. A well-organized political censorship motivated by the fear this Greek movement might contaminate the rest of Europe! Confronted as we are with this new weapon used by the Holy Alliance of modern times, we have to respond together both to expose this scandal and to find ways of circumventing such prohibition to inform public opinions, through developing communication among social movements throughout Europe and at once creating and reinforcing our own alternative media…

Going back to the Greek ‘Outraged’, or ‘Indignés’ or Aganaktismeni, we have to note that the movement is getting more and more rooted among lower classes against a Greek society that has been shaped by 25 years of an absolute domination of a cynic, nationalist, racist and individualist neoliberal ideology that turned everything into commodities. This is why the resulting image is often contradictory, mixing as it does the best and the worst among ideas and actions! For instance when the same person displays a Greek nationalism verging on racism while waving a Tunisian (or Spanish, Egyptian, Portuguese, Irish, Argentinian) flag to show his internationalist solidarity with those peoples. 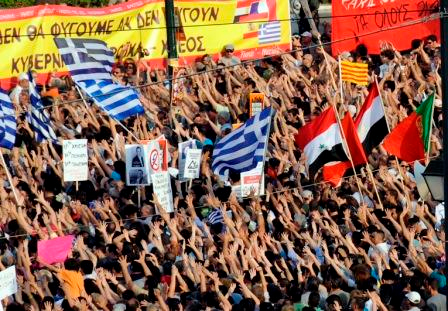 Should we therefore conclude that those demonstrators are schizophrenic? Of course not. As there are no miracles, or politically ‘pure’ social uprisings, the movement is becoming gradually more radical while still branded by those 25 years of moral and social disaster. But mind: all its ‘shortcomings’ are subsume into its main feature, namely its radical rejection of the Memorandum, of the Troika, the public debt, the government, austerity, corruption, a fictional parliamentary democracy, the European Commission, in short of the whole system!

It is surely not by chance if for the past two weeks demonstrators shout such phrases as ‘We owe nothing, we sell nothing, we pay nothing’, ‘We do not sell or sell ourselves’, ‘Let them all go, Memorandum, Troika, government and debt’ or ‘We’ll stay until they go’. Such catchwords do unite all demonstrators as indeed all that is related to their refusal to pay for the public debt.[2] This is why the campaign for an audit Commission of the public debt is a great success throughout the country. Its stall in the middle of Syntagma square is constantly besieged by a crowd of people eager to sign the call or to offer their services as voluntary helpers…[3]

While they were first completely disorganized the Syntagma Aganaktismeni have gradually developed an organization that culminates in the popular Assembly held every night at 9 and drawing several hundreds speakers in front of an attentive audience of thousands. Debates are often of really great quality (for instance on the public debt), actually much better than anything that can be seen on the major television channels. This in spite of the surrounding noise (we stand in the middle of a city with 4 million inhabitants), dozens of thousands of people constantly moving, and particularly the very diverse composition of those huge audiences in the midst of a permanent encampment that looks at times like some Tower of Babel.

All the qualities of direct democracy as experimented day after day on Syntagma should not blind us to its weaknesses, its ambiguities or indeed its defects as its initial allergy to anything that might remind of a political party or a trade union or an established collectivity. While it has to be acknowledged that such rejection is a dominant feature among the Aganaktismeni, who tend to reject the political world as a whole, we should note the dramatic development of the Popular Assembly, both in Athens and in Thessaloniki, that shifted from a rejection of trade unions to the invitation that they should come and demonstrate with them on Syntagma.

Obviously, as days went by, the political landscape on Syntagma square clarified, with the popular right and far right located in the higher section, in front of Parliament, and the anarchist and radical left on the square itself, with control on the popular assembly and the permanent encampment. Of course, though the radical left is dominant and tinges with deep red all events and demonstrations on Syntagma, this does not mean that the various components of the right, from populist, to nationalist, to racist and even neonazi, do not further attempt to highjack this massive popular movement. They will endure and it will very much depend on the ability of the movement’s avant-garde to root it properly in neighbourhoods, workplaces and schools while defining clear goals that throw bridges between huge immediate needs and a vindictive outrage against the system.

While fairly different from the similar movement in Spain through its dimensions, its social composition, its radical nature and its political heterogeneity, the movement on Syntagma shares with Tahrir square in Cairo and Puerta del Sol in Madrid the same hatred against the economic and political elite that has grabbed and emptied of any significance bourgeois parliamentary democracy in times of arrogant and inhuman neoliberalism. The movement is stirred by the same non violent democratic and participative urge that is to be found in all popular uprisings in the early 21st century.

Our conclusion can only provisional: whatever is to come (and the consequences may be cataclysmic), the current Greek movement will have marked a turning point in the history of the country. From now on everything is possible and nothing will ever be the same again.