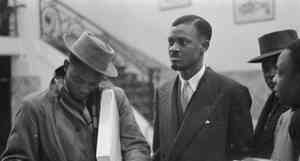 Patrice Lumumba was prime minister of a newly independent Congo for only seven months between 1960 and 1961 before he was murdered, fifty-six years ago today. He was thirty-six.

Yet Lumumba’s short political life — as with figures like Thomas Sankara and Steve Biko, who had equally short lives — is still a touchstone for debates about what is politically possible in postcolonial Africa, the role of charismatic leaders, and the fate of progressive politics elsewhere.

The details of Lumumba’s biography have been endlessly memorialized and cut and pasted: a former postal worker in the Belgian Congo, he became political after joining a local branch of a Belgian liberal party. On his return from a study tour to Belgium arranged by the party, the authorities took note of his burgeoning political involvement and arrested him for embezzling funds from the post office. He served twelve months in prison.

Congolese historian Georges Nzongola-Ntalaja — who was in high school during Lumumba’s rise and assassination — points out that the charges were trumped-up. Their main effect was to radicalize him against Belgian racism, though not colonialism. Upon his release in 1958, Lumumba, by now a beer salesman, was more explicit about Congolese autonomy and helped found the Congolese National Movement, the first Congolese political group which explicitly disavowed Belgian paternalism and tribalism, called unreservedly for independence, and demanded that Congo’s vast mineral wealth (exploited by Belgium and Euro-American multinational firms) benefit Congolese first.

For Belgian public opinion — which played up Congolese ethnic differences, infantilized Africans, and in the late 1950s still had a thirty-year plan for Congolese independence — Lumumba and the Congolese National Movement’s pronouncements came as a shock.

Two months after his release from prison, in December 1958, Lumumba was in Ghana, at the invitation of President Kwame Nkrumah who had organized the seminal All Africa People’s Conference. There, as a number of other African nationalists pushing for political independence listened, Lumumba declared:

The winds of freedom currently blowing across all of Africa have not left the Congolese people indifferent. Political awareness, which until very recently was latent, is now becoming manifest and assuming outward expression, and it will assert itself even more forcefully in the months to come. We are thus assured of the support of the masses and of the success of the efforts we are undertaking.

The Belgians reluctantly conceded political independence to the Congolese, and two years later, following a decisive win for the Congolese National Movement in the first democratic elections, Lumumba found himself elected to prime minister and with the right to form a government. A more moderate leader, Joseph Kasavubu, occupied the mostly ceremonial position of Congolese president.

On June 30, 1960, Independence Day, Lumumba gave what is now considered a timeless speech. The Belgian king, Boudewijn, opened proceedings by praising the murderous regime of his grandfather, Leopold (eight million Congolese died during his reign from 1885 to 1908), as benevolent, highlighted the supposed benefits of colonialism, and warned the Congolese: “Don’t compromise the future with hasty reforms.” Kasavubu, predictably, thanked the king.

Then Lumumba, unscheduled, took the podium. What happened next has become one of the most recognizable statements of anticolonial defiance and a postcolonial political program. As the Belgian writer and literary critic Joris Note later pointed out, the original French text consisted of no more than 1,167 words. But it covered a lot of ground.

The first half of the speech traed an arc from past to future: the oppression Congolese had to endure together, the end of suffering and colonialism. The second half mapped out a broad vision and called on Congolese to unite at the task ahead.

Most importantly, Congo’s natural resources would benefit its people first: “We shall see to it that the lands of our native country truly benefit its children,” said Lumumba, adding that the challenge was “creating a national economy and ensuring our economic independence.” Political rights would be reconceived: “We shall revise all the old laws and make them into new ones that will be just and noble.”

Congolese congressmen and those listening by radio broke out in applause. But the speech did not sit well with the former colonizers, Western journalists, nor with multinational mining interests, local comprador elites (especially Kasavubu and separatist elements in the east of the country), the United States government (which rejected Lumumba’s entreaties for help against the reactionary Belgians and the secessionists, forcing him to turn to the Soviet Union), and even the United Nations.

These interests found a willing accomplice in Lumumba’s comrade: former journalist and now head of the army Joseph Mobutu. Together they worked to foment rebellion in the army, stoke unrest, exploit attacks on whites, create an economic crisis — and eventually kidnap and execute Lumumba.

The CIA had tried to poison him, but eventually settled on local politicians (and Belgian killers) to do the job. He was captured by Mobutu’s mutinous army and flown to the secessionist province of Katanga, where he was tortured, shot, and killed.

In the wake of his murder, some of Lumumba’s comrades — most notably Pierre Mulele, Lumumba’s minister of education — controlled part of the country and fought on bravely, but was finally crushed by American and South African mercenaries. (At one point Che Guevara traveled to Congo on a failed military mission to aid Mulele’s army.)

That left Mobutu, under the guise of anticommunism, to declare a one-party, repressive, and kleptomanic state, and govern, with the consent of the United States and Western governments, for the next thirty-odd years.

In February 2002, Belgium’s government expressed “its profound and sincere regrets and its apologies” for Lumumba’s murder, acknowledging that “some members of the government, and some Belgian actors at the time, bear an irrefutable part of the responsibility for the events.”

A government commission also heard testimony that “the assassination could not have been carried out without the complicity of Belgian officers backed by the CIA, and it concluded that Belgium had a moral responsibility for the killing.”

Lumumba today has tremendous semiotic force: he is a social media avatar, a Twitter meme, and a font for inspirational quotes — a perfect hero (like Biko), untainted by any real politics. He is even free of the kind of critiques reserved for figures like Fidel Castro or Thomas Sankara, who confronted some of the inherent contradictions of their own regimes through antidemocratic means.

As such, Lumumba divides debates over political strategy: he is often derided as a merely charismatic leader, a good speaker with very little strategic vision.

For example, in the famed Belgian historical fiction writer David van Reybrouck’s much-praised Congo: An Epic History of a People, Lumumba is characterized as a poor tactician, unstatesmanlike, and more interested in rebellion and adulation than governance. He is faulted for not prioritizing Western interests.

Lumumba’s denunciation of the Belgian king in June 1960, for example, only served to embolden his enemies, argues Van Reybrouck. Lumumba is also criticized by his Western critics for turning to the Soviet Union after the United States had spurned him.

But as the writer Adam Shatz has argued: “It’s not clear how . . . in his two and a half months in office, Lumumba could have dealt differently with a Belgian invasion, two secessionist uprisings, and a covert American campaign to destabilize his government.”

More powerful perhaps is how Lumumba operates unproblematically as a figure of defiance. As the disappointment with national liberation movements in Africa (in particular, Algeria, Angola, Zimbabwe, Mozambique, and more recently South Africa’s African National Congress) sets in, and new social movements (#OccupyNigeria, #WalktoWork in Uganda, the more radical #FeesMustFall and struggles over land, housing, and health care in South Africa) begin to take shape, references to and images of Patrice Lumumba serve as a call to arms.

In Lumumba’s native Congo, ordinary citizens are currently fighting President Joseph Kabila’s attempts to circumvent the constitution (his two terms were up in December, but he refused to step down). Hundreds have been killed by the police and thousands arrested. Kabila, who inherited the presidency from his father, who overthrew Mobutu, exploits the weakness of the opposition, especially the power of ethnicity (via patronage politics) to divide Congolese politically. In this, Kabila is merely emulating the Belgian colonists and Mobutu.

Here Lumumba’s legacy may be helpful. Lumumba’s Congolese National Movement was the only party offering a national — rather than ethnic — vision and a means to organize Congolese around a progressive ideal. Such a movement and such politicians are in short supply in Congo these days.

But Lumumba’s story offers not just an invitation to revisit the political potential of past movements and currents, but also opportunities to refrain from projecting too much onto leaders like Lumumba who had a complicated political life and who did not get to confront the messiness of postcolonial governance. It also means treating tragic political leaders as humans. To take seriously political scientist Adolph Reed Jr’s advice about Malcolm X:

He was just like the rest of us — a regular person saddled with imperfect knowledge, human frailties, and conflicting imperatives, but nonetheless trying to make sense of his very specific history, trying unsuccessfully to transcend it, and struggling to push it in a humane direction.

It is perhaps then that we can begin to make true Patrice Lumumba’s critical wish, perhaps as self reflection, that he wrote in a letter from prison to his wife in 1960:
The day will come when history will speak. But it will not be the history which will be taught in Brussels, Paris, Washington or the United Nations. It will be the history which will be taught in the countries which have won freedom from colonialism and its puppets. Africa will write its own history and in both north and south it will be a history of glory and dignity.

Sean Jacobs: ounded and is chief editor of Africa is a Country and on the international affairs faculty of The New School.