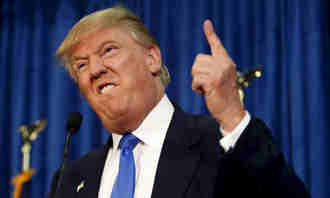 If the very worst happens, it won’t be because we didn’t know that it might happen. We have all been amply warned.

- We’ve been warned of the many disturbing parallels between Donald Trump and Hitler.

- We’ve been warned that the rise of Trump resembles the rise of other authoritarian populist demagogues.

- We’ve been warned—by Donald Trump himself—that he plans to implement incredibly broad rules blocking Muslims from entering America, and that he views a Muslim registry or “watch list” as a wise idea.

- We’ve been warned that Trump will usher in a new age of white nationalism, which will evolve to quasi-respectable mainstream status with his blessing, silent or otherwise.

- We’ve been warned that Trump has unprecedented conflicts of interest that will call into question the integrity of nearly everything he does in the White House if he doesn’t completely rid himself of his business, which he will not.

- We’ve been warned that the free press, squeezed by public opinion and by government pressure, will tend to grow weaker and will by its nature normalize the actions of a Trump administration no matter how shocking those actions may have appeared to be just a few years before.

- We’ve been warned that despite facile promises to “Drain the Swamp,” Trump is stocking his administration with donors, Wall Street insiders, and billionaires, and has given every indication that he and his loyalists will embrace cronyism and corruption with a fervor not seen in decades.

- We’ve been warned that, despite inheriting one of the strongest economies of any president in modern history, Donald Trump will lie, dissemble, and change standards without compunction in order to declare that he is “making America great again,” statistics be damned.

- We’ve been warned that Trump’s penchant for involving himself directly in corporate decisions will enable corporations to extort money from the government as a matter of course.

- We’ve been warned that Trump’s impulsive use of Twitter can erase billions of dollars in value and potentially spark economic or political crises instantaneously and without warning.

- We’ve been warned that Trump’s coziness with brutal foreign leaders who despise human rights, aggression towards China, hostility towards Palestine, general lack of knowledge of world affairs, and thin-skinned temperament could upend the global order and set off any number of unpredictable international conflicts up to and including war.

So when it happens, don’t act surprised.