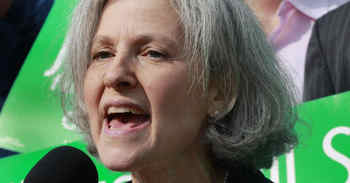 The Green Party’s likely presidential nominee, Jill Stein, penned an open letter to Californians on Friday calling for “All hands on deck!” In an unprecedented call to action that, if acted upon, could significantly cost the Green Party votes in November, Jill Stein told all Californians who are currently registered to vote as “No Party Preference” or “Democrat” to cast their vote for Bernie Sanders in the June 7 primary.

“California voters have a chance to put us on the road to revolutionary change in the June 7 primary,” Stein wrote. “At this historic moment, as voters reject the Clinton and Trump campaigns with record high levels of dislike and mistrust, I ask not just for your vote for me, but also for your vote for Bernie. These votes are powerfully synergistic as we build an historic grassroots movement and a political vehicle to carry it forward.”

“If you are registered as a Democrat or as ‘No Party Preference’,” Stein wrote, “please vote for Bernie in the Democratic primary.”

Stein says that the Bernie Sanders campaign has put up a “valiant fight, despite the shameless assault by the Democratic Party.” Stein pointed out the powerful shadow that superdelegates have cast on the election from the very beginning, election irregularities, manipulated conventions, stifled debates, and dishonest reporting from the mainstream media as the reasons why Bernie Sanders has even had to fight for votes this primary and caucus season.

“Still, the battle is not over. The Democratic nomination is in contention. The more the Sanders team can raise the bar for the people not the billionaires, the stronger we will all be for it,” Stein wrote. “I urge you to reject the propaganda of powerlessness peddled by the corporate pundits and party operatives of the liberal elite. They tell us all – Berners and Greens alike – we must rally around Hillary Clinton as the lesser evil alternative to Donald Trump.”

Stein says that the pundits should know better than to try to manipulate the voters. She blames Clinton’s own “neoliberal policies” for Trump’s current success.

“Five million families were cheated out of their homes, nine million jobs destroyed, and this low wage economy is still on the rocks. Another Clinton in the White House will only create more economic despair fanning the flames of right wing extremism. And with the Clintons’ record of service to fossil fuel giants and war profiteers, it’s not just the economy that’s at stake here. Sure there are differences between Trump and Clinton, but not enough to save your job, your life, or the planet.”

Stein says that it’s Senator Sanders, not Hillary Clinton, who shows any significant chance of beating Trump. Stein wrote that Hillary’s establishment insiders will tell Californians to vote against what they fear instead of what they actually believe in. She says that voting out of fear has so far delivered everything that left-leaning voters are afraid of.

“All the reasons we were told to vote for the lesser evil – because you didn’t want massive Wall Street bailouts, the offshoring of our jobs, the meltdown of the climate, the attack on immigrants and our civil liberties, the expanding prison state, endless war – that’s exactly what we’ve gotten because we allowed ourselves to be silenced.”

Stein also offered a future solution to the powerful control gained to the establishment through the use of vote splitting fears, which have historically strong armed Americans into voting for a candidate in a major party.

“In fact, the problem of vote splitting could be solved with the stroke of a pen with Ranked Choice Voting, which is used in cities around the nation. California and other state legislatures could pass it right now and avoid any ‘spoiling’ of the presidential election. But the machine Democrats have refused to consider such bills because they rely on fear to coerce your vote. That in itself tells you they’re not on your side, and do not deserve your vote.”

Stein says that Bernie is proving that most Americans want a campaign that is independent of the billionaires. She wrote that the clock is ticking, and another Wall Street collapse, a newer, more expansive war, and a nuclear confrontation is imminent if people vote for Hillary Clinton.

“Together we can reject the lesser evil and fight for the greater good – like our lives depend on it, because they do,” Stein said.

In another example of voter manipulation, California Secretary of State Alex Padilla, a Hillary Clinton supporter and fundraiser, is overseeing a primary election in which No Party Preference voters are given ballots that lack the presidential candidates’ names on them, without any explanation for how they should proceed in order to acquire the proper ballot to vote in the Democratic primary Tuesday. Even worse, there are accusations that poll workers are erroneously being told to give independent voters provisional ballots instead of the cross-over ballots they are supposed to be given.

“I am currently reporting from Southern California, and there’s an Ashley Beck, who is a poll worker in conservative Orange County. She was being trained with other poll workers, and they were given some very strange information. In the California primary, the independent voters registered as NPP, or no party preference, can vote in the Democratic primary. They can ask for a ballot and they are allowed to vote. The Orange County poll workers were told if NPP voters ask for a Democratic Party ballot to vote for Bernie or Hillary, they are not to be given regular ballots, but provisional ballots. This shook up Ashley.”

Beck said that she was upset that all 18 poll workers were wrongfully told to give NPP voters provisional ballots, which are often not even included in the vote tallies, unless there is a demand. When a California citizens group, the Voting Rights Defense Project, sued on behalf of voters and asked a judge to order California to send voters the correct information for how NPP voters can vote in the Democratic primary Tuesday, Federal Judge William Alsup rejected the suit, and, according to the SF Gate, said, “The citizens of California are smart enough to know what their rights are.”

If Bernie Sanders should win the Democratic nomination, it would cost the Green Party votes in November. In another unprecedented political move, Jill Stein also recently told Senator Sanders to consider ditching his affiliation with the Democratic Party if the party doesn’t choose him as their nominee. The Green Party doesn’t hold their presidential nominating contest until after the Democratic convention, and should Sanders accept, he could get top billing on the Green Party ticket for the General Election, an election where independent voters, like all of the NPP voters in California, can vote without complications.

Jill Stein called the 2016 presidential election a “wildly unpredictable election where the old rules are giving way one by one.”