Ireland: The 1916 Easter Rising: Comrades of Ours – James Connolly and the Left at the Time 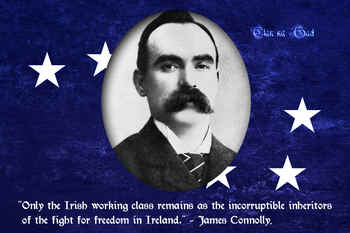 Geoffrey Bell writes about the Easter Rising and the response of the British left. His latest book, Hesitant Comrades, the Irish Revolution and the British Labour Movement, has just been published by Pluto Press.

Just before he was executed for his part in Ireland’s Easter Rising of 1916 James Connolly asked his daughter, Nora, if she had seen the socialist press. Nora was to report him as saying, “They will never understand why I am here. They forget I am an Irishman.”

The Easter Rising was when a group of armed men and women led by the Irish Republican Brotherhood and Connolly’s Irish Citizen Army proclaimed the formation of the Irish Republic at Dublin’s General Post Office. They were out to end British rule in the whole of Ireland. They had no popular mandate and were easily crushed by the British. Their leaders were executed, while the rank and file and suspected sympathisers were jailed without trial.

Both then and since many socialists have indeed wondered why Connolly was there: why an internationalist whose view was that what mattered was class not nation should throw in his lot with those who prioritised Ireland’s national struggle. Or, to bring the question up to date, why contemporary Marxists, socialists and feminists should join many others to the right of them in marking the hundredth anniversary of the Ireland’s Easter Rising, and say that those who participated were comrades of ours.

Certainly at the time, many on the left both in Britain and internationally had difficulty cheer-leading the Rising. The Scottish left-wing Forward, for which Connolly had written, called it, “madness, badness or both”, Labour Leader, the newspaper of the Independent Labour Party, which was left of although affiliated to the Labour Party, declared it would, “condemn as strongly as anyone those who were responsible for the revolt”. The Socialist, a newspaper of the Socialist Labour Party, of which Connolly was the first national secretary, made no comment on the Rising or Connolly’s role in it for a couple of years, so embarrassed was it by his participation. As for the Labour Party itself, one of its most prominent members, MP and trade union leader J.H. Thomas said, “There was no Labour leader in this country who did not deplore the recent rebellion in Ireland.” 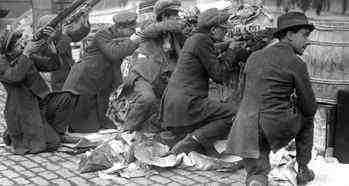 Of course this was at the time when Britain was a combatant in the Great War, an enlistment supported by both the Labour Party and the TUC; so they were always likely to react critically to the declaration of another war against them in Ireland. Moreover, while the Great War was not endorsed by all on the left most of those who did oppose it did so on pacifist grounds. Accordingly, they would hardly have been likely to offer solidarity to the Rising and its apparent militarism. And, by and large, they certainly did not: the left wing but pacifist George Lansbury declared in his newspaper Herald, “no lover of peace can do anything but deplore the outbreak in Dublin.”

There were exceptions to all of this. One such contrary example was the renowned suffragette and socialist Sylvia Pankhurst and her newspaper Woman’s Dreadnought. Writing in the immediate aftermath of the Rising, Pankhurst argued that, “justice can make but one reply to the Irish Rebellion and that is the demand that Ireland should be allowed to govern itself.” Although she went on to describe the Rising as “reckless”, she added that “their desperate venture was undoubtedly animated by high ideal”’. In concluding her article, she made clear her sympathies: “We understand why rebellion breaks out in Ireland and we share the sorrow of those who are weeping today for the Rebels whom the Government has shot.”

The following edition of Woman’s Dreadnought dug deeper. This was through an eye-witness account by a comrade of Pankhurst, Patricia Lynch, a young Irishwoman then living in England. Her long article, Scenes from the Irish Rebellion, was a marvellous piece of revolutionary reportage, based on Lynch’s own visits to Dublin and her interviews with other eye-witnesses, mainly working class women. She wrote of their sympathy for the Rising, and placed that event firmly in its political and social context, which most on the British left ignored. Lynch wrote:

“Poets and dreamers do not make revolution. There must be popular unrest behind even the smallest revolt. In Dublin it is impossible for men and women of the working class to live like human beings. The conditions under which they live are more deadly than the trenches; out of every six children born, one dies. Can we wonder that high spirited men and women, seeing their wrongs so ignored, have allied their discontent to that of political reformers?”

And then, of course, there was one Vladimir Ilyich Lenin, who, answering international Marxist critics of the Rising wrote, “Those who expect to see a pure revolution will never see one”, and went on to reply to those who said it was a “putsch”:

This defence does not explain the explicit motivation of the Easter Rising participants. For this it is first necessary to understand the international and local context. For hundreds of year the Irish had sought to break free of English political and economic domination of their country. For most of that time there were also opposing views in Ireland both on how that should be achieved and to the extent to which that domination should be ended. The Irish Republican Brotherhood and the Irish Citizen Army were firmly on the militant wing of that tradition. That is, they wanted complete separation from Britain and the creation of an Ireland which, as Connolly wrote in 1897, would be “the natural depository of popular power.”

In the same article where this sentence appeared Connolly also observed that “all bourgeois movements end in compromise” and “the bourgeois revolutionists of today become the conservatives of tomorrow”. By 1914, that had become only too apparent in Ireland. The Irish nationalist party under the leadership of John Redmond had signed up to support the British in the Great War and had urged Irish people to join the British Army. In return they were promised Irish “home rule” at the end of the conflict, basically what today could be compared to devolution, although a much milder version than what Scotland now has. Both for Connolly and the IRB, Redmond’s compromise was a disgraceful, and one bought with the sacrifice of thousands of Irish soldiers in Britain’s war. As IRB leader Padraic Pearse wrote, “The men who have led Ireland have done evil things”, and one does not have to have sign up to this rather metaphysical framework to endorse its depth of emotion.

Thus, for Connolly and Pearse 1916 was not just a revolt again the British it was against the “bourgeois revolutionists” of Ireland. For Connolly especially it was also a war against the Great War. Indeed he explicitly stated, just before the Rising, that it was the circumstances of the war that necessitated an armed revolt. At the start of that conflict he had written that, “should the working class in Europe, rather than slaughter each other for the benefit of kings and financiers proceed to erect barricades all over Europe…we should be perfectly justified in following such a glorious example”, but, of course, that did not happen, at least until Russia in 1917. So instead it was up to the Irish: “Ireland may yet set the torch to European conflagration that will not burn out until the last throne and last capitalist bond and debenture will be shrivelled on the last funeral of the last war-lord.” Again, self-evidently, that did not happen, but that doesn’t mean it wasn’t worth the effort. Furthermore, it is also worth remembering that the Rising’s defeat was all the easier because one of its presumed supporters, the Irish Volunteers, were ordered not to participate by its leadership. And, If nothing else Connolly’s methodology, of seeing a national revolution as part of an international struggle remains an important contribution to revolutionary thought and practice.

There was another important context behind socialist participation in 1916. This was the inclusion in Britain’s home rule proposals of 1914 of the likely partition of Ireland. For Connolly especially this too was a disaster, for it meant the permanent division of the Irish working class. A consequence of this, he predicted, would be “a carnival of reaction” on both sides of the border. “All hopes of uniting the workers irrespective of religion and old political battles will be shattered” he wrote. 1916 and the revolution that followed did not manage to prevent partition, and indeed something pretty close to the carnival of reaction did subsequently follow. Which, in itself, is justification enough for trying to prevent it.

Much of Connolly’s motivation for participating in the Rising passed British socialists by in 1916, although anyone who had read his writings on socialism and nationalism and on the war would hardly have been surprised. In the five years which followed those in Ireland who sought to secure the Republic declared by the Rising participants asked more questions of the British left and trade union movement. As the post-war period was also one of the most militant in British working class history those questions had a particularly important relevance. Again, they were both universal and local. They were about parliamentarianism, armed struggle, general strikes, dual power, socialism and nationalism and, in the local context, Ireland’s divided working class. The questions were as relevant to the battle for the establishment of Connolly’s “popular power” in Britain as much as in Ireland. The Easter Rising was only the start, but the participation of Connolly and his socialist comrades in the Rising made that start possible.

* “The Easter Rising: Comrades of Ours”. :
http://socialistresistance.org/8167/the-easter-rising-comrades-of-ours