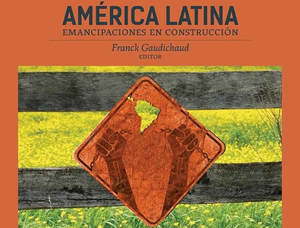 By the end of 2015, researcher and teacher Franck Gaudichaud published in Chile the book “Latin America: Liberation in progress”, which compiles texts from different authors on several political processes of emancipation in the sub-continent. Venezuela, Colombia, Chile, Argentina, Ecuador, Uruguay, Mexico, Brazil and Bolivia are present in the book, preceded by a general study by the compiler. The daily Resumen Latinoamericano talked with Gaudichaud about the book.

– In the prologue, preface and introduction of the book you insist on the need to seek forms of struggle and of life that suit each people. According to your experience, what conditions are necessary to make this possible?

It is true, several texts of this book explore that theme, the search for a “way” for a process of liberation, to get rid of the bonds that tie us down and oppress us. In one of the articles about Colombia, there is an idea of “bonds that liberate us”. That text speaks of the experience of an aboriginal community that lives on the Sinú River shore; which in a context of war and facing an environmental disaster and an hydric problem, manages to create life in community through sustainable agriculture.

Through this and other experiences, we can see that to achieve new forms of social life we must previously go through an experience of collective or community organization, to have spaces where people can debate, take collective decisions and face any kind of aggression or difficulties. It is also important to build common core ideas, that is, a common ground for organization that makes the community as democratic and participative as possible.

Often, this is triggered when the community faces a conflict, because antagonism creates a clear idea of “us” and “them”, and this sense of “us” is what allows to create community life.

In his search, what is the importance of retrieving and restoring concepts and interpretations of the pre-colombian cultures?

I believe that indigenous or native peoples in Latin America have brought back key concepts against neoliberalism into the continental political agenda, particularly in the last 15 years.
An example is the fight against extractivist multinational companies, and their plundering. Native communities were able to confront them in several countries and in some cases were able to create alternatives. The comeback of community or communal-neighborhood life has also been important, with its “pros” and its “cons”, obviously —we should not romanticize “natives”, or consider them out of context, as if they were not a part of society. Without a doubt there are also cases of chieftainship among natives, and reproduction of the patriarchal system and a pressure to blend into the global capitalist order.

Since the end of the 90’s to these days, there have been several leaders and parties coming to power that have raised hopes of a restitution of rights for the population of their countries. In general, what’s your analysis on the trajectory of these governments and how do you explain the loss in support from the people during the last years?

There is much talk about a progressivist “cycle”, and lately there is talk about a probable “end”, or at least reflux, of that cycle, and the loss of strength of governmental progressivisms. In fact, these governments (some radically national and popular, some of center-left denomination), are a result of a profound crisis in the hegemony of neoliberalism in a part of the region, particularly in South America.

Correa, Morales, Chávez, Néstor Kirchner, Cristina Kirchner,and to a lesser extent, Lula da Silva, come from that cycle of growth of social, union, peasant and popular movements, with a profound anti-imperialist and sovereignist nature. But, obviously, the Bolivarian-Venezuelan process is very different (because of its radical nature since 2002 or 2003) from social-liberal governments such as Rousseff’s in Brazil or the progressivist Peronism of the Kirchner presidents.

However, more than 15 years after the election of Chavez, we see an important flowback at a regional level and an exhaustion of the “wind of change”.

There are clearly visible obstacles that these governments will have to overcome, and political contradictions within them, in a context where the right is pressing forwards and Washington is changing its strategy. Once again, it is evident that reality can’t be changed radically (that is, from the roots up) only through institutions, “from the top”, and also that the left can win elections and access the government, but this does not necessarily mean that the popular masses, automatically, gain power.

Therefore, some progressivist or national-popular governments suffer this flowback because they promoted it, through co-opting, institutionalizing popular movements, making “passive revolutions”. Without fight, without popular movements, there can’t be pushing forward or confronting capital. In fact, [Vice President of Bolivia] Álvaro García Linera himself acknowledges that this would be a “creative tension” for the revolution, but that it could only be creative if there is a permanent dynamic, a dialectic tension between government and popular power, that erodes the bourgeois state, but this bond seems broken in several countries.

Today, in fact, several movements are criticizing governments or presidents because they consider that they didn’t fulfill their promises and promoted the continuity of extractivism (for example, in Ecuador), or protest against bureaucracy, corruption, alliances with the bourgeois (like in Venezuela and Brazil).

Extractivism and production of raw materials for export is a central characteristic of Latin America’s economy since its colonization. How would you describe the policy of these governments on this subject and what are its consequences?

I believe that a core issue in the electoral, social and political backflow is the weakness of the changes in the accumulation model, the continuity of extractivist plundering and some discontent among the middle class and working class, plus some specific elements that vary across countries (such as economic war in Venezuela or corruption scandals in Brazil).

Argentine economist Claudio Katz speaks of a “dual situation”: political progressivism and continuity of extractivism, that is, new degrees of sovereign autonomy in the geopolitical level, while the dependency on exports of raw materials grow in the economic level. The heritage of 5 centuries of colonialism is still strong. Nobody says it can be overcome in 5 minutes, it takes a profound and slow process of transition. But we must analyze the direction in which “progressive” public policies are headed; and see if they are in fact headed towards a post-extractivist transition where there is sustainability and an inclusive economy, less predatory, that impulses popular power.

And, in this case, as Maristella Svampa, Eduardo Gudynas, and Alberto Acosta say, progressive governments have had some golden years thanks to a very high price on raw materials, and they distributed some of that profit among the poorest, which of course is very important, because it allowed millions to overcome poverty and it helped rebuilding the state. But now prices are dropping and the weakness of that rentier logic is beginning to be seen, along with the consequences of not having transformed the unequal structure of society.

Franck Gaudichaud is a doctor of political science, lecturer in Latin American Civilization at the University of Grenoble (and currently visiting researcher at the University of Chile) and author of several books on Latin America. The latest is Chili 1970-1973. Mille jours qui changèrent le monde, Presses Universitaires de Rennes, 2013. He is co-president of the association France Latin America and participates in the editorial committee of the site www.rebelion.org. He is also a member of the Latin America working group of the NPA.l.